If you’re paying attention to the virtual reality market, 2017 would appear to be a pretty awful time to start growing a VR hardware startup.

OculusVR’s Kickstarter campaign took place more than five years ago and since then there’s been a burst of activity in the VR market that has driven a lot of hype though actual sales might not have reached stratospheric expectations.

This is not stopping Pimax VR, a Shanghai based startup founded in 2015, from planning to launch an ambitious headset that will likely retail for double the price of current high-end VR hardware. The company’s Kickstarter crowdfunding campaign closes tomorrow and it has already raised more than $3.8 million.

The Pimax 8K headset (which will run on Valve’s SteamVR platform) gets its name from the dual 4K LCD displays that give the device its large hammerhead shark look. For many, what’s more exciting is the headset’s bizarrely wide field-of-view. While current generation headsets are often somewhere between 90 and 110 degrees, Pimax is aiming for 200 degrees.

I had a chance to take a look at the latest prototype of the headset and chat with Pimax CEO Nordic Ren about the company’s ambitions and how it possibly plans to succeed in a market that has Facebook, Google and Microsoft staking claims.

While everyone else is going for the mass market right now, Ren tells me that he plans to succeed by capturing the attention on the high-end. “HTC and Oculus are good but not good enough,” he says.

It seems evident that Facebook’s Oculus is only going to be moving more resources towards all-in-one headsets and away from boundary-pushing PC headsets like the Rift. This is going to leave an exploitable subset of early adopters that will want a headset that can integrate with omnidirectional treadmills, haptic gloves, smell sensors and more while running boundary and bank-breaking GPUs. It’s definitely a weird niche of consumers, but considering the startup has already received pledges for nearly more than 5,000 headsets already, it’s clear they definitely exist.

What’s also apparent is that this product getting into consumer’s hands is also going to rely on more venture funding stacked on top of the several million dollars they’ll draw in from the Kickstarter. I asked Ren what the company’s biggest obstacle would be in shipping the headsets and he said getting “more money,” noting that the startup was currently putting together more funding from outside investors.

Though the Kickstarter pricing for the full 8K setup is $800 (the headset alone is $499), Ren said final retail pricing has not been decided, though I truly cannot imagine that this headset (along with controllers and sensors) will retail for less than $1,000 as a package.

There is frankly no way that the startup is going to deliver a product anywhere near its Kickstarter’s estimated delivery date of January 2018 given that the final design of central things like the lenses is still very much in progress. While Ren said the company would “do their best” to hit a launch somewhere in that window, he sounded a bit overwhelmed by the number of pre-orders the company had already received.

For comparison, Fove, a VR headset company that also launched their headset via Kickstarter closed its campaign in May of 2015 selling more than 1,000 headsets with a targeted ship date of one year later. They missed that date by 8 months and had to raise $11M in funding in the meantime. 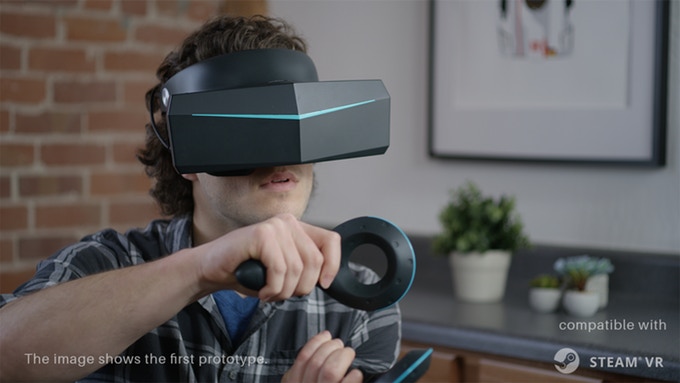 I had the chance to be one of the first people to check out the third major prototype of the headset, which expands the device’s signature wide field-of-view through a new 3-part frankensteined lens array that practically hugs onto your eyeballs. The lenses brought the virtual image to the outer reaches of my own vision in a way that was almost overwhelming but showcases an evolution for VR hardware that definitely lived up to Pimax’s promises. Notably, there were some major distortions if you tried to glance all the way left or right largely because games do not natively run at a resolution this wide and there’s some software stretching Pimax has had to do to display content at 200 degrees that was rendered at 180.

The high-resolution 4K displays offered a noticeable upgrade in sharpness and clarity though in terms of gameplay the field-of-view seemed to matter much more. There were still visible pixels as these are 4K screens but they are 4K screens an inch or two from your eyes. Nevertheless, the optics quality was very good on the prototype.

I demoed some familiar titles on the headset including Elite Dangerous and The Blu. The PC that was powering the experience was stocked with a 1080 graphics card, which — just for that one component — costs more than some of the full Oculus-ready PCs on the market currently. Pimax is aiming to make the final headset capable of running most titles while utilizing a mildly cheaper 1070 GPU, which Ren noted may still be a “little bit tough” to do.

For backers, the risks of funding a Kickstarter campaign for a hardware startup are lessened somewhat by the fact that the company has put VR headsets through production and the leadership is well-connected to manufacturing pipelines in Shenzhen, but the uncertainty is still there as to what exactly the finished project will ship with.

The prototype I demoed was running at 75hz rather than the 90 it hopes to ship with, Ren was discussing a redesign of the lenses on the way, and there are still many questions on whether the headset will be able to run on anything but the highest end GPUs. This will more than likely not ship on time, and the company is still making promises as to what extra things backers will be getting. Extra assurances made on the admission that the company may still need outside funding it has not yet secured in order to ship the device.

The Pimax 8K is a very exciting piece of hardware with some eye-catching features, but as the Kickstarter campaign draws to a close and the company looks to ship thousands of headsets, it’s apparent that while the displays are sharp, the next few months leading up to the targeted ship dates are much, much blurrier.