That’s the thinking behind Passionflix, a startup announcing that it’s raised $4.75 million in seed funding.

It’s not like romantic comedies are missing from theaters, or from Netflix, but Passionflix co-founder Tosca Musk (she’s a film director and producer, as well as the sister of Elon and Kimbal Musk) said the genre is dwarfed by action blockbusters.

“There just aren’t a lot of romances done at all,” Musk said. “It’s the biggest-selling genre in the world, but every time they do release a romance [movie], they say, ‘I can’t believe it did well.’ ”

So Passionflix offers a curated library of titles like Amelie and the 2005 version of Pride and Prejudice, plus original films and shows, for a monthly price of $5.99. (While the service is technically available worldwide, Musk said most of the licensed content is U.S.-only.)

The goal, Musk said, is to focus on “positive relationships between men and women” — though she later clarified that she wants to include a diverse range of content, including LGBTQ stories, a variety of romantic subgenres and featuring “every ethnicity, every age group.”

Users can browse the library based on what type of emotion they’re looking for, and even filter using a “barometer of naughtiness.” 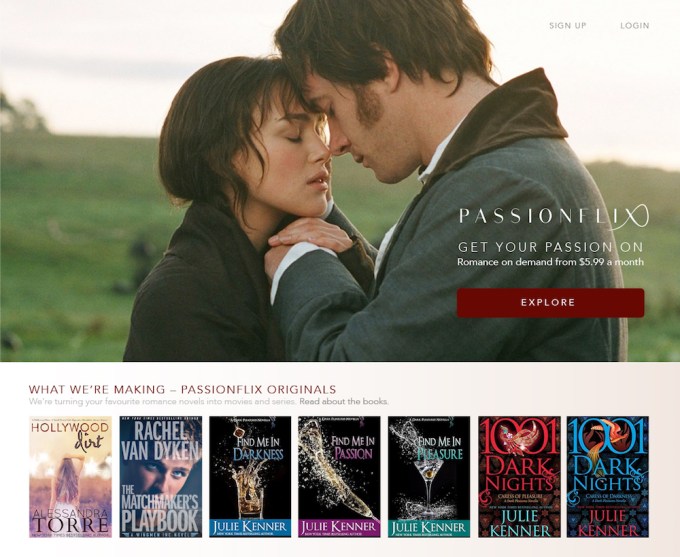 It might seem tough to bankroll a whole slate of original content after raising less than $5 million — compare that with Netflix, which says its content costs could hit $8 billion next year. However, Musk and her co-founders (producer Jina Panebianco and writer Joany Kane) come from the world of TV movies, where films can be made much more quickly and affordably.

Musk said they’re currently producing movies for less than $1 million each, though the costs will probably go up as they start working on series and move into genres like historical romance. The goal is to release an original movie or series every two months.

For their originals, Passionflix is turning to popular books, starting with Alessandra Torre’s Hollywood Dirt. Musk said she wants authors and fans to be happy with the end result, which means keeping the author involved in the scripting and casting process.

In fact, she said this also helps with Passionflix’s low-budget approach, because it means there’s no need for big movie stars: “Our authors are the stars.”

As for the seed funding, investors include Dana Guerin, Patrick Cheung, Jason Calacanis, Bill Lee, Lyn and Norman Lear (who produced All in the Family and many other TV classics) and Kimbal Musk.