Despite Facebook’s effort to rapidly self-regulate in the wake of Russian interference in the U.S. election using Facebook ads, CEO Mark Zuckerberg says he would support government regulation if implemented properly. Meanwhile, Facebook elevated its expense estimates for 2018 to fund security hiring.

“We’re working with Congress on legislation to make advertising more transparent. I think this would be very good if it’s done well,” Zuckerberg said on Facebook’s Q3 2017 earnings call. “And even without legislation, we’re already moving forward on our own to bring advertising on Facebook to an even higher standard of transparency than ads on TV or other media.”

In fact, Zuckerberg started the call fuming, declaring that “I’ve expressed how upset I am that Russians used our tools to sow distrust . . . What they did is wrong, and we’re not going to stand for it.” He noted that when Facebook focuses on something it gets it done, even if it takes time and mistakes, and he’s throwing the weight of the company behind the security effort. In fact, he invoked the way Facebook demolished Google+ and Snapchat, saying “We’re bringing the same intensity to these security issues that we brought to any adversary or challenge that we’ve faced.”

Today’s comments come after Zuckerberg wrote in today’s earnings release that “We’re serious about preventing abuse on our platforms. We’re investing so much in security that it will impact our profitability. Protecting our community is more important than maximizing our profits.” 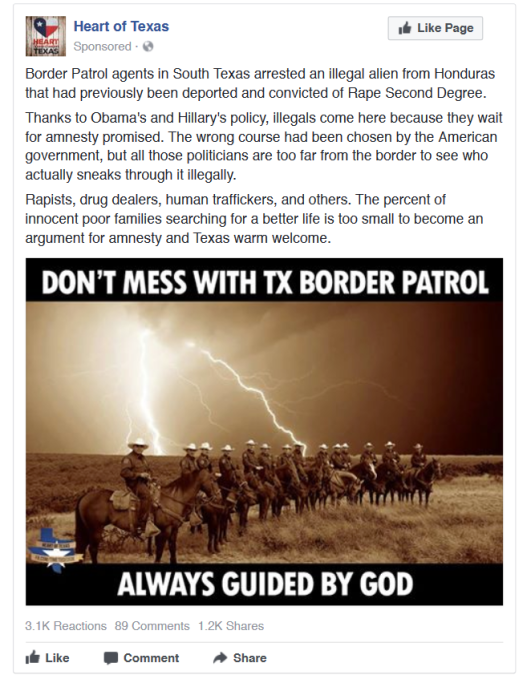 Example of a Facebook ad bought by Russian trolls to divide U.S. voters

Specifically, CFO David Wehner says Facebook plans for expenses to grow 45 percent to 60 percent in 2018 as Facebook invests in better security to thwart Russian election attackers, more content for its Watch tab of original video and research for its long-term bets on artificial intelligence, Oculus and augmented reality. That cash will go toward hiring 10,000 more content and ads moderators (though those won’t all necessarily be full-time employees), doubling its security engineering force and developing new AI to weed out bad actors.

COO Sheryl Sandberg said Facebook will stand by its policy of allowing issue-related ads to be served because of its support for free speech, but she said the company wants to elevate the quality of discourse on the platform.

Wehner admits that Facebook has increased its estimation of false accounts from 1 percent last quarter to 2 percent to 3 percent this quarter, or 41 million to 62 million monthly active users. That’s in part because Facebook said it started using a new technology to calculate these estimates, and because of a spike in false account creation in Vietnam and Indonesia. Facebook said the new estimation technology is also why it now pegs duplicate accounts at 10 percent of monthly active users or 200 million, versus 6 percent last quarter.

Overall, given Zuckerberg’s comments and its expense estimate increase, Facebook seems to be taking the Russian security and ad transparency issues extremely seriously. Though it might seem like this is a prioritization of security over profits, long-term Facebook must be a safe platform for legitimate discussion to maintain its place atop the hill of social networks.