Square is expanding its hardware lineup with a new point-of-sale device called the Square Register.

Square’s Head of Hardware Jesse Dorogusker explained that while the company’s existing products incorporate existing hardware (the Square Stand, for example, turns an iPad into a POS stand), the Square Register is “totally integrated — our hardware, our software, all in the box, all by Square.”

CEO Jack Dorsey added that the Register is meant to address concerns from larger sellers using Square or considering using it. For one thing, he said some businesses felt the Stand was “very consumer-focused,” so they wanted something “more professional.”

More specifically, Dorsey said the Register solves a big pain point by coming with separate screens for the buyer and seller. The Square team thought it was “clever” to design the Stand to swivel back-and-forth (“and it is quite clever”), but larger sellers wanted separate displays, allowing the customer to see each product as they’re being rung up.

The customer display also allows businesses to show off their imagery and branding. It’s detachable to accommodate different countertops. And it supports tap-to-pay, allowing customers to pay with their phone or watch without having to pass it over to the cashier.

Other features include Ethernet and offline support, so that businesses without good WiFi (say at a concert venue, or in the basement of a mall) can still use it without worrying about connectivity, and a five-port USB hub, so that the Register can be connected to other devices. 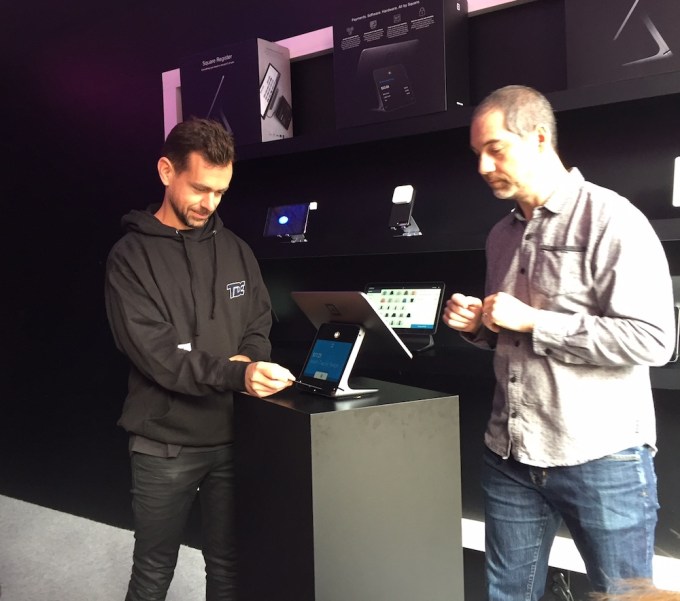 This isn’t necessarily going to replace the Stand or Square’s other hardware. Instead, Dorogusker said this gives larger sellers “two great choices,” and he added that the real goal is to replace “the giant beige and gray boxes that are out there in the world.”

As for whether Square is shifting away from supporting smaller businesses, Dorsey said they’ll “always be a part of our growth plan and always who we serve.” At the same time, he said the company decided early on that it wasn’t just going to focus on small and independent retailers: “The problem with that is, they want to grow … We can’t be a service that says, ‘Oh, you’re too big for us.'”

The Square Register will cost $999, plus a transaction fee of 2.5 percent and 10 cents per transaction. Dorogusker acknowledged that might sound a little pricey (“You wouldn’t consider $999 an impulse purchase”) but he said larger retailers are already spending thousands of dollars on point-of-sale hardware. Plus, the price is lower than buying two comparable iPads. Square is also offering a financing option where businesses pay $49 a month for 24 months.

Ben & Jerry’s Ice Cream is already using the Square Register in select locations. And as part of the launch, Square is hosting a pop-up with Top Dawg Entertainment at the Square Showroom in New York City.