Washington Congresswoman Suzan DelBene and Minority Leader Nancy Pelosi recently visited the University of Washington’s Computer Science school to discuss the workplace of the 21st century and women’s place in it. Their talk, delivered to an audience almost exclusively composed of young women in the sciences, covered a number of topics, but one given more serious consideration was that of sexual harassment in industries and disciplines dominated by men.

The past week or so has been notable for innumerable women describing instances of harassment, often using the #MeToo hashtag. Decades of alleged abuse by Hollywood mogul Harvey Weinstein set off this latest show of solidarity, and Silicon Valley evangelist Robert Scoble has been implicated by multiple women, as well. (Many of these complaints have been made over and over for years, but the last month has provided another opportunity for them to be heard.)

“These women that are coming forth, God bless them,” said Rep. Pelosi. “Maybe this is the tipping point that shows it has to be a zero tolerance policy. This is about respect.”

Rep. DelBene, who has been on the fore with programs and policies empowering women in the tech and science fields, emphasized the necessity of adjusting larger patterns of inequality, as well. 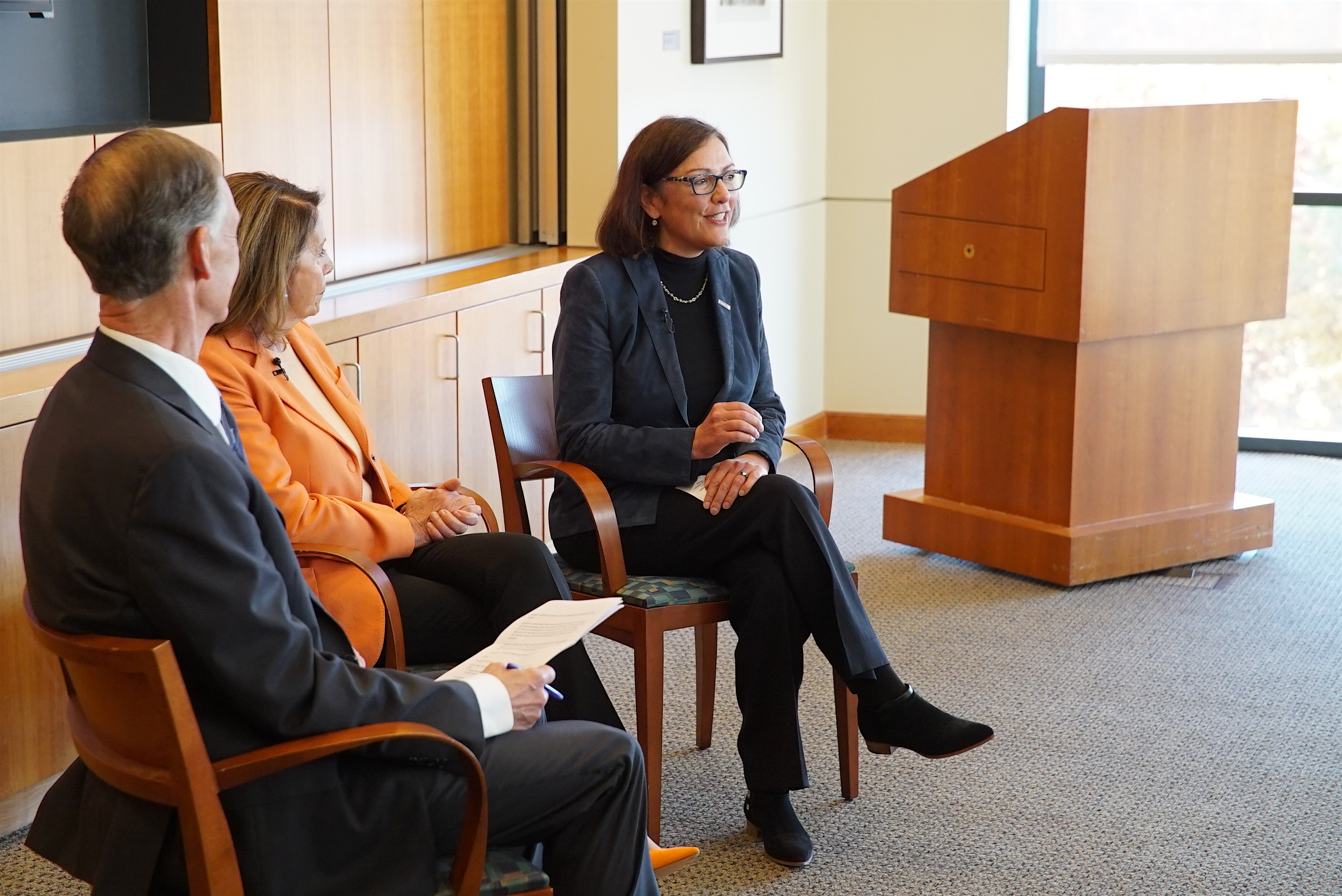 “It’s about having a culture where women feel there’s someone they can go to who will hear them,” she said. “That’s why having women in management, women on boards is so important.”

Pelosi continued: “We need to make it easier for someone to bring a complaint, and to review the climate it occurred in — and make sure it doesn’t weigh against them.”

Better representation at all levels was clearly a major goal of both women; DelBene studied the sciences and later worked at Microsoft, so she’s seen how many fields have changed over time — some for the better, some not so much.

She noted that when she started at Microsoft, she was pregnant and her colleagues were almost all young men, and there was little in the way of accommodation for her in the culture or policies of the company. That’s changing, but the numbers still aren’t where they ought to be.

“When I graduated in the ’80s, 37 percent of computer science graduates were women,” she pointed out. “Now it’s under 20 percent.” (But rising; Ed Lazowska, head of UW’s CSE school, noted proudly that 44 percent of the incoming grad students there are women.)

“It’s important that girls are encouraged and given the same opportunities as boys at an early age — get young women and girls that early exposure,” DelBene said.

“I’ve been saying: K-12, K-12, K-12,” said Pelosi. “Everything we do begins in the classroom. And nothing brings more money to the Treasury than investing in education.” 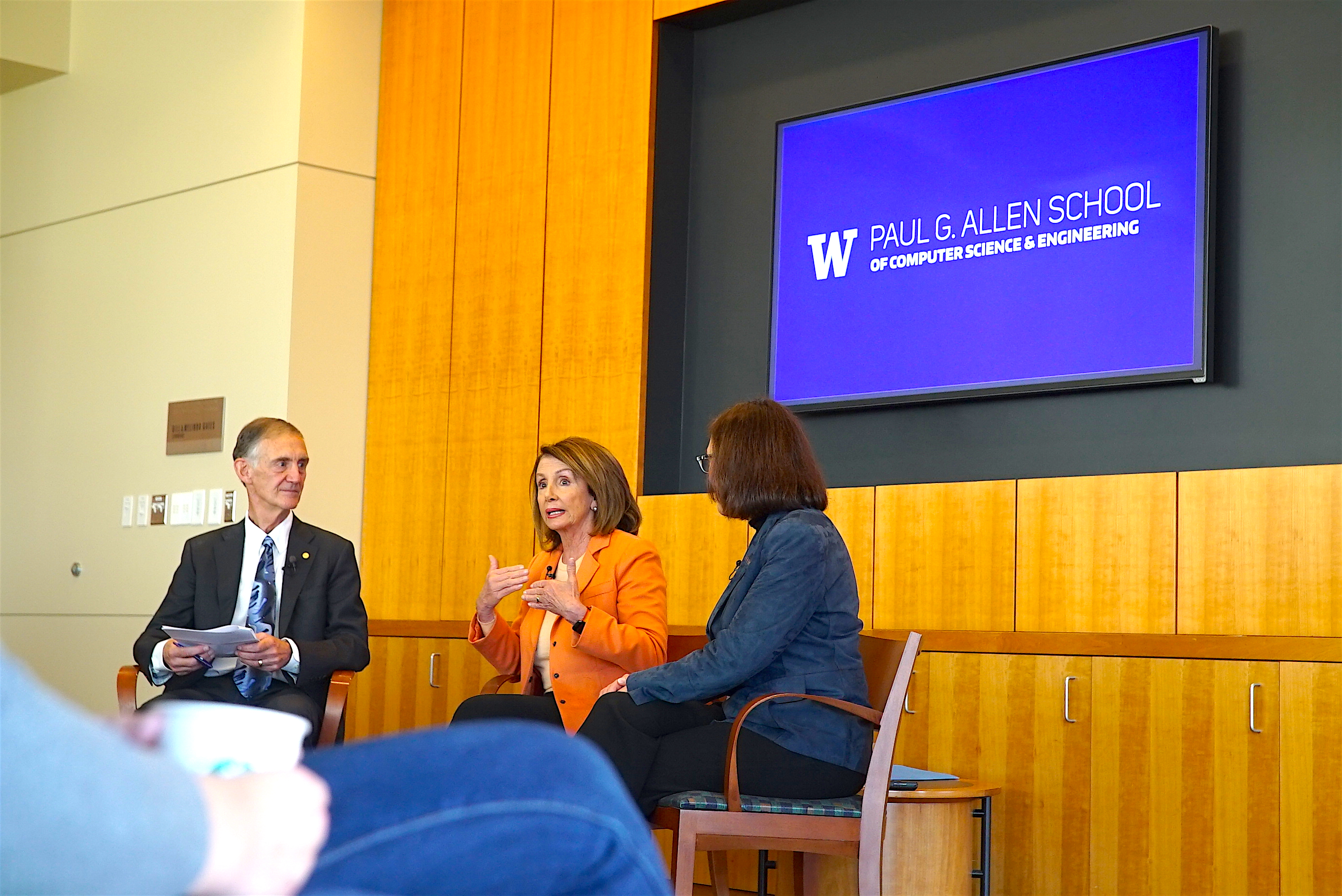 She also pointed out that every business is a tech company now to some degree, and that the skills learned in computer science and engineering fields contribute to success in nearly any job or field.

Both also agreed that reliable internet connectivity needed to be guaranteed as well, or even the most motivated kids would miss out on opportunities taken for granted in better-wired areas.

After answering a few questions on immigration (Pelosi noted that every president she’s worked under has been staunchly pro-immigration until now) and basic research (DelBene said the risk-averse strategy of for-profit businesses is leaking into academia), one audience member brought up the topic of “misinformation” — it’s worth noting that she and everyone else carefully avoided the now-loaded term “fake news.”

Rep. DelBene said that trust plays a big part in this, but also knowing where information comes from. “This comes back to validation,” she said. First the information has to be tied to a source, “and then people can decide for themselves whether they trust that source. Policy will play a role in this but we all have a role to play, as well.”

“Tech is a blessing, but it can also be exploited,” said Rep. Pelosi. “We have to enlarge the issue to something bigger — we have to do this as a public-private partnership and put the best minds on it. I believe tech can answer its own challenge. I believe they [i.e. internet companies] are patriots and they want to do the right thing.”

That would put her on the optimistic side of this recent survey of experts on the topic.

“But the biggest guardian of our democracy is a free and open press,” she concluded.

You can keep up with the latest from Congresswoman DelBene here, and Minority Leader Pelosi here.