SoundShare, an app that lets you text your friends entire songs, was already one of the more clever iOS applications available. Recently, the app rolled out an update that introduces a redesign and whole new experience called “Party Mode” that lets friends play songs through your device — like at get-togethers, where everyone wants to hear their favorite music. These collaboratively chosen songs can also stream through YouTube to your Apple TV, by way of AirPlay.

While there are other apps that support sharing music with friends — Apple Music has an iMessage app, as does Spotify — the benefit to using SoundShare is that you and your friends don’t have to be on the same service.

The app supports sharing music — including individual tracks and playlists — that can be streamed via Spotify, Apple Music or Deezer, as well as YouTube.

By default, the app uses iTunes as the music search engine and YouTube as the audio source.

In practice, what this means is that you can search on your connected Spotify account for a song, then send it over to a friend, who can listen to it using their Apple Music account.

However, if you prefer to watch the music videos when receiving songs, you can now opt to make YouTube your default player.

There’s a social element, too, allowing friends to see each others’ listens and shares (unless they’re using the new “stealth mode”).

Now users can start a “Party” inside SoundShare, then invite friends to control the music. The feature works over the app itself, not Bluetooth, which means it could also be used to have a remote co-listening party with friends, if you choose.

As friends add, remove and change songs inside the “Party,” your device will continue to update and play their selections. Friends’ songs can be added to play next or at the end of the queue, as they prefer.

The music can be streamed to any Bluetooth speaker connected to your iPhone, but for a bit of extra fun, you can opt to stream the music to Apple TV with AirPlay. This allows your group to watch the YouTube music videos, instead of just hearing the songs.

This collaborative playlist can be saved afterwards for later listening, too.

SoundShare is also one of the first apps to feature deep integration with Apple’s MusicKit, introduced in iOS 11. This allows it to load your Apple Music “For You” page inside SoundShare, and access your recommended mixes, like your Favorites Mix, Chill Mix and New Music Mix, as well as display daily playlists, daily albums, Spotlight playlists, new releases and more. 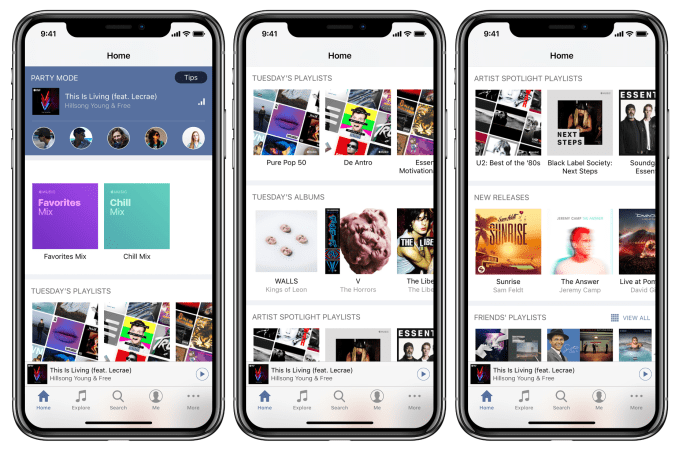 SoundShare is a free download on the App Store.

The company declined to share its user numbers. But developer Matt Abras, who’s based in Brazil, says it has attracted attention from a handful of music industry and tech execs, and the company is now in talks with some about doing deals.

The company is not yet generating revenue.