Translation earbuds might eliminate some utilitarian reasons to know a language, but if you want to understand jokes, read poetry, or fall in love in a foreign tongue, you’ll have to actually learn it. Unfortunately, products like Rosetta Stone leave people feeling burned after claiming the process should be easy while never helping you practice talking with a real native speaker. You know, the skill you actually want. Just memorizing vocabulary doesn’t make you fluent. 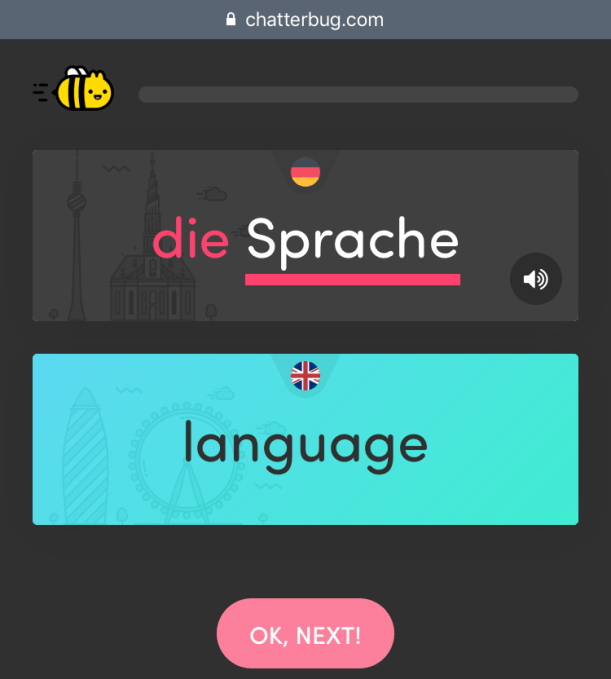 So after teaching millions of people to code better, a team of former GitHub co-founders and executives this week launched Chatterbug to combine the best of online and face-to-face foreign language learning. Starting with German, Chatterbug uses a homegrown video chat alternative to Skype that lets you simultaneously talk, type, read, and screenshare your way to becoming conversational.

But one of the co-founders’ past may cast a shadow over Chatterbug. Tom Preston-Werner resigned from his role as CEO and co-founder of GitHub following an investigation into allegations of harassment and intimidation of a female employee by he and his wife Theresa Preston-Werner.

GitHub employee Julie Horvath told TechCrunch that Theresa had bullied her about not writing negatively about the company, said she could read employees’ private chats and had spies at the startup, and verbally bullied her.

While an independent investigation claimed to have found no evidence of illegal behavior or gender-based harassment on Tom’s part, it did conclude that the former CEO showed “mistakes and errors of judgment” and “insensitivity to the impact of his spouse’s presence in the workplace and failure to enforce an agreement that his spouse should not work in the office.” 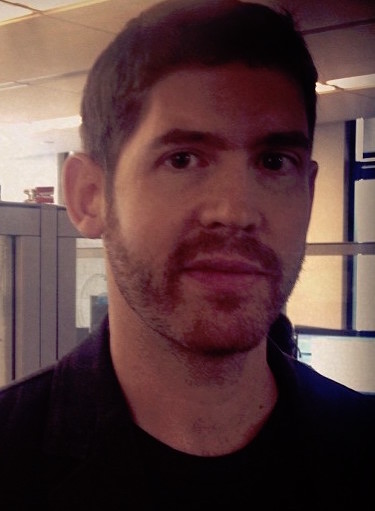 We asked Tom how he’s building Chatterbug differently this time around. “With some hindsight, the organic management structures at GitHub were a double edged sword. It unleashed a lot of creativity, but was fragile in handling conflict” says Preston-Werner. “From the very beginning of Chatterbug I’ve had serious conversations with the other founders on how to use those experiences to create a more robust channel of communications.”

Former GitHub head of comms and Chatterbug co-founder Liz Clinkenbeard tells TechCrunch “In retrospect, I think one of the major challenges at GitHub back then was that the company’s fairly flat structure sometimes made it difficult to know who to talk to about problems, and how to resolve them before they escalated.” With Chatterbug, she says the team has “been very open and deliberate about wanting to foster a safe and supportive work environment.”

It’s possible that Tom’s inclusion on the team could make it tougher for Chatterbug to hire talent, especially women. Though at least it seems the company is taking office demeanor and harassment issues seriously as it grows.

“I’ve always tried my best to empower my teammates and create a work environment that every employee will love. I haven’t been perfect at that endeavor in the past” admits Preston-Werner. “But I’ve learned much from those experiences and intend to use that knowledge to ensure that Chatterbug is a safe, welcoming, and productive place to work for women and other folks traditionally underrepresented in the tech industry.”

Cutting Skype Out Of Language Learning

Scott Chacon discovered what was broken about the current crop of language learning tools when he tried to pick up French via Duolingo and Japanese through Skype chats before spending time in the two countries. “I realized there was a gap between the digital apps that are super flexible but aren’t very effective at teaching conversation with real people, and the tutoring systems or in-person schools that were inflexible and super difficult to do” Chacon tells TechCrunch.

So he started building his own tools that would blossom into Chatterbug. The former GitHub co-founder and CIO recruited GitHub’s Clinkenbeard, director of engineering Russell Belfer, and Preston-Werner over late 2015 and early 2016. They raised a $1.8 million seed round from SV Angel and Berlin’s Fly Ventures to have early-stage allies on both sides of the pond. 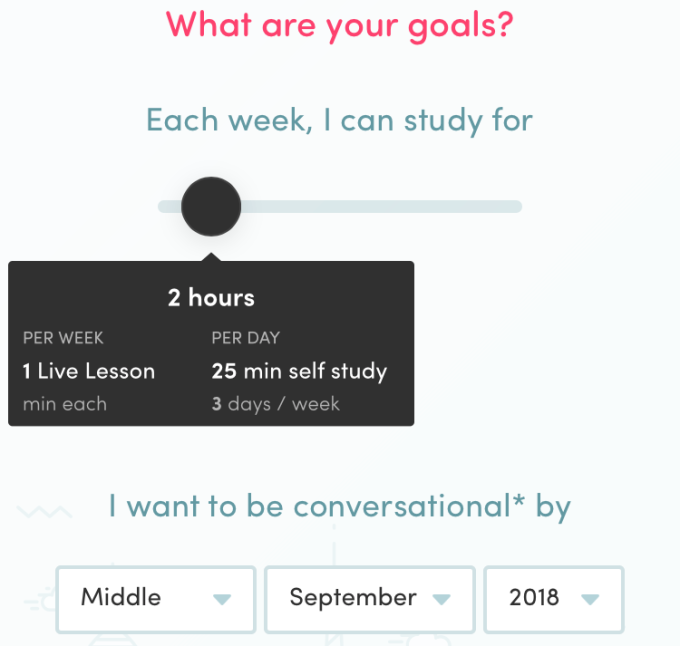 Now after some private trials starting in March, Chatterbug just launched the public beta of its German learning program, with Spanish and French coming next. And right out of the gate, it’s trying to set reasonable expectations for how fast people can pick up a new tongue. “The most difficult part of being in the business is that Rosetta Stone and other companies try to sell the idea that language learning can be easy” Chacon says. “Learning a language is not easy. It’s like a marathon.”

That’s why one of the first things you do in Chatterbug is adjust a slider for when you want to be fluent by, and it tells you how frequently you’ll have to study and be tutored. The app then gives you a foundation of vocabulary using “spaced repetition”, a study method employed by medical students where questions you get wrong get shown more often while you’re displayed fewer questions like those you got right.

Chatterbug understands when you almost get an answer right

Then Chatterbug schedules you for one-on-one tutoring over its video chat system designed specifically for language learning. Rather than having to commit to a weekly session time, only learn when your particular tutor is available, or fall behind if you miss a group class, you just punch in when you want to practice. Chatterbug pairs you with whatever appropriate tutor is available, gets them up to speed on your progress, and provides a personalized curriculum of exercises to do together based on what you’ve been screwing up.

The heavy engineering background of the Chatterbug team allowed it to create a WebRTC-based video chat that lets you view files together with your tutor and see each other’s cursors as well as talk and type. That’s a huge improvement over trying to pass PDFs back and forth or figure out what exercise the teacher is discussing. 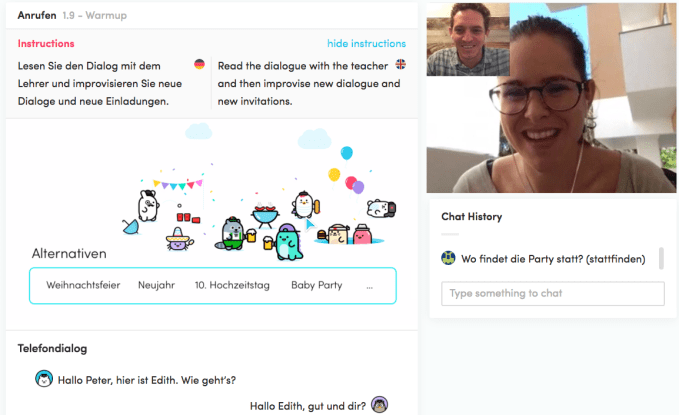 The pricing model flexes to accommodate your pace. You can get all the self-study features plus one live lesson a month for €15 or eight for €80 with extra sessions costing €12 each if you want to take a vacation next year. Or for €195 you get unlimited sessions and can learn a language in just a few months. Chatterbug is also going B2B, appealing to businesses trying to educate employees by offering discounts and easy expensing.

Turning Anyone Into A Teacher 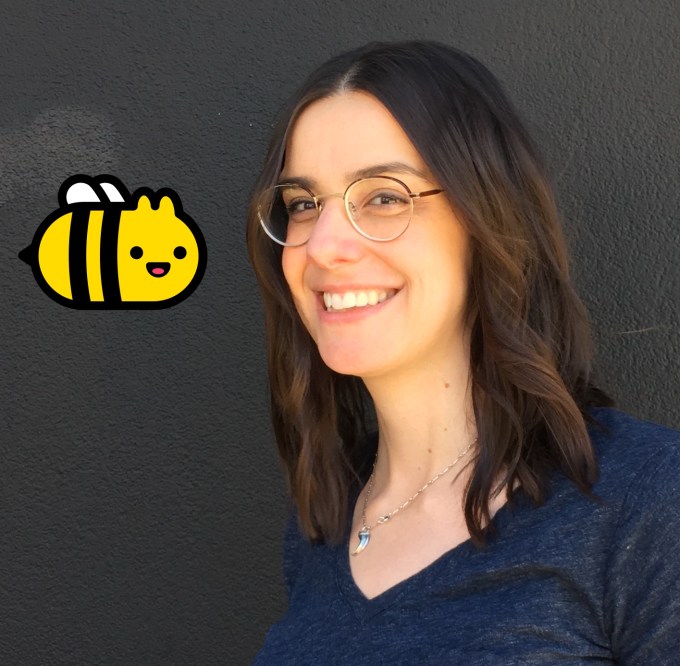 The startup’s data-driven approach could make it quick to expand to more languages and identify what’s toughest to learn. Chatterbug gives you the option to have it store recordings of your video sessions, and even give it permission to use them for research. Clinkenbeard studied linguistics at Harvard, and is using her expertise to help the company determine what are the most common vocab and grammar mistakes to help you avoid them.

Long-term, turning native speakers into tutors could offer new employment options to those lacking other quantifiable skills. “After leaving GitHub, I wanted my next project to be something that would positively impact a lot of people. As a filter, I’d ask myself ‘could this idea lead to the creation of a million jobs?'” says Preston-Werner.

Chatterbug faces a wide range of competitors like Rosetta Stone, Duolingo, Busoo, Babbel, and HelloTalk — some with deep pockets and a penchant for downplaying the difficulty of reaching fluency. Being real with people doesn’t always make for great marketing, and people who failed with other products exhibit a “healthy amount of skepticism” says Clinkenbeard. Then there’s the looming threat of advancing translation technology, like the new Google auto-translating Pixel Buds headphones.

Still, “I don’t think it will destroy the need for language learning” says Chacon. “At some point, in-person translators will be obsolete. Not sure if that’s in 5 years or 45 years.” But even if we solve information translation, culture translation will still be in demand. “You don’t want to wear an ear bud while you’re getting married” he laughs. At a time when the world is increasingly polarized and xenophobic, understanding your fellow humans without a technological intermediary could generate some much-needed empathy.