PayPal users in the U.S. will now be able to send and receive person-to-person payments over Facebook Messenger, the company announced this morning. The deeper integration with Messenger’s platform, which will also include PayPal’s first customer service bot for handling customer questions and requests for help, follows a series of tie-ups between the two companies.

Last year, Facebook and PayPal announced a deepened relationship that allowed customers in the U.S. to shop from online merchants using their Messenger chat bots, then transact in the messaging app via PayPal. Customers could also choose to link their PayPal account with Messenger in order to receive notifications and receipts from their online transactions within Messenger. 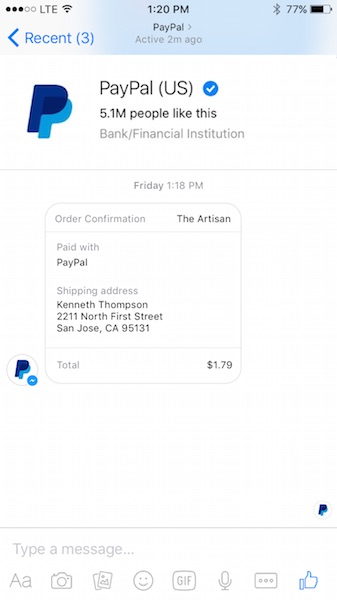 To date, over 2.5 million users have linked their PayPal account with Messenger, PayPal says, and that number is expected to grow with today’s news.

To be clear, this is an alternative to the existing payments feature that’s existed inside Messenger for a couple of years. The feature appeared, at first, to be Facebook’s own competitor to services like PayPal and PayPal-owned Venmo, Square, and others. But Facebook insisted it wasn’t aiming to build its own payments business – it largely saw the addition as something that just made Messenger better.

Earlier this year, Facebook added support for group payments, for example, but said it was still not taking a cut of transactions.

Starting today, Facebook is offering users the ability to choose PayPal as the funding source for peer-to-peer payments – and it can even be set as the default, PayPal tells us.

The new option is available by tapping the blue plus icon within Messenger, then selecting the green Payments button to send or request money. Here, you can select PayPal as the source when making a payment to a Messenger contact.

Beyond just being a simpler – and perhaps quicker – way to PayPal someone compared with using the native PayPal app, the addition will likely be used by those in Facebook’s buy-and-sell groups, including the local sales groups which are visited by some 450 million people monthly, according to data Facebook shared last fall.

While the Messenger integration will bring PayPal to a large audience, it’s not the first time PayPal has integrated with a messaging service – it’s already available via Apple’s iMessage, and can be launched through Siri.

When we asked PayPal if the plan was to offer a similar p2p option in other messaging apps in the future, PayPal COO Bill Ready said there was nothing to share right now.

“But I think this is part of a broader movement where we’re meeting the user in whatever context they’re in,” he added, noting that PayPal is also now available in services like Android Pay and Google Play, for example.

We also wondered if PayPal had plans to integrate Venmo into messaging experiences later on.

“There’s nothing we’re announcing with Venmo right now,” Ready replied. “But we really think about Venmo and PayPal as two interfaces that should get the user two common types of experiences,” he said. “Certainly, this general theme of users wanting to get p2p in new contexts – you see Venmo in iMessage and Siri – those types of things – we’re thinking [should be for] both PayPal and Venmo,” Ready said.

So…uh, yes, from the sounds of that.

In addition to person-to-person payments, PayPal’s bot is gaining new capabilities, too. While it will still support notifications and receipts, PayPal users will now be able to get customer service help just by chatting with PayPal’s bot.

The automated system takes advantage of the natural language processing capabilities in Messenger’s platform to understand what people are saying.

That means, you can say something like “oh man, I totally forgot my password” and the bot should understand you need a password reset. The bot can also help answer questions about your PayPal transactions. But when the user’s request goes beyond the bot’s abilities, you’ll be connected with a live rep for help.

PayPal says it doesn’t have customer service staff dedicated to Messenger alone, but is using existing reps to handle in the incoming inquiries.

“The unique thing here is that Messenger has opened up a platform that allows us to not only have a one-to-one communication, but there’s a platform where we can go resolve things right inside of Messenger,” says Ready.

The Messenger bot and p2p payments option are going live today for Messenger users in the U.S., but PayPal expects to roll it out to its other supported global markets in time. Because of the size and scale of both companies, the feature will be rolled out gradually – which means you might not see it right away, but should soon.

The feature will be available on iOS and web ahead of Android.