A year after acquiring Virgin Mega, Nike is revealing some of the early results of its experiments with augmented reality and community-building.

Virgin Mega was a startup backed by Richard Branson’s Virgin Group that focused on fan communities and shopping. Ron Faris, who led the startup, told me that Nike acquired Virgin Mega in order to explore those same ideas.

Since then, the team has turned into a “digital studio” called s23NYC. Faris said it still has a “startup culture,” with a small team of 24 startup veterans working out of the old Converse offices on 23rd Street in New York City.

s23NYC has taken over Nike’s SNKRS app, which offers insider access to and content around the latest sneakers. Faris, who is now the general managers of SNKRS and s23NYC, said he treats the app as “our digital piranha tank.”

“This is like our lab,” he said. “We drop something in the piranha tank and see how fast the piranhas swarm around it.”

For example, after Penny Hardaway took a sharpie to his sneakers so that they met NBA rules, the SNKRS app launched a stealthy promotion where users could unlock Royal Foamposite shoes by swiping over the screen to color in a digital photo — Nike describes it as “scratch-off cards for the digital age.”

SNKRS has also run geotargeted Stash campaigns, where users can purchase limited edition sneakers from the app — but only after they’ve traveled to a certain location in their city, whether it’s Washington Square Park in New York or pop-up flower stands in Los Angeles. 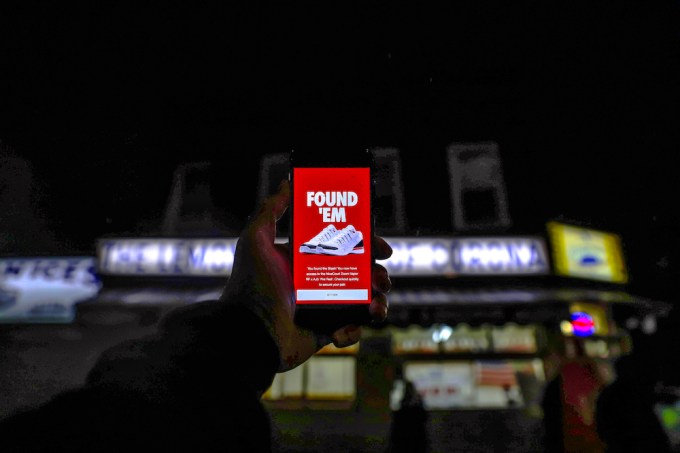 And the team ran a promotion with Momofuku’s David Chang, where users had to capture an image of Chang’s Fuku East Village menu in the SNKRS AR Camera, which would bring up a 3D model of the Nike SB Dunk High Pro Momofuku and unlock the ability to purchase the sneakers.

Faris said these promotions are linked by a focus on scarcity and urgency, combined with the idea of giving sneakerheads the opportunity to “peacock” their knowledge. In other words, the most in-the-know fans can snag their own sneakers, then get bragging rights by sharing that knowledge with others. For example, Faris said users were posting photos of the Fuku menu on Instagram, and they’d hang out at a Stash location to help others unlock the promotion.

Faris added that one of the goals is to use technology to capture “only the good of lines, which is the tailgate, while avoiding the bad, which is where you feel like you’re at the DMV.” So even when users are directed to a certain geofenced area, there’s no actual line to pick up the physical shoes. That means it’s less of a cutthroat competition, and it doesn’t come with any tedious waiting.

Next up, Nike plans to launch SNKRS in China and Japan later this year (the app is already available in the United States and Europe). Faris also said his team is working on an initiative called Stash Squads, where people who live outside a given city can still participate in a Stash promotion by forming teams with locals.