People often stop after Alexa, Siri and Google Assistant when rattling off the list of smart assistants. Cortana really gets no love at all, outside of stories about Windows 10. The oversight can be chalked up, at least in part, to the fact that AI has been mostly desktop-bound. It’s true that Microsoft has launched Android and iOS apps for the assistant, but while all of the excitement in the space is happening on mobile and smart speakers, no one’s really bothered to take Cortana to the next level.

Microsoft certainly isn’t taking the initiative. The Surface team is too focused on its ever-growing line of convertibles. But hey, why build your own product to promote your smart assistant when someone else will do the heavy lifting? Harman Kardon is a pretty logical first company to bring a Cortana speaker to market. After all, the audio conglomerate is pretty platform-agnostic when it comes to AI.

Within the space of a few months, the company announced a Harman speaker running Alexa, a JBL line of products featuring Google Home and Invoke, one of the first hardware products to attempt to extend Cortana’s reach beyond the desktop. It’s a goal Microsoft has clearly had for some time, as it watched Amazon, Google and Alexa walk away with the market.

As Surface head Panos Panay told me during a recent conversation, “As I move from device to device and room to room, you have to make sure that they’re all connected through Cortana. We believe in that.” For most users that goal won’t be accomplished by PC alone — after all, most people don’t keep stationary computers in every room of their home. At $200, the Invoke isn’t priced to offer that kind of ubiquity, but it’s at least a step in the right direction.

If you’ve played with a smart speaker for any amount of time, you pretty much know what you’re getting here. Though, to Harman’s credit, the company brings a little bit of design flare to the proceedings, with a conical design that tapers off as it gets to the top. The design language sits somewhere between the impulse to stand out with dramatic flare and to simply blend into the background. And it could be the fact that I’ve just gotten finished testing the new Echo, but at 9.5-inches (same height as the original Echo), it feels a bit tall.

Part of that can be chalked up to the fact that, more so than many first-party competitors, Harman does put some emphasis on the speaker part of the smart speaker equation. Getting decent sound out of one of these things requires a larger footprint than many of the devices offer. And indeed, Harman’s able to get pretty good sound out of the thing. It can’t touch the demos I’ve heard from higher-end products like Apple’s HomePod and the Google Home Max, but sound wise, it’s not a bad choice to fill, say, a small apartment. 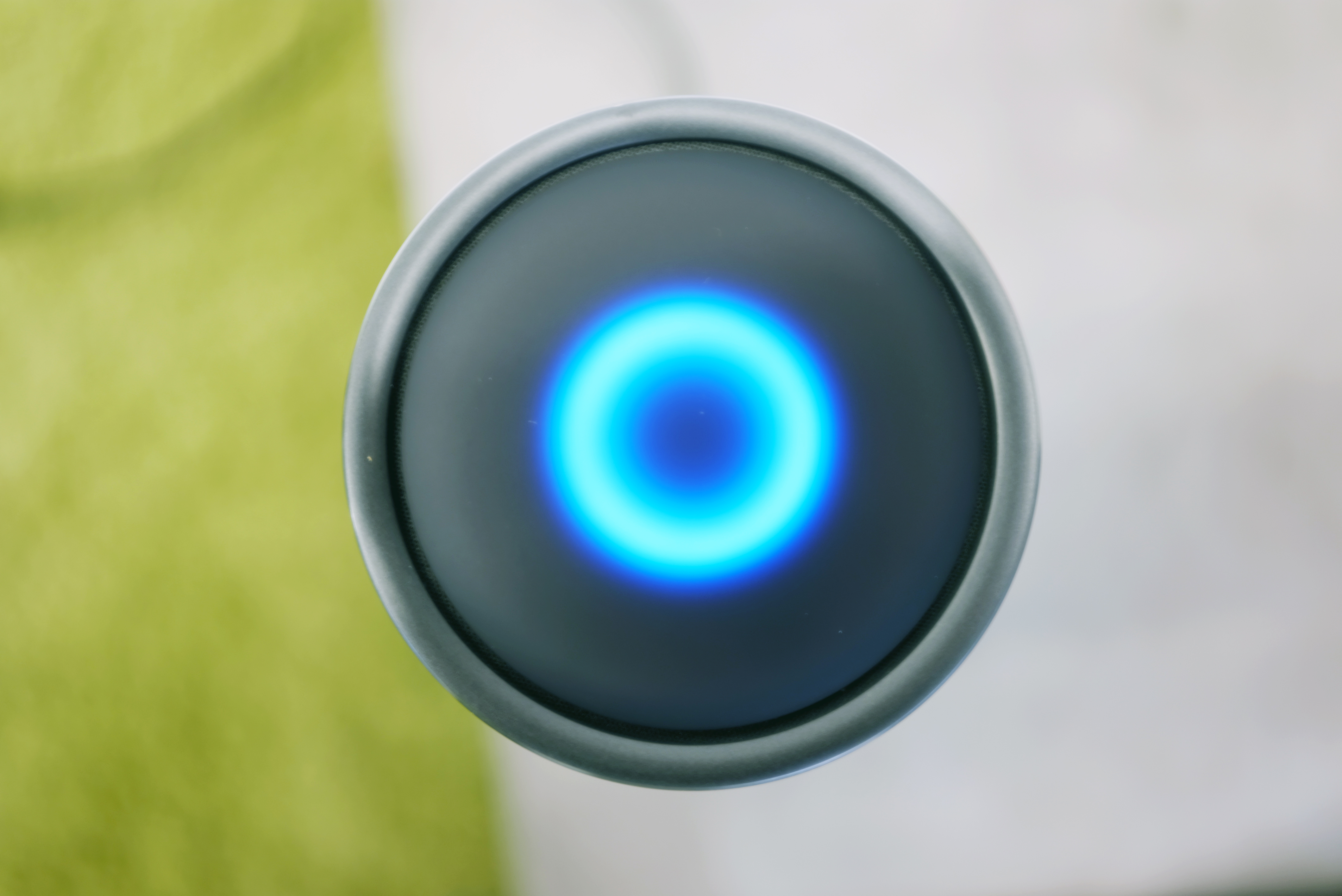 Harman’s also done a nice job emulating Cortana’s listening icon in the form of a morphing, glowing circle in a touch surface on the top of the device, which marks a nice change from the standard LED ring.

I’ll be honest, I haven’t spent a ton of time with Cortana before now. Playing around with the assistant is generally part of my process when I test Windows 10 devices. But the use case for a voice interface seems pretty limited on a product that allows you to interface with a keyboard, mouse, touch and pen. The opportunities to talk to your computer are relatively few and far between.

So interacting with Cortana on the Invoke was mostly a pleasant surprise. The assistant’s voice sounds great, and its functionality is pretty capable. The Invoke also has a few tricks out of the box it took other assistants a long while to catch up to, including the ability to call a phone. But as far as third-party skills go — keep in mind, the company only just announced the Cortana Skills Kit for build back in May. And smart home control for brands like Hue, Nest and Wink just arrived earlier this month. After all, a PC only really makes sense as a connected home device if you plan to keep it in one spot in the home — and Microsoft in general seems to be moving further away from stationary desktops.

This all prompts the very important question of: why? Or maybe it should be: who is this for? The most obvious answer is people who’ve grown attached to Cortana on Windows 10, people who have calendars, messaging systems and other apps tied up with the smart assistant. Though, frankly, I’m not sure that’s really enough of a user base to make much of a dent at this point. Which brings us to the other answer of who the Invoke is for: Microsoft. If nothing else, the product is an indication that Cortana is adaptable off of the PC. 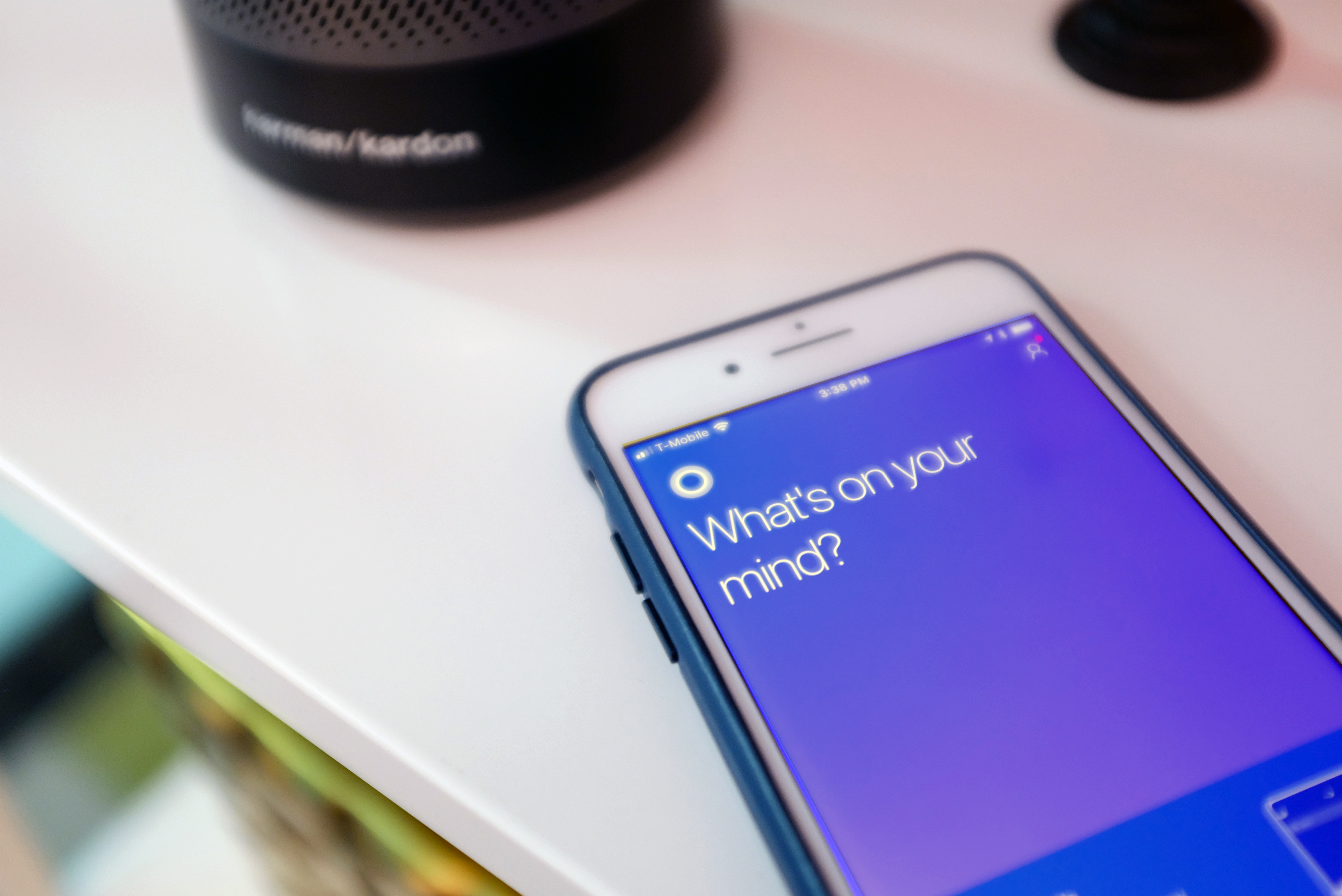 For most people, the Invoke doesn’t make a whole hell of a lot of sense. And maybe the decision to go head to head with similar Alexa and Google Assistant offerings wasn’t a great one (though, again, Harman’s just playing a numbers game with smart assistants right now). But there may me a niche that really does make sense at this early stage for Cortana: teleconferencing devices.

Sure, Microsoft finds itself actively courting creatives, of late, but business software has always been an important piece of the company’s DNA. Its ability to integrate Skype directly into the system is case in point. The implementation leaves something to be desired — Cortana doesn’t know the difference between “call” (i.e. phone) and “Skype” and its noise canceling is hit or miss — but the feature means you could stick the Invoke in the middle of a meeting room and start teleconferencing away.

Integrating Cortana into office hardware would be an interesting move, and a way to offer something that’s more than just an Echo competitor. As it stands, however, the Invoke appears to exist simply for the sake of existing.