“I make money from Facebook for my fake content in order to pay Facebook to promote my fake stories,” said Professor Chaos in one of the most brutal and succinct criticisms of the social network to date. The latest episode of South Park pulled no punches in its take-down of the Facebook fake news scandal. It poses Mark Zuckerberg as an indecipherable bully protecting fake news spreaders for profit and says kids can’t recognize lies on the app, while blaming everyone for allowing Facebook so deep into our lives.

Meanwhile, the episode pokes fun at Netflix for greenlighting low-quality original series, and riffs on the horrible abuse of women by Hollywood mogul Harvey Weinstein.

South Park’s intense, episode-long focus on Facebook’s fake news problems underlines the severity of the mainstream backlash. The blunt characterization of Facebook and Zuckerberg, and the direct harm fake news has on the show’s protagonists, could force the company to see its actions and explanations through the lens of the public. 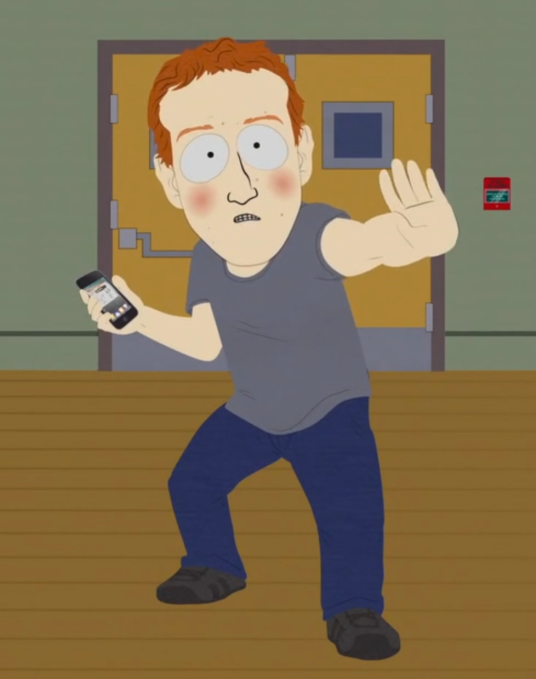 Spoilers ahead. If you care, you should probably just watch the 22-minute episode, which was both funny and jaw-dropping in how aggressively it attacks Zuckerberg, in particular.

The plot is essentially that the school boys of South Park have formed a superhero team and are trying to sell to Netflix an original TV series based on their adventures. But their nemesis, Professor Chaos, ruins their reputation and Netflix deal by publishing fake news on Facebook saying the heroes do disgusting things, and then promotes those stories with Facebook ads.

The line seems to reference, or at least align with, Zuckerberg’s statement about Donald Trump accusing Facebook of being “anti-Trump.” Zuckerberg responded that “Trump says Facebook is against him. Liberals say we helped Trump. Both sides are upset about ideas and content they don’t like. That’s what running a platform for all ideas looks like.” 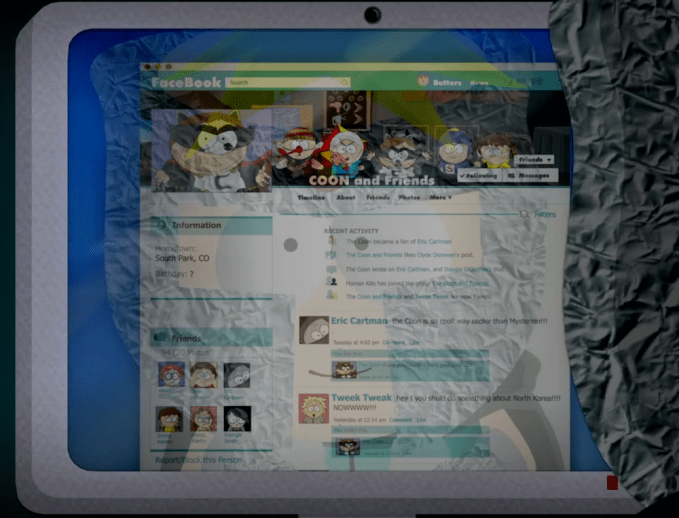 Professor Chaos goes on to build a profitable fake news and ads farm. The parents of South Park start seeing the fake news, and believe the kids are performing unspeakable sex acts on innocent victims.

But one parent stands up and says [Warning: Graphic Language]: “We all know there’s been a lot of mixing of truth and fiction on Facebook lately, and children lack the cognitive ability to determine what’s true and what isn’t on Facebook. That’s now why we have kids dressing up in costumes, eating poop, and having sex with antelopes in our town.”

The kids are actually acting pretty normal and can spot the lies, but the parents are the ones unwittingly buying into it.

“You all brought Mark Zuckerberg into your lives”

The parents invite Zuckerberg to town for questioning. But when one says “Facebook has become a tool for some to disrupt our country and our community,” Zuckerberg laughs off the critique, saying, “You say these things as if they are my fault, and yet they are not.”

When another responds, “Well you did create a platform with a monetary incentive for people to spread misinformation,” Zuck tells the town it cannot block his fighting style, and waves his arms while making sound effects like an old kung fu movie villain. This seems to be a dig on both Facebook’s unrelenting expansion into every area of life, and Zuckerberg’s at-times opaque public speaking style. 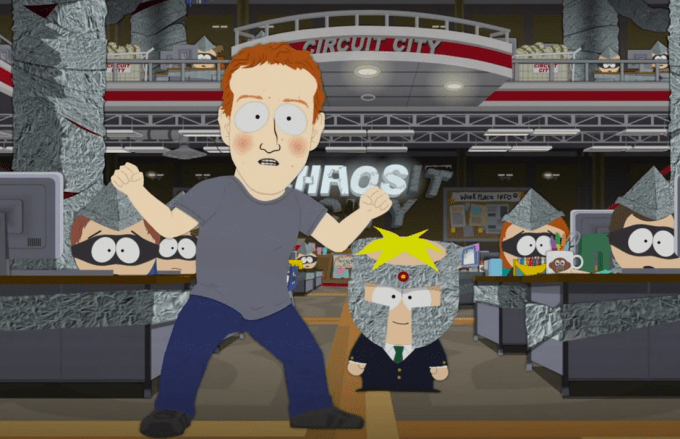 The heroes confront Professor Chaos and Zuckerberg, and say to the CEO, “This kid is deliberately lying about us on your platform for no other reason than to cause harm. Why are you protecting him?” “Simple, he paid me $17.23,” Zuckerberg responds. It’s clear that many see Facebook’s policy of allowing fake news because of free speech as an excuse for greed.

In reality, Facebook’s execs have so much money they probably don’t care much about earning more. My seven years of reporting on and interviewing the company lead me to believe it earnestly believes in free speech despite the ugly side effects, and this scandal has been driven by its idealistic leadership’s naivety about the worst of humanity rather than greed.

Every South Park episode, while laced with profanity and absurdity, resolves with a moral turn. In this case, the townspeople demand police shoot Zuckerberg, or at least kick him out of town. But the police chief asks, “Who invited Mark Zuckerberg to town in the first place?,” and the public glumly admits “we did.” “You all should have thought harder about this before letting him into your lives,” the chief chides the town, and everyone watching South Park. 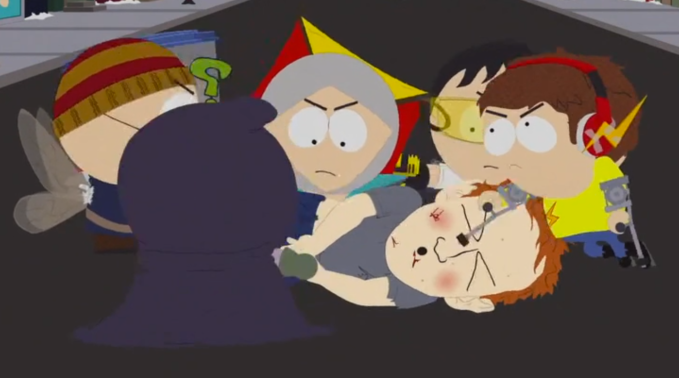 In the end, the kids gang-stomp Zuckerberg until he fights back, but catch just the second half of the fight on Facebook Live, in turn ruining his reputation despite his protests that it’s all untrue. With a touch of his smartphone, the defeated Zuckerberg neutralizes the fake news peddlers, with the show poking the real him for not using his power to more drastic action. The kids get their Netflix show, and Professor Chaos’ dad berates Vladimir Putin for setting a bad example.

The lessons are clear. South Park highlights how Facebook is profiting off fake news, which the company needs to avoid, even if it means making things harder for innocent advertisers. As for the public, we must accept some of the blame for Facebook’s influence, because we allowed ourselves to become so addicted to its content and to treat it like a verified news source.

Now the question is, did Zuck think it was funny?