Disney’s streaming service may still be years away, but the company this week has launched a new app for streaming Disney’s series, Disney Channel movies, live TV and music all under one roof, with the release of DisneyNow. The app is designed to consolidate Disney’s existing “Watch” streaming apps into one, including Disney Channel, Disney XD, Disney Junior and Radio Disney.

That suite of TV apps, aimed at kids 2 to 14 years old, have been downloaded over 40 million times since 2012, the company says. To some extent, it made sense to keep them as separate properties – after all, what a 2-year old wants to watch will be very different from a young teenager.

But times are changing. While it made sense for each property to have its own space on linear TV, it’s more cumbersome to have multiple apps installed on our devices for access to content from a single provider.

To address this problem, Disney has added personalization features within the new DisneyNow app so kids (or parents) can customize the app to their programming interests. In addition, there’s a “Disney Junior Only” mode that parents can enable if they want to keep the app focused on preschool-appropriate programming.

What’s also interesting about the new app is that it gives you an idea of how Disney’s forthcoming streaming service may work. 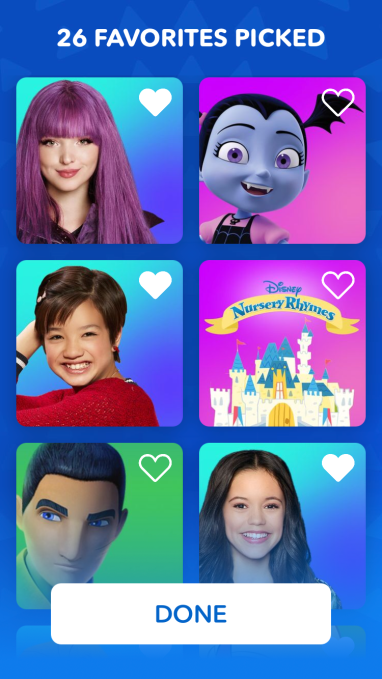 In DisneyNow, for example, each user can set up a profile for themselves, and select from over 180 Disney Emoji avatar character poses to associate with their account. Kids can then customize their setup by choosing their favorite characters and shows, and then receive recommendations about what to watch next.

The app will also remember where users left off, so they can resume watching the next time they log in.

And like Disney’s upcoming streaming service has planned, DisneyNow app offers a combination of content – not just shows and movies. There are also games, music, and special performances available, too. 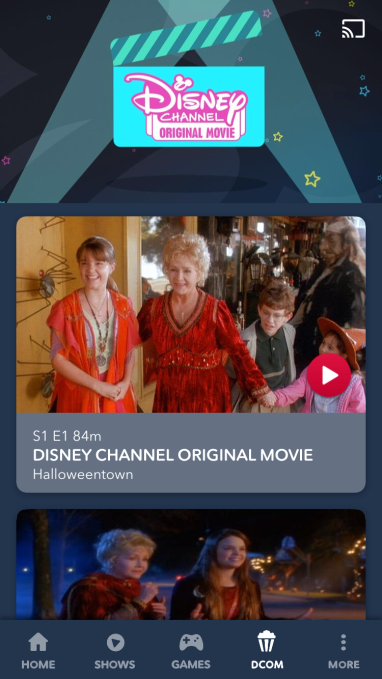 The app will include the ability to watch live, linear TV channels, as well as on-demand, in-season TV shows from its networks, like: “Andi Mack,” “Raven’s Home,” “Bizaardvark,” “Stuck in the Middle,” “Tangled: The Series”; Disney Junior’s “Vampirina,” “Elena of Avalor,” “Mickey and the Roadster Racers,” “The Lion Guard,” “Puppy Dog Pals” and “PJ Masks”; and Disney XD’s “DuckTales,” “Star Wars Rebels,” “Walk the Prank,” “MECH-X4” and “Milo Murphy’s Law.”

A selection of Disney Channel TV movies, curated from over 100 titles, will also be available, along with over 60 games featuring Disney characters, like the “DuckTales” adventure game “Duckburg Quest,” Princess Elena of Avalor in “Flight of the Jaquins” and the Villain Kids in the “Descendants 2 Wicked Style” activity.

Disney says it will release new games to the platform on a monthly basis. 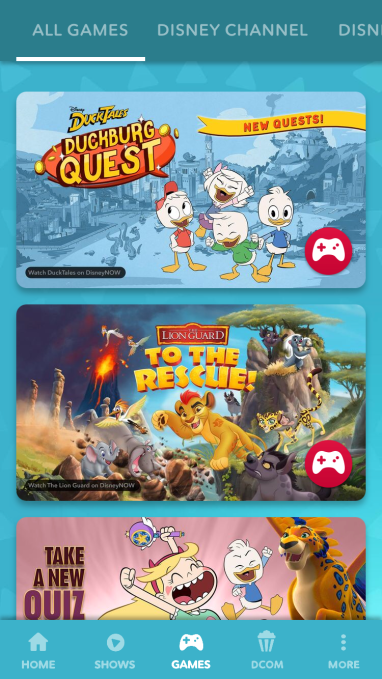 Radio Disney performances and in-studio appearances will be added to this app, as well, including those from Selena Gomez, Ariana Grande and Camila Cabello, and others.

The app is ad-supported via sponsorships, traditional or interactive TV commercials and sweepstakes, as there’s no subscription fee to use it.

However, DisneyNow is not an over-the-top streaming service, like the one Disney has planned for its 2019 release, nor will it include any theatrical movies, like those from big brands such as Pixar, Marvel, or Star Wars. Those are being saved for Disney’s big Netflix competitor. (It does have sections for Marvel and Star Wars though, for their TV cartoon series.)

While some content in DisneyNow available for free, to watch the full lineup, users will need to authenticate using their pay TV credentials from a supported cable, satellite or digital programming distributor.

The good news for cord cutters is that DisneyNow does work with your YouTube TV, PlayStation Vue, DirecTV Now, or Hulu credentials.

Of course, you could just watch Disney via those streaming apps’, but it’s better to install the DisneyNow app for the kids, so they don’t have to stumble through adult programming to find their favorite shows.

DisneyNow is a free download on iOS, Apple TV, Android, Fire tablets, and Roku. A version for Fire TV, Android TV and the web will arrive next year.