Urban transport navigator app Citymapper is experimenting with creating another transport service based off of analysis of the journey data its users generate — and using software it built to identify underserved transport routes.

Today it’s announced a tie-up with Gett‘s UK black cab hailing app to run two commuter lines of shared taxis in London, morning and evenings, between Highbury in North London and the Waterloo transport hub in the south.

It’s calling this “Project Black Bus” — black being the typical color of London’s traditional taxis. The Citymapper-Gett partnership presumably involves a revenue share between the pair on any booked journeys.

This is not Citymapper’s first experiment with extending London’s existing public transport network with some commercially routed additions. It already runs a(n actual) bus service — which it announced in July — with the bus route also picked based on analysis of its users’ city mobility data.

In that case it’s an East London late night route catering to partygoers. The route uses Citymapper’s own fleet of buses, distinct from Transport for London’s red fleet. The vehicles are also smaller than the average London bus and include a plethora of screens to help users understand where in the city they are — as well as USB ports to charge up their devices.

The bus service, which is called the CM2 line — technically it’s the second bus route Citymapper offered, after it ran a very brief bus trial in a different part of London — is fully integrated with Citymapper’s transport app, as you’d expect.

And so too is the new pooled taxi service — which it’s calling BB1: short for “Black Bus 1” (implying this is the first in a line (ha!) of such pooled taxi routes.

Users of its app will see the route in their suggestions — with an option to “Book with Gett”. 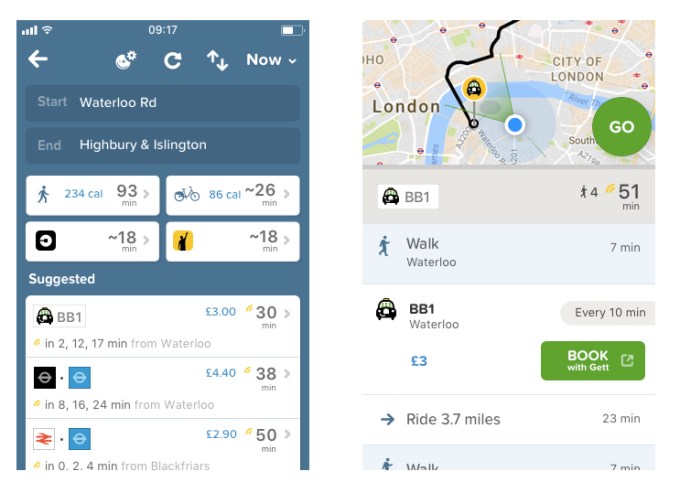 “Cabs can be shared by multiple passengers, just like on a bus, for a fixed price of only £3! (and psst.. the first ride is free). But unlike buses, you can get on and off anywhere on the route,” the company writes in a blog post announcing the new service.

With £3 pricing it’s significantly undercutting the cost of an Uber (and even an UberPool) — or indeed a black cab — for making the same journey. But the ride will cost more than taking a single trip on a TfL London bus.

The BB1 line will operate during the busiest commuter hours: So between 7–10am and between 5–8pm. Citymapper says it will start next Monday, September 25.

The company says it picked this route because there’s no direct Tube link covering this route, and also claims that existing public transport options “would require three buses or tubes”.

“It serves one of the largest gaps in the tube in zone1: Angel to Farringdon. It uses side streets that avoid jams and benefit from bus lanes,” it adds.

However this is actually a fairly vigorous massaging of the truth. While it’s certainly true there is no direct Tube link between Highbury & Islington and Waterloo, an existing TfL bus (the number 4) will take you all the way from Highbury Corner to Waterloo Road without you having to get up and change.

The same trip can also be done in just two Tube journeys: Either taking the Victoria Line & Bakerloo, or Victoria Line & Northern. So it’s not really that much of a faff to make this journey with existing London public transport options. (Also worth noting: Highbury has an overland train station too, with trains which can take you as far as Moorgate.)

Plus, as Citymapper’s BB1 route lets people get on and off anywhere on the line portions of the journey will certainly be directly replicating existing public transport routes.

And London’s extensive TfL bus network offers various route options to serve portions of the route, including Angel to Farringdon, if not being completely ‘door-to-door’; i.e. you may need to walk a bit either end. (Indeed, Citymapper’s own founder, Azmat Yusuf, has said of London’s bus network: “If you can figure out how to use the buses you can go anywhere.”)

Of course there will always be some people for whom traveling by cab is the preferred option, especially if it’s made more affordable for them to do so. (Uber’s popularity in London attests to that — it claims some 3.5 million users in the city.)

Even if rush hour congestion in London tends to make any form of street-level road-based transport one of the least quickest, least smart ways to get around (biking excepted).

Blogging about why it’s getting into taxi pooling via a tie-up with Gett, Citymapper implies it’s hoping to reduce urban congestion by encouraging existing taxi users to share their journeys — by making use of the fixed, pooled route — and thus reduce the number of cabs on the road at any one time.

Although if it ends up encouraging London commuters off of existing TfL buses and Tubes and onto London’s congested roads the service could well have the opposite effect — a risk which goes undiscussed in its blog.

Instead Citymapper argues that pooled taxi routes can offer a more flexible transport option to add to the mix, with routes able to be ‘edited and evolved to meet user needs’, adding that: “Regular buses can’t do that.”

Of course “regular buses” can’t change their route all the time because very large numbers of people rely on those routes. Whereas cabs that can carry — at most — five individuals at a time are not buses. And are never going to be buses.

Even if Citymapper is seeking to paint this taxi pool line in the livery of a bus — subtitling its blog as: “Black cabs running like buses.” And directly appropriating the word “bus” (“black bus”) for what is actually a commercial shared taxi commuter service. (For a little more perspective London’s bus fleet carries some 6.5M passengers per day.)

We asked Citymapper why it decided that shared taxis are the best option for this transport route — i.e. rather than running another of its ‘smart buses’.

At the time of writing the company had not responded.

Another consideration is how much the London transport regulator was involved in the planning process of the BB1 route.

If, as Citymapper says, the route is making use of side-streets there’s a potential for it to funnel more traffic down residential routes — which are exactly the sorts of factors taken into consideration by regulators when they are planning new bus routes.

So we also asked Citymapper how it considered the impact of running this taxi commuter route on local residents. And also whether it involved TfL in the route-planning process.

We’ve also reached out to the London transport regulator for its views on the service — and will update this post when it responds.

Safe to say, Citymapper is not the only startup seeing money-making opportunities in pulling a portion of users of existing public transport networks onto commercial alternatives. (Nor the only startup under pressure to start monetizing usage of its free app — Citymapper said in December it would start doing just that this year, having raised ~$50M in VC funding since 2011 from investors who clearly want to see a return on that cash.)

Ride-hailing behemoth Uber pioneered this process with its UberPool service which dynamically matches passengers with others riding in the same direction, charging a lower fare than for a full Uber as they share the car.

This strategy may be smart for the companies involved, but the question of how smart it is for already heavily congested and highly polluted cities is a whole other question.