Struggling with a sputtering wearables market, plummeting stock pricing and increased competition on the low-end of the market, Fitbit threw a Hail Mary. It vacuumed up a trio of startups and got to work in earnest on one smartwatch to rule them all.

By the time the Ionic was announced last month, CEO James Park had already talked the smartwatch up like some second coming. For every dismal fitness report, the executive had something new to say about the product that would turn around the company’s fortunes and prove, once and for all, that someone other than Apple was capable of selling a smartwatch.

The move’s a questionable one from the outside, looking in. Even Google’s efforts in the smartwatch space appear to have sputtered, if not entirely ground to a halt. And besides, the one company with true upward momentum in wearables at the moment is Xiaomi, a sprint to the top of the sales charts spurred on by $15 devices.

But there’s some precedent. The Fitbit Blaze was a sort of half-step into the smartwatch world. It had the form factor and some of the functionality, but fell short in its lack of embrace of things like an app store. Even so, the device was one of the better selling products in the space, pushing to the top of Amazon’s Android compatible smartwatch listings. The success came courtesy of Fitbit’s market positioning and the years of wearable-making experience the company brought to the table.

All of that’s present here, of course — and Fitbit’s also called in for backup. In purchasing Coin, Pebble and Vector, the company brings a robust feature set to its first true smartwatch — and, of course, signals that it’s not screwing around here. If nothing else, no one can accuse the company of half-assing it with Ionic.

There are things worth celebrating about the Ionic, above all battery life. The company says you’ll be able to get four days on a charge, and I found that to be not all that far from the truth. It’s really an impressive thing — you’re lucky if you can eke out a day with most of these devices. That’s the big, dark shame of these products that are intended to be with you all day and night. So, there’s at least one big takeaway for fellow wearable manufactures: when it comes to battery life, do better.

After wearing the Ionic around for a couple of weeks now, I feel I can state definitively that the smartwatch is perfectly fine. It’s not a revolution, and no, it’s not better than the Apple Watch. It’s a decent smartwatch experience built on top of years’ worth of robust fitness collection. It’s a solid first real foray into smartwatches for Fitbit, one that will likely get marketing traction off the bat based on Fitbit’s positioning alone.

Time is a flat rectangle 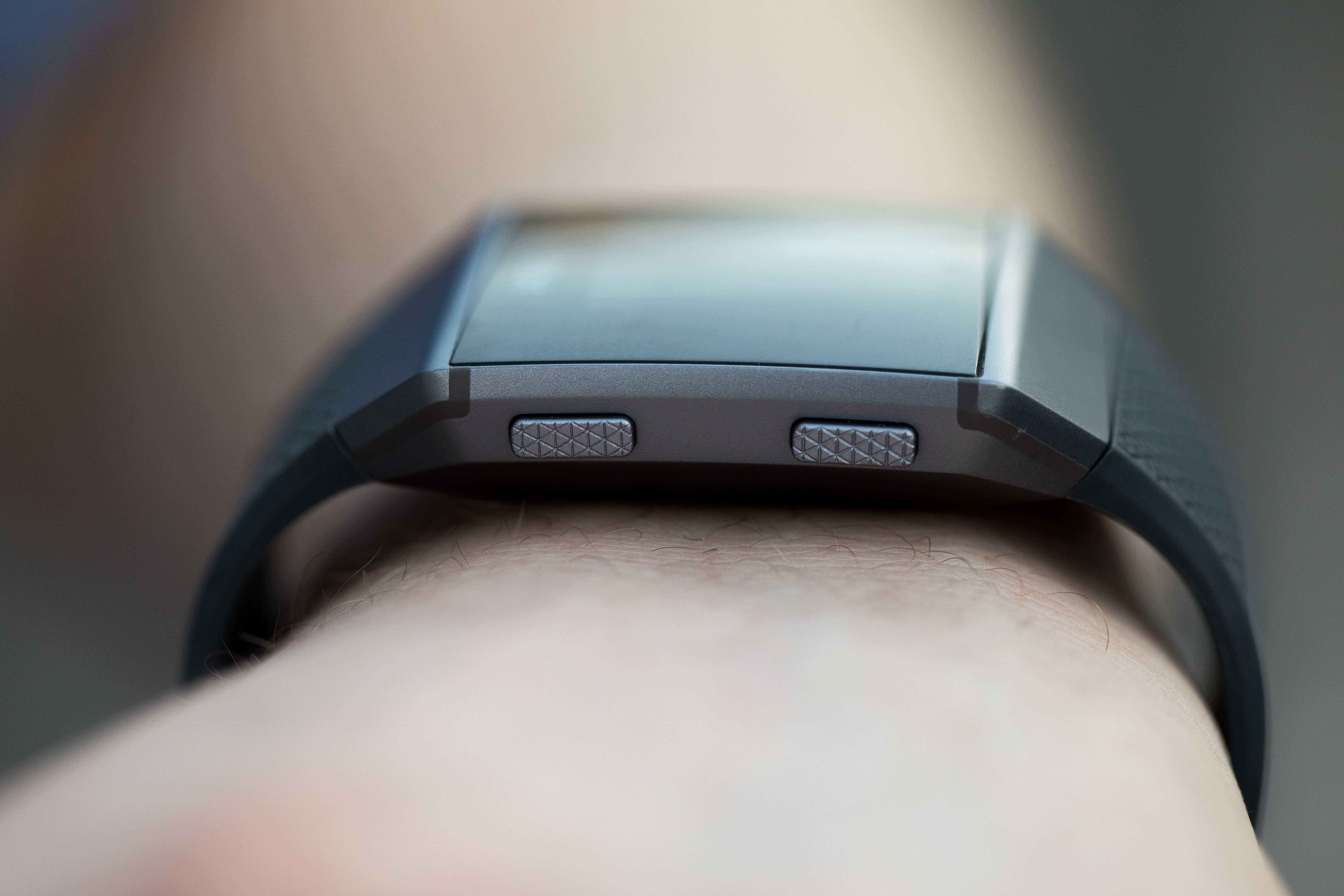 A point worth stressing: the Ionic actually isn’t that bad-looking. I know, I’m a bit surprised to be saying it myself. The early renders of the device looked kind of rough, and the official images aren’t that much better. I guess some gadgets, like people, just don’t photograph particularly well. In person, on your wrist, it looks fine. Not the flashiest wearable on the market, but far from the ugliest.

The Ionic is kind of… flat — or at least designed to appear so. The screen is mostly flush with the band, as though it’s all one big, continuous strap. In spite of that appearance though, the body of the watch still juts up from the wrist, courtesy of the internals and heart-rate monitor. The screen to body ratio is also pretty low, thanks to some beefy bezel on its top and bottom.

One poor design choice that jumped out immediately is the rigid connector between the watch and band. There isn’t any give there, which means the band can’t do a great job conforming to a variety of wrists. The more traditional watch design on devices like the Apple Watch makes them more adaptable. The Ionic, on the other hand, will feel unwieldy for many smaller wrists. Many wearables appear to have abandoned any pretense of appealing to a broad spectrum of users, but I’d expect more from a company like Fitbit that has already had a broader cross-gender appeal.

As for my own wrists, the Ionic fit fairly comfortably. It’s no where as unwieldy as many of the more massive watches on the market, and depending on your own comfort level, you may even find it possible to where to bed, to take full advantage of that sleep tracking.

The watch itself… the UI isn’t much to speak of from a design perspective. Fitbit’s gone with a sort of less is more approach here. Everything is big and bright and things are mostly laid out in a quadrant, in an attempt to make the most of the 1.47 inches of screen real estate. The time occupies about two-thirds of the default watch face, with small circles representing your step count, heart rate and calories burned. In a clever bit of design, the perimeter around each icon fills in as you progress closer to your goal.

It’s no coincidence, of course, that this is the information Fitbit opted to toss in front and center. The company has long known the lesson that’s dawned on fellow wearable manufacturers in recent years: fitness is the key to the wearable space. That holds even with high-end smartwatches. Apple has clearly taken the lesson to heart in recent generations, making the functionality more and more core to its own offering, while companies like Samsung have gone even more targeted with sport versions of their own wearables. 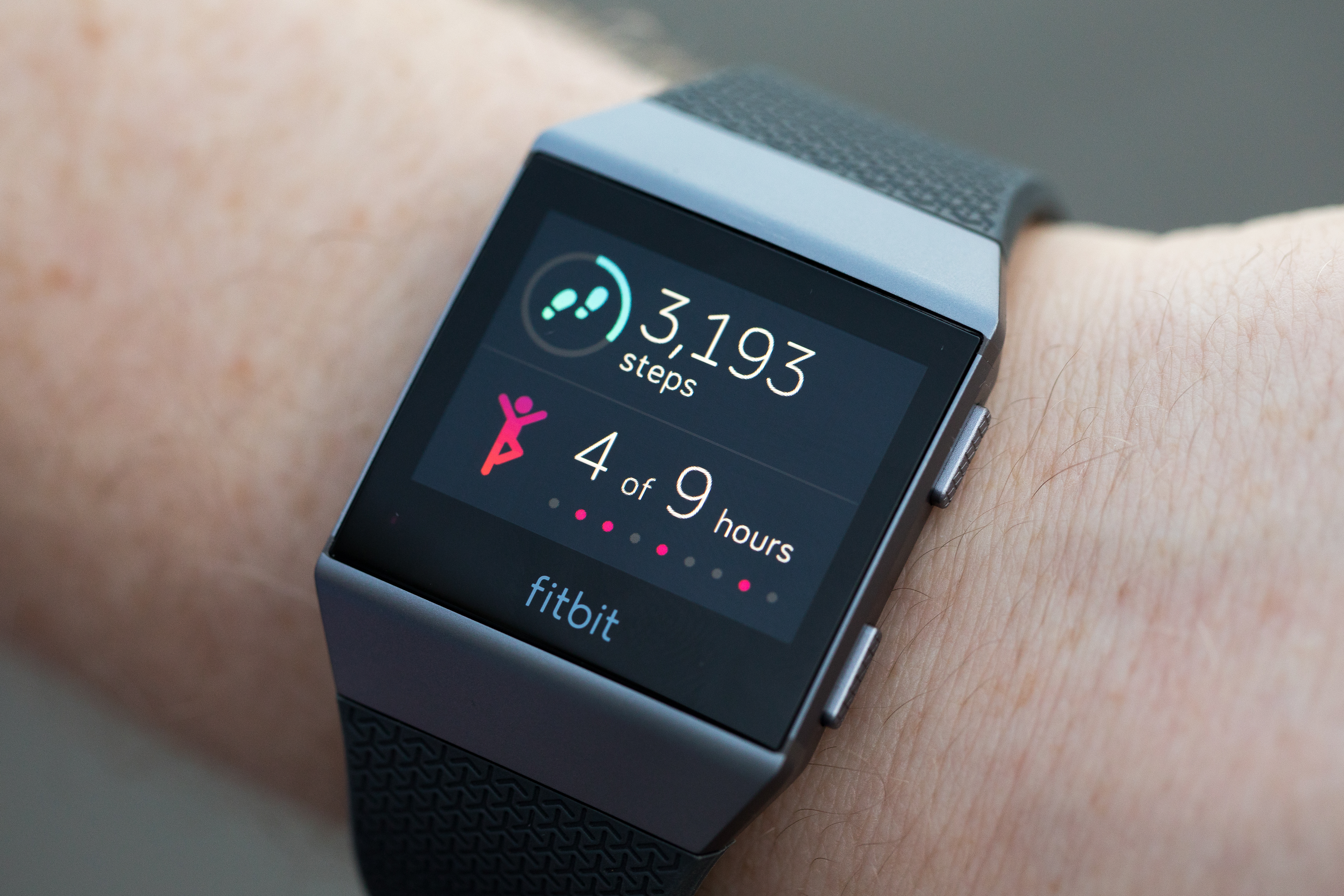 That fact alone makes Fitbit well-positioned to challenge the competition for a spot atop the smartwatch heap. But where other companies have positioned their own products as a smartwatch first, the Ionic feels more like a fitness band that has mutated into something more. That goes for both the product design, software layout and even the product marketing, which positions the device as an activity tracker for people who want a little something extra. It’s a strategy that appears to have worked for the Blaze, so the company is really just doubling down here.

Fitbit’s made that transition easy by integrating the watch with the same app the company uses across its line. That means you’ll be able to transfer the information you’ve been logging all these years if you opt to upgrade. It also means a robust potential data set from the basics of movement and sleep tracking to weight management and diet and even water intake. Fitbit’s earned its spot as one of the most trusted names in fitness wearables, making a pretty strong argument for the Ionic’s place as a top choice for truly active people who want more functionality from their wearable. 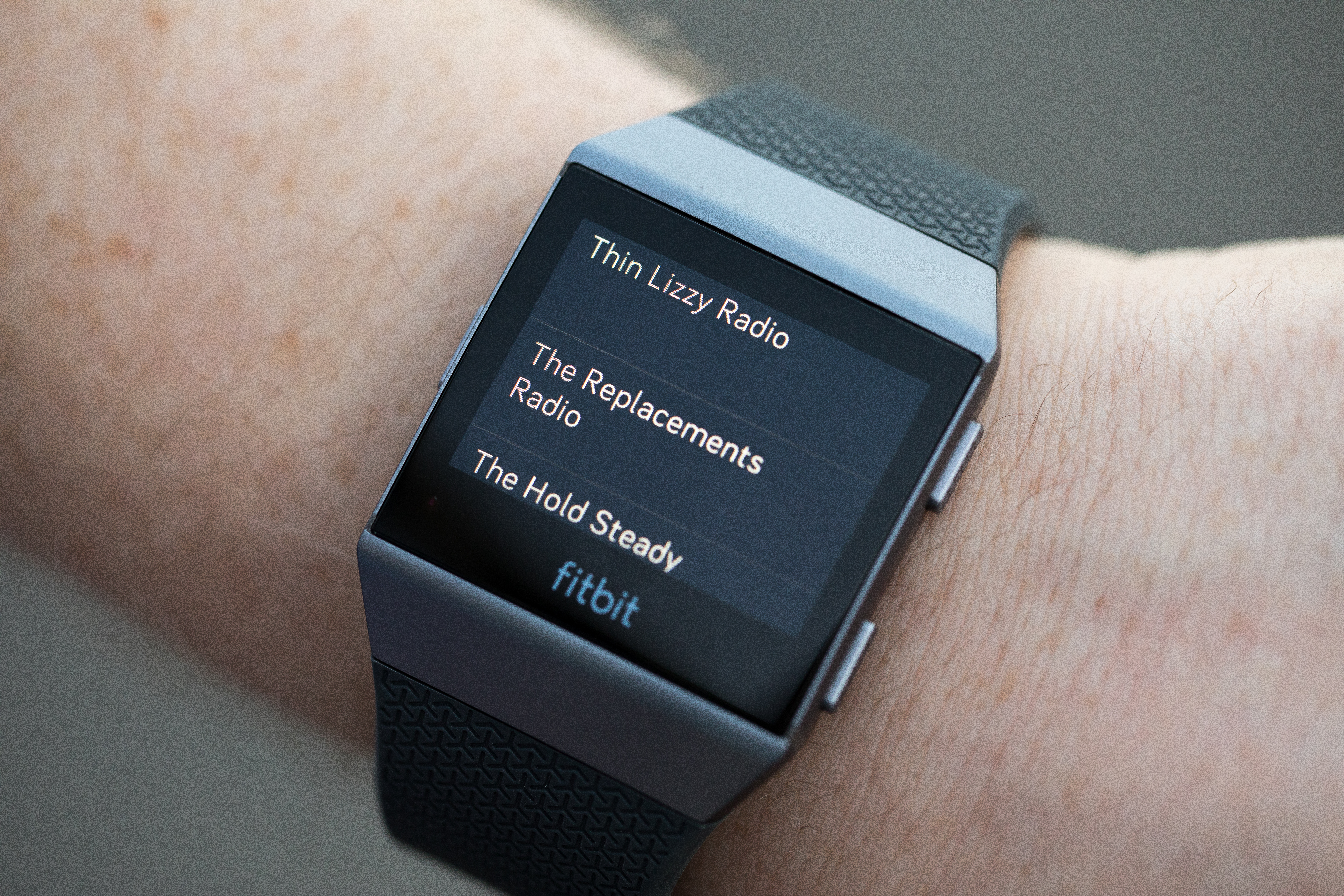 But Fitbit hasn’t cracked the code for making a truly utilitarian smartwatch for the general public. The Ionic takes a broad swipe at smartwatch populism with the addition of an app store — the primary reason behind the company’s purchase of Pebble. But as a countless device makers can tell you, that’s going to be an uphill battle. The device is launching will a handful of solid partners, including Starbucks, Strava and Pandora, but the product is going to have to build up moment fast among developers if its going to succeed with its own store.

It’s a bit of a chicken and egg-style quandary. Many developers won’t be interested until the Ionic really starts selling, and buyers may hold off until some necessary apps like Spotify are on-board. A successful store isn’t make or break for Ionic, but it’s one of the key opportunities the company has to reach a broader audience. Fitness functionality, while solid, isn’t enough to help Fitbit succeed where millions of others have failed.

Instead, the Ionic feels like an admirable but imperfect first step into smartwatches. At $300, it should be more — especially if the company’s fortunes are as inexorably tied to the watch’s success as we’ve been led to believe.