For comparison, Instagram Stories took just two months to get to 100 million users, while WhatsApp Status reached 175 million users in merely 10 weeks. Both of those now have 250 million daily users each while competitor Snapchat has 173 million dailies for its whole app.

Meanwhile, Facebook Messenger as a whole continues its ascent, entrenching itself as the top cross-OS messaging app in the West. Messenger now has 1.3 billion monthly users, up from 1.2 billion in April and 1 billion in July 2016. That’s the same count as Facebook’s other chat product, WhatsApp. 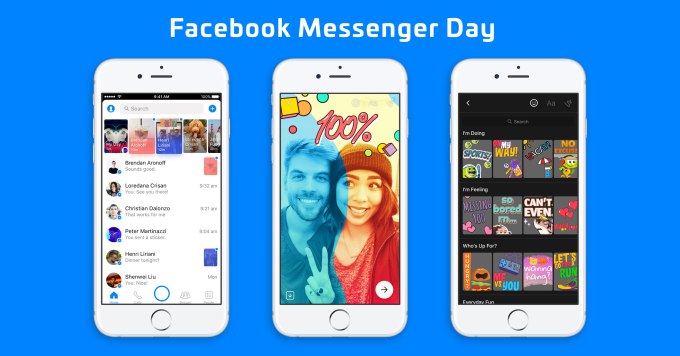 Messenger’s growth rate has slowed slightly over the years. It took just six months to go from 800 million to 1 billion, and nine more months to get 1.2 billion, and five months to add the last 100 million. That could signal that Messenger is beginning to hit saturation in some core markets.

Messenger’s closest competitors that aren’t owned by Facebook include China’s WeChat with 938 million monthly users as of May, China’s QQ with 861 million monthly users as of Q1 2017 and Snapchat with 173 million daily users as of Q2 2017 (though not all use it for messaging). Apple’s iMessage has also reasserted itself, transforming from a lackluster SMS replacement to dynamic experiences, including animations, an app platform and, in the upcoming iOS 11, Animoji you can control with your face using augmented reality. 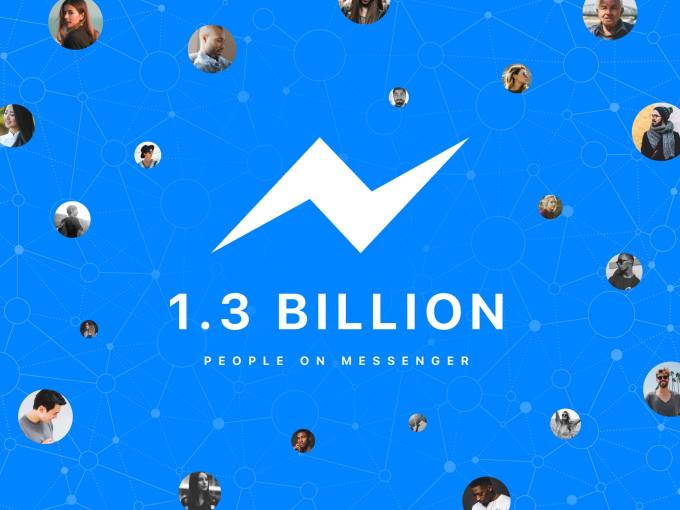 Messenger has had a bit of a rocky year in terms of design. It rolled out an aggressive redesign that made the whole inbox just a layer on top of the Messenger Camera, with awkward round edges atop the rectangular screen. It later rolled back some of that styling, and moved to a tabbed inbox in May.

The app’s Snapchat Stories clone Messenger Day launched in March to heavy criticism, with some saying the broadcast social media feature doesn’t fit in the chat utility and stole screen space from the message threads. Growth has been much slower than for its other Snapchat copies. Some Facebook lovers may have shifted usage to Instagram’s messaging feature Direct. It’s swelled to 375 million monthly users, and now offers both permanent and ephemeral messaging.

Meanwhile, Facebook has struggled to make Messenger bots the ubiquitous utility it was hoping for. After a sloppy launch in 2016, Messenger has augmented bots with group chat capabilities, begun suggesting them through its AI assistant M and built a bot discovery section into Messenger. Still, they haven’t driven much buzz. And Facebook hasn’t added any new voice features to Messenger despite that rabid adoration for products like Amazon Alexa and Google Home. On the plus side, Messenger’s video chat has proven popular. The feature hit 245 million monthly users as of December when Messenger added six-way split-screen group video chat reminiscent of teen app Houseparty. Now Messenger is doubling down with integration into Facebook’s full-fledged Houseparty clone called Bonfire that was just spotted in the wild yesterday. Rather than force Bonfire to grow from scratch, Messenger’s 1.3 billion users can instantly jump into the group video chats without downloading a separate app.

Messenger has finally started to ratchet up monetization. Brands can pay to send Sponsored Messages to people who’ve already chatted with them, or buy display ads within the inbox, which rolled out in July. 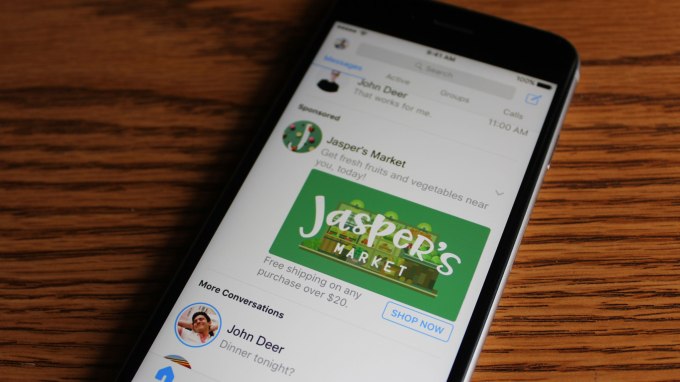 If Messenger wants to keep growing, it must continue to copy the best features of its competitors while innovating where it has natural advantages through its ties to Facebook. One opportunity could be the video chat hardware device Facebook is reportedly building, codenamed Aloha. With a 13-inch to 15-inch, it could help people video chat with grandparents or other family that aren’t as familiar with smartphone apps. Facebook could parlay the device into an attack on home phones that could hold serious growth opportunities.

Still, while chat may be the center of the mobile experience, and all of mobile is adapting to the visual communication era, Messenger can’t let the bells and whistles obstruct the speedy utility at its core.