Facebook today is announcing a new feature called Crisis Response, designed to make it easier for people to find out more about recent crises and access various to tools to support recovery, including Safety Check, Community Help and Fundraisers. This trio of tools had previously existed – the difference is that all the resources will now be located in a single place.

The social network has been steadily upgrading its capabilities to connect people in the wake of a crisis or natural disaster.

In February, it introduced Community Help, which allows locals to find and offer assistance to victims of a disaster, including things like water, food, baby supplies, or even shelter. The feature was integrated into Facebook’s Safety Check, the tool that lets you mark yourself as safe after a disaster, or check on the status of friends and family.

This June, Safety Check was expanded again, to include the ability to fundraise for disaster victims.

More recently, Safety Check appeared as its own option within Facebook’s main navigation.

Now, Facebook is centralizing not only Safety Check, but also other tools in the new Crisis Response hub.

In addition to Safety Check, Community Help, and Fundraisers, the new destination will include more crisis-related content, too, like links to articles, photos, and videos from public posts that can help people learn more about the crisis. This information along with Safety Check activations may also appear in the News Feed, at times.

By offering more information about what occurred, combined with imagery and video, people may be more inspired to help, is the belief here.

The introduction of the new hub comes at a time when people have turned to social media in large numbers after not being able to get help quickly through traditional channels, like 911, in the wake of a crisis.

The 911 system is limited by the number of phone lines, dispatchers, and resources that can be deployed – and it quickly became overwhelmed by the scale of the disaster at hand, in the case of Harvey’s flood victims.

The usage of social media then skyrocketed as a result, with people turning to the larger crowd in desperation for assistance. Some people began posting their cries for help to Twitter; others used the walkie-talkie app Zello; and neighbors signed up in droves for Nextdoor.

Facebook, too, says it has seen its users coming together to help one another in the wake of Hurricanes Harvey and Irma. For example, a man drove 90 minutes on his boat after seeing a call on Facebook asking for people who could help rescue those trapped in their homes. A daughter of an Irma survivor on St. John fundraised over $2,000 to help her mom recover. People have found loved ones were safe through Safety Check, organized help over Messenger, or found shelter through Community Help. 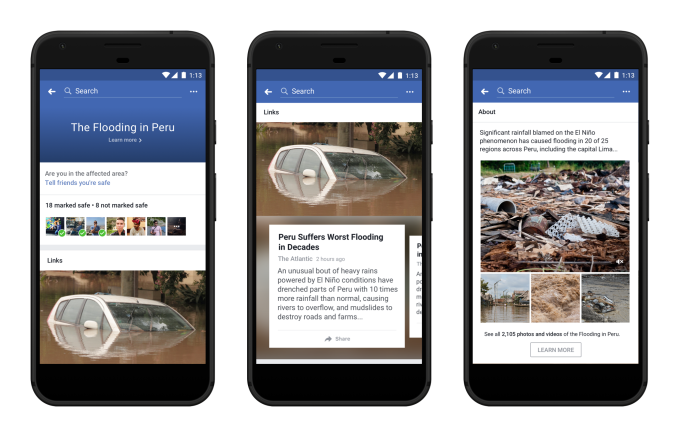 But Facebook wasn’t the only tool that helped people after Harvey – Twitter was more efficient, at times, as well as Zello. With the new hub, Facebook aims to solidify its position as a place where users can connect for help.

The Crisis Response hub will appear in the weeks ahead on the Facebook desktop homepage, and in the Facebook menu in the mobile app, the company says.