The new iPhone 8 camera packs a new chip called the A11 Bionic, which is loaded with an upgraded amount of power with a 6-core chip — but that’s probably not the most important part of the company’s announcement.

Apple is including a custom-designed GPU in the iPhone 8. GPUs excel at machine learning thanks to their ability to spread out the kinds of rapid calculations across an array of cores that are required for machine learning, like natural language processing and image recognition. They’re great for games, sure, but this is a big step for Apple as it looks to lock people into its ecosystem with Siri across an array of devices.

This was a move that was probably a long time coming. There were murmurs in April of Apple designing its own GPU for the iPhone. Apple is not alone in looking into building custom hardware and GPUs for its machine learning efforts, optimizing its hardware for its needs. For Apple, that means building tools that are optimized for Siri as well as for its cameras and other potential machine learning tools.

This is also going to be a big deal for Apple’s efforts in augmented reality. Apple is looking to woo developers with tools for developing augmented reality, and including the actual oomph in the phone to support a high-quality consumer experience will help attract even more developers.

Here’s the rest of the guts of the A11 Bionic chip, the next-generation chip for the iPhone 8: 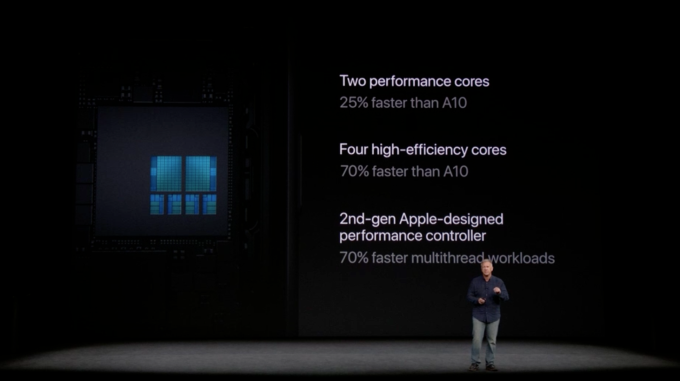 Apple usually upgrades its processors to make them faster and more efficient as the demands of smartphones grow over time with new apps and processes. But Apple coming out with its own custom GPU is a Very Big Deal because this is an area that Nvidia has had almost full ownership for a long time. This is going to be important for developers going forward.

Be sure to check out the rest of our coverage of the iPhone event over on our live blog.