Goodbye fingers, hello faces. With the introduction of Face ID, and the removal of the Touch ID button, Apple today confirmed speculation about its next generation of on-device authentication when it comes to paying for things: You will now be able to buy goods using your new iPhone X, authenticating your identity with facial recognition.

Apple detailed the new iPhone X on stage today at the Apple press conference, including one of its standout features, Face ID. Essentially the replacement for Apple’s touch-to-authenticate system, Touch ID, Face ID will unlock your iPhone and get you into your protected apps – like your financial apps, such as a bank’s app or Mint, for example – just by looking at your iPhone. 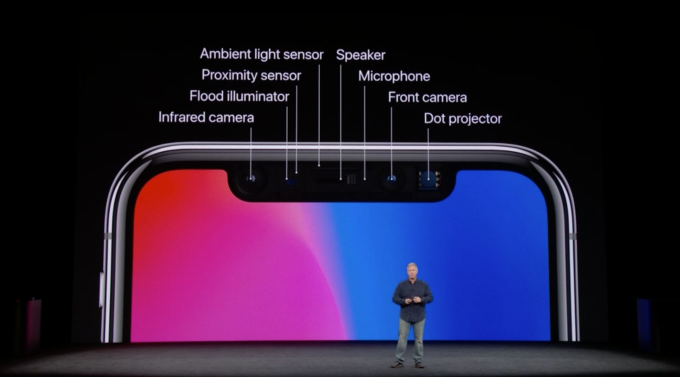 Face ID works by way of a variety of sensors. The iPhone X’s “True Depth” camera system includes an infrared camera, flood illuminator, dot projector and more all at the top of the iPhone.

The sensors, combined with neural networks and machine learning techniques, help to make a mathematical model of your face. This serves as your unique authentication mechanism to unlock your device. (Unless you have an evil twin, is today’s joke). The system will work in the dark by illuminating your face, and it will adapt to your changing face over time – meaning, you can grow a beard and it won’t get confused.

Apple also said that wearing a hat, glasses or new hairstyle will not fool Face ID, nor can it be spoofed by a photograph.

In addition, Phil Schiller noted that the team even worked with Hollywood mask makers to prevent Face ID from being fooled by fakes. Of course, until the iPhone X is in security researchers’ hands for testing purposes, we won’t know the true extent of its hardened nature. But it is worth pointing out that Face ID’s system works locally on the device and stores data in a secure enclave – it’s not sending data to the server. 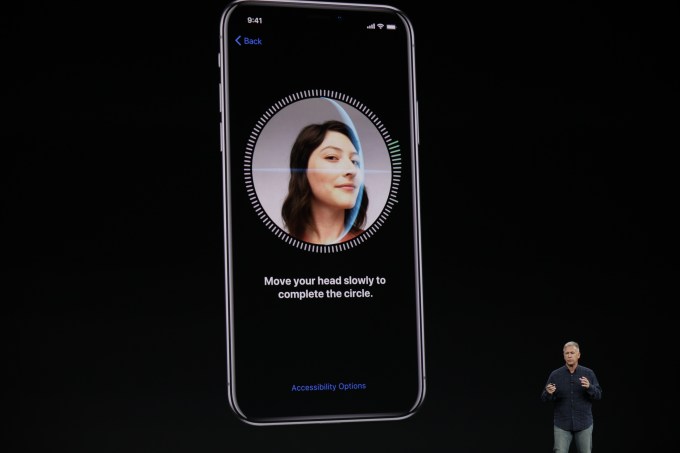 One of the more notable advantages to this facial recognition system – I mean, beyond support for animoji’s, of course –  is that it will also work with Apple Pay.

That means you’ll be able to look at your phone in order to make a payment at a supported terminal. This won’t require retailers to upgrade their terminals, to be clear, if they support Apple Pay (NFC payments) it will work. The difference is in how you kick off the payment process itself – instead of a touch, it’s a look.

To use this feature, there are just a few steps: you double-tap the button on the side of the iPhone, look at the iPhone X so it recognizes you, then hold the device near the payment terminal to complete the transaction.

Because Face ID takes advantage of the iPhone X’s advanced camera system, it will arrive on iPhone X only. While a dumbed-down facial recognition system could work on the lesser iPhones for fun things like the animated emojis (animojis), Apple is holding back Face ID to drive demand for the iPhone X.

Pre-orders start October 27 for the iPhone X, and will begin shipping November 3. It’s a whopping $999 to start.