Subverting the 140 character limit by chaining tweets together into a cohesive “tweetstorm” takes some know-how, or you’ll screw it up. Luckily Twitter has built but not yet launched a feature for easily composing tweetstorms. Hidden inside the current Android app is a way to write out a tweetstorm and see it broken into distinct tweets, then tweet them all at once.

By institutionalizing tweetstorms with a graphic user interface, Twitter could make sharing expanded thoughts more accessible to everyone. Whether it’s telling a suspenseful story, stringing together breaking news facts, or going on a long-winded rant that should have been a blog post, tweetstorms let you distribute deeper and more nuanced content.

Under the pseudonym Devesh Logendran, a Twitter user passed on their sighting of the tweetstorm feature to TNW’s Director of social media Matt Navarra. Twitter told us “No comment to share on the record” when we asked about the feature that refers to tweetstorms as “threads”. We have no additional information on if or when this feature will ever launch, but have learned that it’s not currently available for public testing.

Popularized by tech investor Marc Andreessen, coined by fellow VC Chris Dixon, and vilified by BuzzFeed’s Charlie Warzel, tweetstorms have been a Twitter power user trick since at least 2014.

Typically, you need to know to reply to you previous tweet one at a time to build a tweetstorm, not just tweet separately or reply the first tweet. A lot of people make these mistakes, causing their storms to get broken up in the timeline.

Whether making tweetstorms easier is good for the information density and consumption trends of Twitter is up for debate.

Some think you should either condense your thoughts into a tweet or two, or right a separate blog post and link to it. Others think the serialized format can offer a special reading experience and reach a wider audience than an offsite blog. Either way, the Twitter sorting algorithm deemphasizes content with weak feedback, so if tweetstormers are boring their audience, they’ll pay the price in visibility. 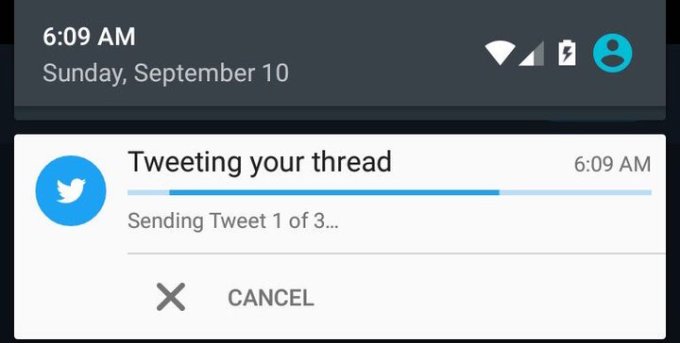 But one of Twitter’s core problems is that it doesn’t feel approachable for the average joes and janes, leading to its weak user growth the last few years. Seeing tweetstorms and not understanding how they work, or messing up when you try yourself can discourage people from sticking with the app.

Twitter’s already made a wise push to simplify itself in other ways, like dropping media embeds or usernames in replies from the character count. Launching a tweetstorm button could remove one more confusing block from the wall dividing Twitter from the mainstream.