Startup funding and exiting activity has been slow over the past few months in the U.S. Fewer companies closed rounds, IPO volumes were light, and not a lot of big M&A deals got done. But that’s to be expected, right? After all, it was summer break. Now that Labor Day’s over and we’re back at our desks, we can expect deal volumes to pick up.

That seasonal explanation for a sluggish venture investment climate seems comforting on the heels of a muggy July and August that were conspicuously bereft of big exits. And it certainly seems like September is off to a more action-packed start, with new IPO filings and big funding rounds.

But is fundraising and exiting seasonal? To attempt an answer, we dug into Crunchbase data to see if this summer was indeed an unusually slow period. Then we looked at whether an autumnal rise in activity is typical. We looked at three areas: startup fundraising, acquisitions, and IPOs, comparing 2017 to the prior four years.

Here is how it breaks down.

Recent years’ data indicated that there’s no notable summer slowdown for startup fundraising. In fact, for the past five years, summer has actually been pretty average in terms of deal count across all stages from seed through late-stage.

You can see that in the chart below, which shows the total number of seed and venture funding announcements for North American startups each month over the past five years: 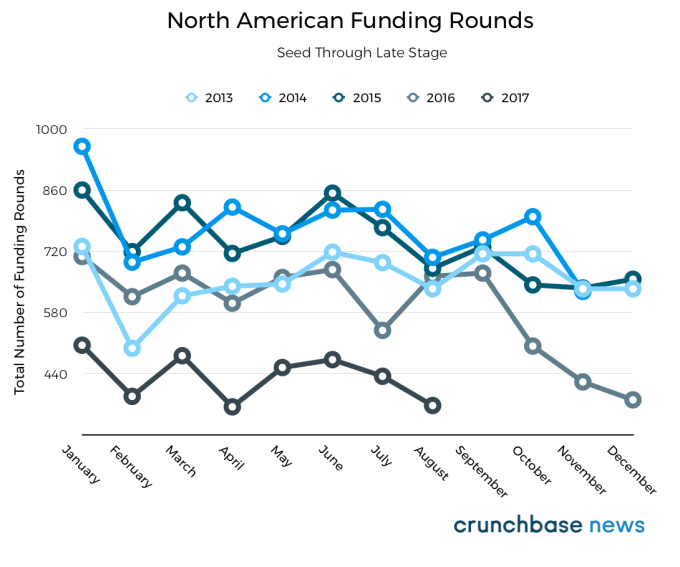 For this year, at initial glance, it does look like round counts took a dive this summer. There was a monthly average of 400 funding deals announced in July and August, about 10% lower than the to-date 2017 monthly average. However, that’s more likely because of a lag time in reporting than a steep month-over-month decline. Typically, about half of seed-stage deals get reported after quarter’s end.

That’s not to say funding wasn’t slow compared to prior years. Round counts are down overall, led by a slide in seed-stage financings. It was a slow summer compared to last year even correcting for the lag. But it was also a slow spring.

Since reporting of Series A and later stage rounds is less likely to show a lag, we also put together a dataset that excludes seed and angel deals. Here, it also appears the summer months are about average in terms of round count. More often, it’s November and December that are slower-than-average, while January is typically quite busy. September, as one might expect, is also usually above average for funding activity. 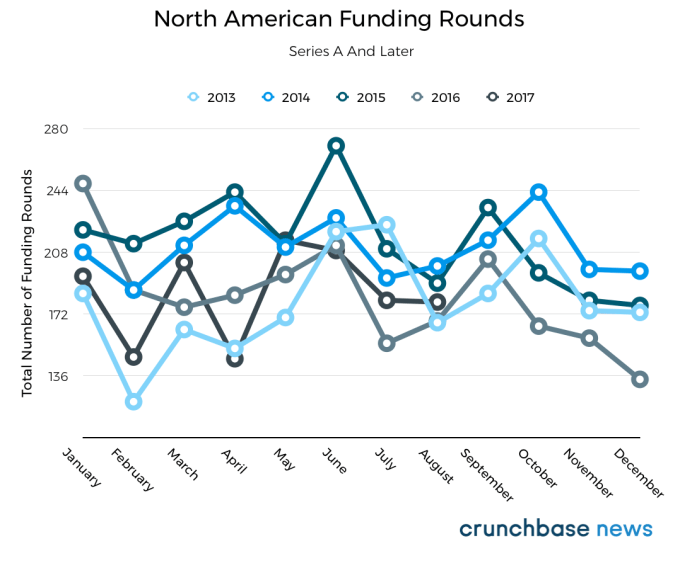 It turns out venture-backed M&A deals get announced at roughly the same pace in summer as any other time of year.

Looking at M&A volumes over the past five years, we did not see a notable trend of either seasonal slowing or acceleration. For this year, there were 36 acquisitions announced in July and 48 in August for private companies in North America that had raised VC or seed funding in the prior three years. That’s on par with the average pace for 2017, which is 46 deals per month.

However, there weren’t a lot of big-ticket deals in the mix. Cisco’s $320 million acquisition of datacenter technology provider Springpath was actually the biggest disclosed-value purchase of the summer.

However, that’s also not unique to summer. Overall, 2017 has been slow for M&A. So far this year, we’ve seen just one big unicorn M&A deal: Cisco’s $3.7 billion purchase of AppDynamics in January. Two other one-time unicorns were acquired this year: data management technology provider Simplivity and Middle Eastern online retailer Souq.com. Both sold for well below their peak private valuations.

The number of tech IPOs has been on the light side this year, with only about a dozen offerings from venture-backed companies. Summer was particularly slow. Meal kit company Blue Apron and storage technology provider Tintri both debuted in late June, and both posted disappointing performance. The only VC-backed tech-ish company to go public in July or August was online brokerage Redfin, which has performed well.

It’s too early to tell whether there will be a fall pickup in new offerings, beyond a filing on deck from Roku. Typically, we do see more offerings after summer, however, and given the big pipeline of heavily-funded pre-IPO companies, there’s no reason to think 2017 should be an exception.

The fairly average pace of fundings and acquisitions during summer should not be taken as an indication that startups and investors don’t take vacations. Although it’s true working long hours with few breaks is a popular practice in Silicon Valley, it’s also true that most funding rounds and acquisitions take a while to close. So while a deal might be announced in summer, it’s likely that most of the work that went into it occurred earlier.