Zelle, the PayPal rival backed by more than 30 U.S. banks, is preparing to launch its standalone mobile app on Tuesday, September 12th. The move is meant to give the U.S. banking industry a foothold in the person-to-person payments business, where they’re losing ground to services like PayPal, Venmo, Square Cash and, very soon, Apple’s iMessage, powered by Apple Pay.

While banks have always offered the ability to do instant transfers, the process to date has been more cumbersome. Users would need to have details like a friend’s account number and routing information, for example. That led to the birth of alternative means of sending money, like today’s payment apps where you only need to know information like a username, phone number or email.

Similarly, Zelle’s new app will allow users to send and request money to and from their contacts, using only their phone number or email. It also will work with U.S. Visa and MasterCard bank debit cards, even if the user’s bank is not yet participating in Zelle’s payment network.

That network has been in the works since 2011, when Bank of America, Wells Fargo and JPMorgan Chase first teamed up to work on a digital payments solution that would allow their customers to send money to each other through a joint venture then called clearXchange. The consortium dragged its feet, but last year picked up momentum and rebranded to the consumer-friendly “Zelle.”

This June, Zelle announced it would become available within the mobile banking apps of participating financial institutions. So far, 13 banks and credit unions added support for Zelle in their own mobile apps, and 17 more have plans to connect with Zelle, according to Early Warning Services, the big bank-led consortium that operates Zelle’s network.

Since that rollout, Zelle says the supported banks and credit unions have seen up to 300 percent increases in new customer enrollments, and an average of more than 50,000 new customers are now enrolling with Zelle daily. The larger plan is to bring Zelle to the 86 million mobile banking consumers in the U.S.

In the new app available on Monday, Zelle users will be able to send instant funds to one another for free, provided both are signed up for Zelle.

If the recipient doesn’t have access to Zelle through their bank or credit union, however, transactions will take between 1 and 3 days to complete. But unlike PayPal and Venmo, the transfers hit the other person’s bank account more immediately — there’s no final “transfer to bank” step the recipient has to take to have access to the funds. 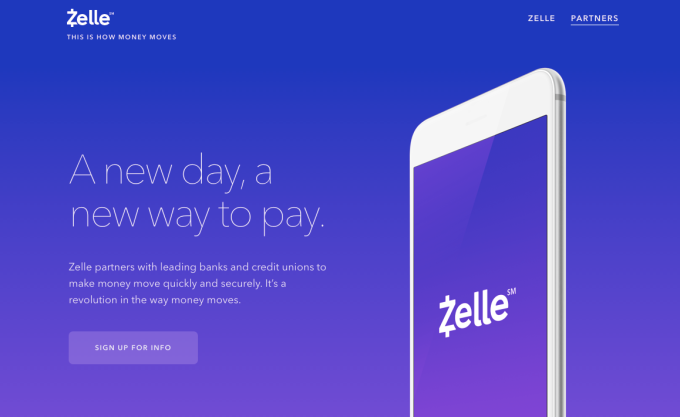 The Zelle network already has a sizable user base making instant payments. In the first half of this year, the banks connected through Early Warning handled 100 million instant payments, totaling $33.6 billion — largely before Zelle became available.

However, Venmo processed $17.6 billion in mobile payments last year, and is increasing that number. In Q2, Venmo saw $8 billion in transactions, or twice as much as the same time last year. And for the first half of the year, Venmo totaled $14.8 billion in payments.

PayPal, which also owns Venmo, has been working to counter the Zelle threat. It announced in June that it’s also bringing instant bank transfers to PayPal and Venmo, but will charge a flat $0.25 fee for the option. So far, only PayPal has gone live with the new feature.

Correction: app launches on Tuesday, not Monday. apologies for the error.