Hulu and Spotify announced a partnership today that will see the two companies working together to market entertainment bundles offering both services which will be jointly sold through a single subscription plan. Initially, this bundle will be targeted towards U.S. college students and will cost just $4.99 per month – the same as Spotify’s existing student plan. The bundle includes access to Spotify Premium, the company’s on-demand music service, and Hulu’s “Limited Commercials” plan.

The companies say they’ll offer other bundles in the future to target the broader market, but didn’t announce details at this time regarding those plans.

Subscribers who opt to buy the bundle instead of the services individually will continue to use the brands’ existing apps – that is, this isn’t a technology integration where you’d see Hulu shows appearing in Spotify’s app, for example. 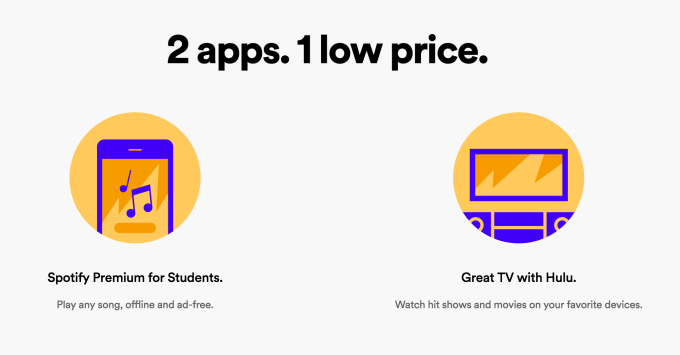 This is the first time Spotify has partnered with a streaming TV and movie service like this, and it arrives when the company has been rethinking its own, existing video offerings. Last week, news emerged that Spotify’s head of video and podcasts, Tom Calderone, was departing the company amid a shift in content strategy.

Spotify had been expanding into other categories like original video, but confirmed following news of Calderone’s exit that its approach would change. Going forward, Spotify said it would focus on expanding video offerings on Spotify playlists, like Rap Caviar, Rock This and others.

As Bloomberg had also noted then, Spotify had once tried to lineup a selection of TV channels on its own for a live video service in Europe, before the arrival of YouTube TV, Hulu, Vue, and others. But it failed to make the necessary deals, so abandoned those plans.

In other words, Spotify knows the challenge it would face if it tried to build a service like Hulu’s from scratch to expand its video selection for subscribers. It clearly felt it would do better to partner with an existing service, like Hulu, to make its subscription more appealing. 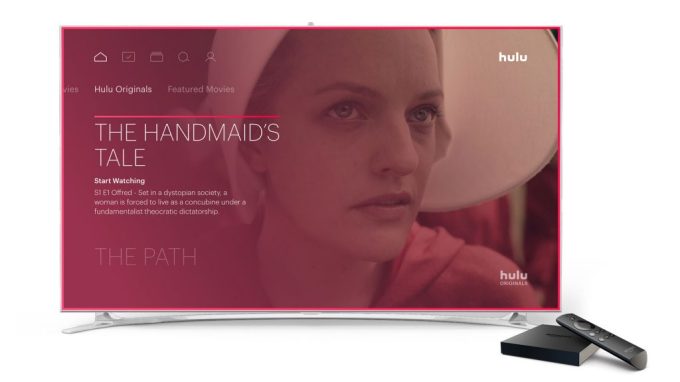 This move is also significant in terms of Spotify’s battle with Apple Music.

Spotify has more than 60 million paying subscribers, making it roughly twice as big as Apple Music, which had 27 subscribers as of June. Until now, neither service had a compelling video offering to accompany their streaming tunes. Some of Spotify’s originals were downright boring, in fact. Meanwhile, Apple has been inching into this space slowly, but its shows, like “Carpool Karaoke: The Series” or “Planet of the Apps,” are not must-see content like you’d find on Netflix or HBO and definitely not a reason that people would subscribe.

However, Hulu not only provides movies and TV shows from major networks and studios, it now has its own Emmy-nominated series, “The Handmaid’s Tale,” from its investments in original content. That makes its content far more appealing than anything Spotify can produce itself.

“In bringing Spotify and Hulu together, we’re now able to offer students – both the millions already on Spotify Premium, and those who are new to Spotify – access to the world’s best music, TV and movie content in the simplest possible way,” said Alex Norstrom, Chief Premium Business Officer at Spotify, in a statement. “We’re very excited to be partnering with Hulu – a like-minded company which is as focused as we are on delivering the very best in high quality streaming content,” Norstrom added. 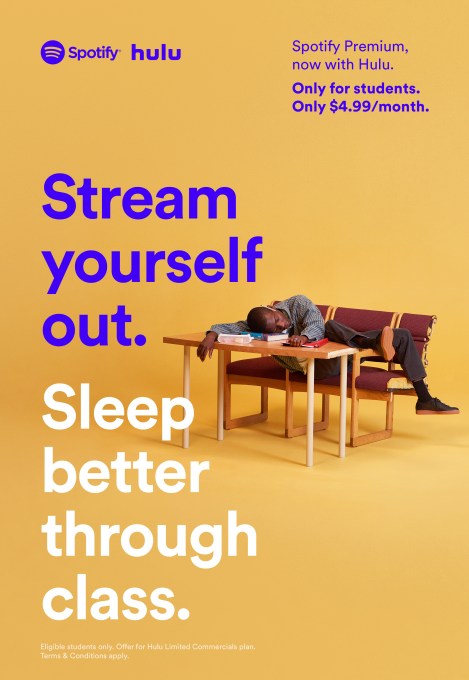 Above: Spotify’s marketing materials for the new bundle

Given the new bundle price is the same as Spotify’s prior student pricing (and Apple Music’s for that matter, as well as Amazon’s Music Unlimited service, recently) it doesn’t seem that either company will be making much money on the new joint offering at this point.

We do understand there’s a revenue sharing agreement in place, but clearly those margins are slim.

Instead, it seems that the bundle is a way to eventually funnel higher-paying users back into their services, after the students exit college.

In Spotify’s case, though, it’s automatically switching student subscribers who graduate over to regular Spotify Premium at $9.99/month.

For Hulu, the idea is that students would choose to sign up directly, having made it a habit and part of their TV watching experience for several years.

At launch, undergraduate students enrolled in a U.S. Title IV accredited college or university, who are already a Spotify Premium for Student subscriber, can access their Spotify accounts in order to switch their plan to “Spotify Premium for Students, now with Hulu,” as the bundle is called. Spotify will handle the marketing, including advertising the service through billboards and digital campaigns, and will sell the bundle though its own website at spotify.com/us/student.

Correction: Spotify tells TechCrunch its website for the new plan had a mistake. When students no longer qualify for student pricing, they’re switched the regular $9.99/mo plan, not a $4.99/mo plan, as the website originally stated. Spotify has updated its website as a result of our questioning this detail. We’ve now updated our post to correct this as well.