Chatbots may have underwhelmed thus far, but the impact of the technology still has bags of potential in international markets where mobile messaging has been mainstream for years.

That’s the view of one startup that’s working to bring the benefit of bots to the mainstream in Indonesia, the world’s fourth most populous country and the largest economy in the growing region of Southeast Asia.

Indonesia has been recognized as a global hotspot for social networks like Facebook, Twitter and Instagram in recent years, and messaging app adoption has been equally as strong with Line, Kakao, BlackBerry BBM and WhatsApp among the top choices for the country’s 260 million population.

Kata.ai, a Jakarta-based startup that recently raised $3 million, said it sees huge potential for many industries and segments to tap into the culture of chat to advance their business and customer relations. It operates a platform that lets brands and companies to operate chatbots using the native Bahasa Indonesian language, and not English which is not widely spoken with fluency.

“We are helping brands to provide better engagement, sell stuff and open new revenue generation channels,” Irzan Raditya, CEO of parent company YesBoss Group. “Chat already has a foothold in Indonesia, but now we want to demystify AI and open up other technologies to underserved markets.”

Right now, Kata.ai operates on a number of chat platforms, which include Facebook Messenger, Line, Telegram, Slack and BBM (which is still big in Indonesia), as well as Twitter and Skype.

WhatsApp, the world’s most popular messaging app, is a conspicuous absentee because the company has not yet opened its platform. However, that could change soon with this week’s announcement of plans to integrate business services into the app soon.

YesBoss Group began as a personal assistant service, but it pivoted into chatbots when Raditya noticed that the only solutions were global — and therefore in English — which could only ever have limited impact in markets like Indonesia. He then went ahead and started the first local platform for bots. 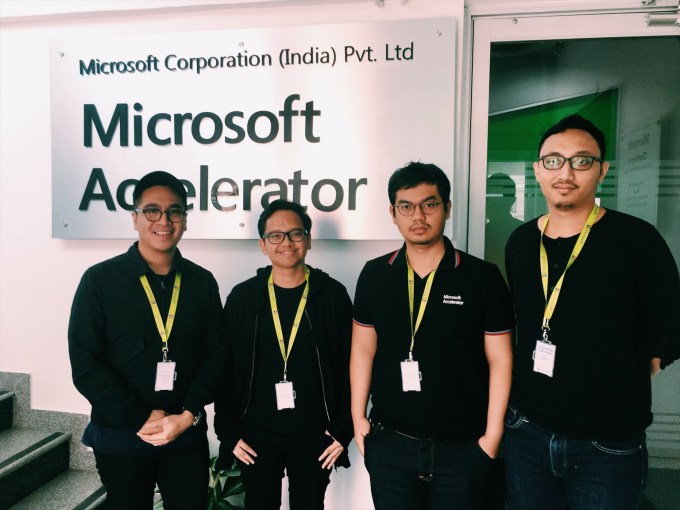 Raditya and his team graduated Microsoft’s accelerator program in India

Mobile operator Telkomsel is one of the startup’s most visible clients today, using its platform to power its own-name chat bot that lets customers top-up their balance, change packages and check other information. The company plans to use this new funding — led by Taiwan’s Trans-Pacific Technology Fund — to push business-wise by creating its own in-house sales team. The core tech itself needs development and so a significant portion of the round will go towards hiring the AI and big data talent required.

That’s a tough ask in Indonesia where, despite a large population, there’s a lack of tech talent and particularly individuals with experience in AI and chatbot-related fields. For now, though, Raditya isn’t thinking of opening overseas offices to suck up talent, instead he’s looking locally and for those willing to move (or return) to Indonesia.

Likewise, there’s no immediate expansion plan, but he did suggest that the Kata.ai service will launch in new markets in Southeast Asia at some point next year. But with Indonesia forecast to account for half of the region’s fast-growing internet economy, the startup is at least starting out at ground zero.