To build the game, which was first announced last year, the company partnered with Walking Dead creator Robert Kirkman’s Skybound Entertainment. That means the game is technically an adaptation of the comics, but the environments and challenges should feel pretty familiar to TV fans, too.

Not that this is the first mobile game to adapt the ubiquitous zombie franchise — Telltale has released multiple, critically acclaimed Walking Dead adventure titles, while Scopely’s got The Walking Dead: Road to Survival.

Still, I was quite impressed by what Disruptor Beam CEO Jon Radoff demonstrated for me. March to War takes place in the same zombie-overrun United States as the comics — in this case, Washington, D.C.

The team created what Radoff said is a 20-square-mile map of the city. In other words, it’s a big map, but it also has lots of detail, allowing you to recognize landmarks like the White House, and even to spot individual walkers (a.k.a. zombies) moving across the landscape. 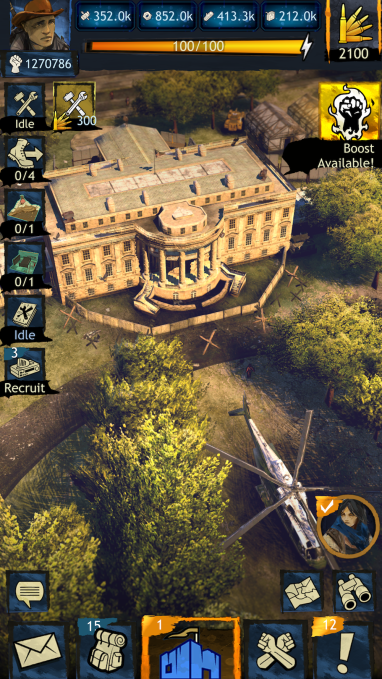 You can also interact with characters from the comics like Rick and Negan by adding them to your council, where they’ll advise you on your next move.

And as in the comics, the walkers provide a threat, but the bigger danger comes from other humans. March to War is a multiplayer experience that allows you to form alliances with other players (you’ll have a pretty tough time trying to survive on your own, Radoff said), and then launch raids and attacks on other communities.

The Walking Dead: March to War is available for free on iOS and Android. Radoff said the launch reflects the same philosophy that Disruptor Beam used with Game of Thrones Ascent and Star Trek Timelines — the goal is to win over the most passionate fans of the franchise, and then expand outward from there.

Radoff said this is also happening as the owners of popular entertainment franchises increasingly see games as a way to stay connected to fans, not just to make a quick buck.

“Nothing engages an audience like a long-running game,” he said. “What we build are MMOs that are fundamentally designed to engage people for many, many years.”