NBC News’ first-ever daily show for Snapchat is seeing promising numbers after its first month on the air. In a release sent to reporters this morning, NBCU claims the show has grown its audience to over 29 million unique viewers. That’s roughly triple the number of viewers who tune into the top-rated “NBC Nightly News with Lester Holt” program, by the way. But that’s not necessarily a fair comparison, given that Snapchat counts a view as soon as a video opens.

That being said, watching news via a smartphone is a different way of consuming information, so it’s not really right to compare Snapchat news to TV in the first place, or say it’s “bigger.” On mobile, users want sped-up soundbites, where information is distilled down into “need to know” bits — the kind that can be easily parsed while you have a few minutes of downtime.

On that front, NBC’s “Stay Tuned” Snapchat show delivers. In just a few minutes, NBC News’ Gadi Schwartz and Savannah Sellers cover four or five major stories, ranging from national and international news to lighter stories from pop culture, and more. NBC is leveraging its existing investments in digital, while also repackaging news content from its other programs with the new show.

Unlike TV’s nightly news, the Snapchat show has two shots at capturing users’ attention — it airs two episodes per day during the week, and one per day on weekends. That means some viewers may be catching the show’s earlier episode, while others tune in later in the day.

The show, not surprisingly, has attracted a youthful audience. NBCU’s announcement says that over 60 percent of viewers are under the age of 25. But that’s in line with Snapchat’s demographics, of course. 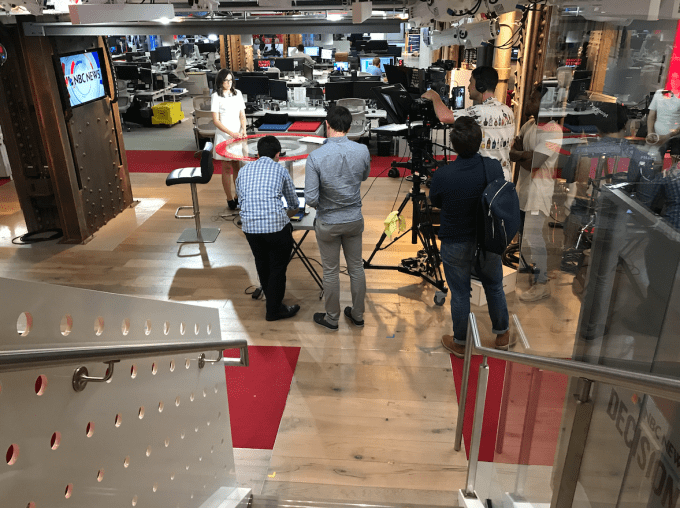 It’s been roughly a month since NBC launched “Stay Tuned” for the Snapchat audience, so it may be too soon to say it’s a success. There’s still a novelty aspect involved here, and NBC will need to prove that it’s able to retain these viewers over time. However, the early retention numbers are fairly high. According to NBCU, over 40 percent of viewers are watching at least three times per week.

That’s not quite in line with how older generations watched their daily news — that was something of a nightly ritual involving “appointment television” and information delivered by trusted anchors. Snapchatters — and the younger generation in general — is less brand-loyal.

Also of interest is how the digital medium allows “Stay Tuned” to quickly evolve and adapt to trends and insights as the show continues. For example, NBC says that it’s already rolling out a new graphics package, new logo and it’s updating the show’s format based on learnings from its first month in. The program now features on-camera guests and on-the-ground reporting from co-hosts, it says.

Whether Snapchat is ultimately the right place for this program long-term is a question that needs further examination. This quick-hit format could work well on other networks, like Twitter or Facebook, for example. There’s also no reason why today’s internet live TV services — like YouTube TV, Sling TV, Vue and others — couldn’t offer “Stay Tuned’s”  news clips as part of their lineup, too.

“Stay Tuned” does have the benefit of being the first-ever daily news program on Snapchat, so it’s helping to pave the way for what comes next.

Other Snapchat shows have pulled in a number of viewers as well. E!’s bi-weekly “The Rundown” averages more than 7 million viewers per episode, while episodes of A+E’s “Second Chance” has reached over 8 million unique viewers, for instance. NBC’s numbers indicate that the social app’s user base is in the market for more than just mere entertainment and typical “teen” content. They’ll actually watch the news. And, well, thank goodness for that.

Correction: Clarified the numbers of other Snap shows are per episode; rather than unique viewers over a month.