Lately, news from the ridesharing industry seems to come in one of two flavors. There’s salacious coverage of the ongoing cultural and leadership woes of the industry’s current (and perhaps temporary) reigning champion, Uber. Meanwhile, every month or so, there’s a story about another nine-figure investment or buyout deal in the sector, led by anyone from incumbents in the ridesharing or automotive sector to Japanese billionaires backed by the likes of Saudi Arabia and Abu Dhabi.

Here, we’re going to specifically focus on investment activity and the structure of its investment network in the ridesharing industry. This serves both to quantify the margin by which Uber currently leads, as well as identify the growing network of alliances by a potential usurper.

Ridesharing is one of the fastest-growing segments in the transportation market. According to data compiled by Statista, the number of users of ridesharing services will cross the half-billion mark in 2020. 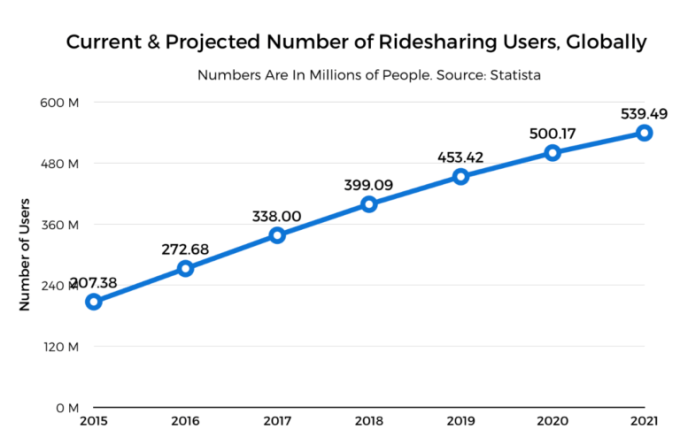 Statista further estimates that by 2020, global revenue of the ridesharing industry will be approximately $61.4 billion (USD) from 12 percent of the adult population in the various regions Statista’s analysis covers. This points to a strong but linear growth trajectory for the industry at a global scale. However, continued growth won’t come cheap.

Sustaining growth in the ridesharing industry — especially given fierce competition in most markets from other ridesharing services, taxi companies and public transit — is a very capital-intensive endeavor.

Using data for more than 260 funding rounds of all types invested into some 70 domestic and international ridesharing companies in Crunchbase’s ridesharing category, we can see in the chart below just how much has been invested over the past couple of years. 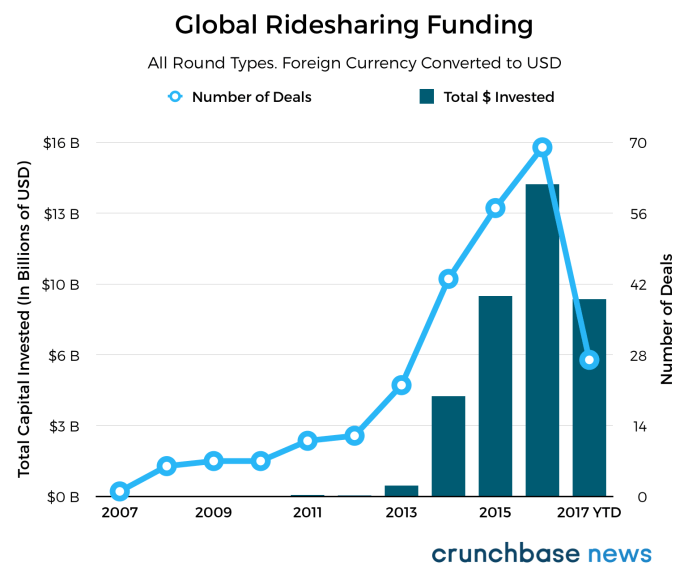 Be advised that for years prior to 2013, there were still deals with known dollar amounts, but those were too small to properly show given the scale of dollar volume from subsequent years.

The scaling problem presented by global ridesharing investment data points to the massive, nearly unparalleled increase in funding into that industry, one that less than a decade ago was little more than a twinkle in entrepreneurs’ eyes.

Just how tangled is the ridesharing market?

In the last 18 months or so, there have been a number of deals that, to an outsider, might make the ridesharing industry look like a jumbled mess of entangled alliances.

For example, Google’s parent company, Alphabet, has an autonomous car subsidiary called Waymo, and Waze, a mapping application owned by Google, began rolling out a carpooling service this year. This is all despite the fact that Google, by way of its venture arm, GV, invested some $258 million into Uber’s Series C round in August 2013.

And let’s not forget that Apple, which is developing self-driving car technology of its own, led a $4.5 billion investment into Chinese ride-hailing giant Didi Chuxing in June 2016. Alibaba, Tencent and SoftBank also participated in that round, which is no coincidence, considering that each have their own ambitions in the automotive industry. Two months later, in August 2016, Didi completed a $7 billion buyout of Uber China, which capitulated after a years-long battle against Didi for a share of the Chinese market.

Finally, traditional automakers have also gotten into the ridesharing mix: there was Ford’s acquisition of Chariot, a private urban mass-transit company, in September 2016, and General Motors led a $1 billion Series F round in Lyft in late December 2015, a deal which also saw participation from Alibaba and Didi Chuxing.

It’s enough to make one’s head spin. And given the litany of interconnected deals and dealmakers referenced above, the belief that the network of ridesharing investors is a hopelessly tangled mishmash of incumbents and competing interests may seem like a sound one.

But is it though? Not really.

Using investment round data from Crunchbase, we were able to map the network of investors in different ridesharing companies using Gephi, an open-source network analysis and visualization package. 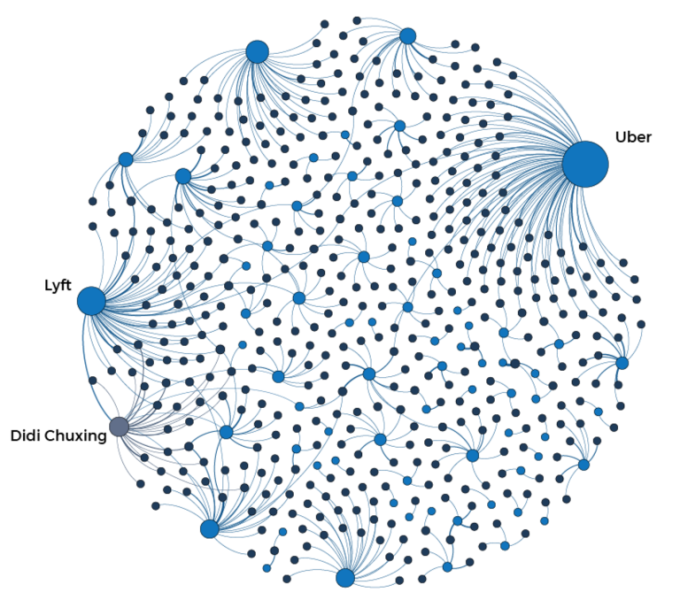 The network visualization above contains three sets of nodes (i.e. the circles):

The size of company nodes is determined by their “indegree,” a statistic derived from directed graphs that counts the number of inbound connections to that node. The more inbound connections (in this case, the more investors), the bigger the indegree score and, thus, the node in this visualization. Companies like Uber and Lyft have comparatively large numbers of investors, which is why their nodes are bigger on the graph.

The connections above are weighted by the number of rounds an investor has participated in with the company. Particularly loyal investors (those that have followed-on in multiple rounds after their initial investment) are closer to their portfolio companies’ nodes than those with comparatively few interactions.

Although aesthetically pleasing, the graph above doesn’t tell us a whole lot about the network of investment though. In order to do that, we’ve highlighted and labeled some of the ridesharing companies with their brand colors, and diffused the highlighting to their nearest neighbors on the graph (which, typically, is just their investors). Where those colors begin to blend, we can see where investors overlap with one another. 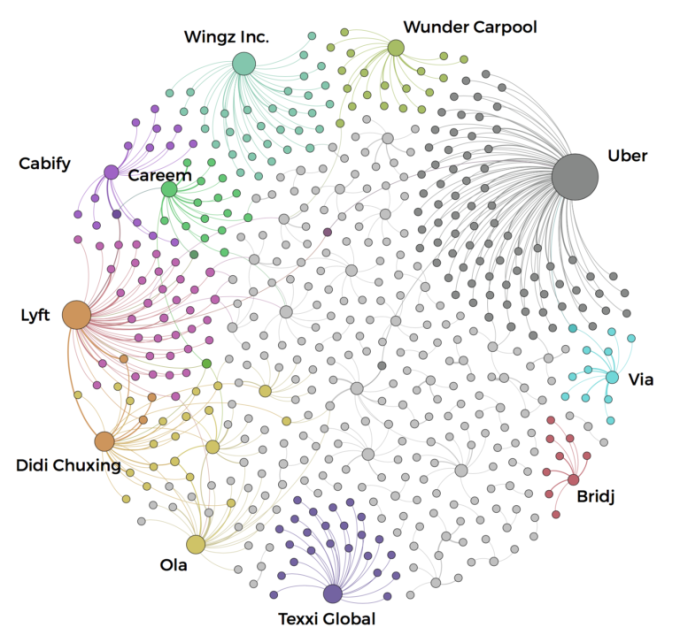 We can now see that investors in the global ridesharing industry are surprisingly cleanly divided. Most investors only have one ridesharing company in their portfolio, with only a few exceptions. Some highlights of those exceptions:

Tracing the tentacles of Didi Chuxing

There are plenty of companies in the middle of the circle that have small investor networks, but for the most part, Uber is on one side, and the likes of Didi, Lyft and others are on the other.

As we mentioned earlier, Didi Chuxing holds a somewhat unique position in this network, as it is both a company that has received outside investment and a strategic investor.

This version of the network visualization highlights Didi Chuxing and some of the ridesharing companies in which it has invested. 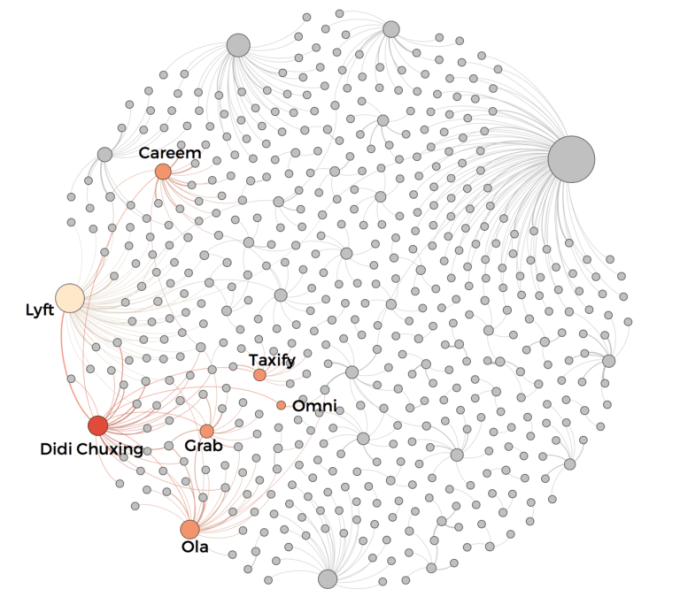 Apart from being a dominant player in its home country of China, Didi has been making strategic investments in ridesharing companies around the world. Here are a selection of its deals:

This investment strategy is, presumably, an effort to counter Uber’s global expansion. If this is the case, this strategy is an interesting exercise in investment ju jitsu. Rather than plowing considerable resources into developing ground operations in far-flung outposts around the world, like Uber has, Didi has instead bought up stakes in regionally dominant companies.

This “buy” rather than “build” approach to expanding its international reach places Didi in a somewhat unique position in the global ridesharing market. And this approach seems to be working, at least for now.

We recently learned that Didi is in the running to buy up even more of its chief rival. New York Times reporter Mike Isaac tweeted that Didi has joined SoftBank and other investors in a syndicate to purchase more shares of Uber, and this development has also been covered by The Information.

The question is, which strategy will prevail? Although Uber has a decent war chest to continue to build its operations in its many international markets, Didi is better capitalized, and has an alliance with SoftBank, the deepest pocket in VC, PE and buyouts today. As of right now, Didi is the most-funded company in the ridesharing space, with almost $4 billion more cash raised than Uber, to say nothing of debt and credit facilities. For Didi, buying its way to global domination of the ridesharing industry is a viable strategy.

With its reach expanding in scope and depth outside of China, Didi may be the ridesharing company to watch — Uber be damned.