If you were just paying attention to press releases this week it’d be easy to believe that tech companies are winning the war on hate. Responding to the violence in Charlottesville, Mark Zuckerberg solemnly reflected that there is “no place for hate in our community.” Snapchat announced that hate speech “will never be tolerated” on its platform. YouTube reassured us that helpful tools are on the way. Tech companies fled Trump’s dual business councils to protest his claim that some white supremacists are “very fine people.”

In other headlines, a coalition of web providers made a controversial and unprecedented choice to yank their services out from under the Daily Stormer, a white supremacist news site. Days later, Cloudflare abandoned the site to the whims of whoever feels like DDoSing it. Those decisions, part of the “no platforming” philosophy which would deny hate speech purveyors a place to assemble and share their views, will likely have many reverberations in the days to come. For now, some things remain very much the same.

Unfortunately, while this week’s burst of industry energy might suggest otherwise, hate groups are alive and well, making little if any effort to conceal their presence on all of the major social networks. Whether it’s 4chan or Facebook, if you go looking for hate online, you’ll find it. Dredging up racist, anti-Semitic content often in seeming violation of a company’s stated policy takes seconds — trust me, I went looking.

On something like Facebook, hate festers just under the paper-thin layer between a user’s social sphere and the platform at large. On a network like Twitter, it’s right on the surface, bobbing unpleasantly along down the stream with dog photos and journalist chatter. For anyone surprised about the terrible events that unfolded in Charlottesville: You can find hate anywhere you look and you don’t have to look very hard.

I took a grim tour around some of the major social sites into which we sink our hours to see what just a little bit of casual searching could find — yet algorithms often can’t (or won’t). Again, this content is graphic and disturbing, but pretending it isn’t there won’t make it go away.

On Facebook, white supremacist memes thrive, even in wide-open, public communities. Though plenty of hate just sits out in the open, some users skirt detection by using a kind of unsearchable, far-right code language. Facebook might pick up on the anti-Semitic slur “kike,” but by swapping that for “kayak” the content flies under the radar. I was surprised to see that surrounding words in multiple parentheses, also called an “echo,” remains common practice to denote something or someone as Jewish. These symbols were established as part of the shallowly submerged white supremacy lexicon more than a year ago.

References to 1488 also remain common, where 14 is a nod to the “14 words” or “We must secure the existence of our people and a future for white children,” a popular mantra with white supremacists and white nationalists. The double 88 is usually a nod to the 8th letter of the alphabet, or “heil Hitler.” 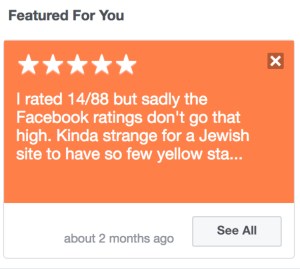 Small waves of white supremacist memes crest and fall, and much like Facebook’s fake news problem, each wave has another set right behind it and there are many oceans. When I spent some time looking through these communities this week, a particularly popular meme remixed the incredible violence of a counter-protester rolling off of a now infamous ash-gray Dodge Charger with a broad array of anti-black racist memes, some of them drawing from popular mainstream memes, like “the floor is” joke. Another pictured George Washington driving the Charger through the crowd.

One public community I found easily hosted a live stream of Saturday’s white supremacist rally in Charlottesville, the full video shot from the perspective of one of the torch-bearing attendees. It felt surprising that so much of this content was just sitting right out in the open on a social network that connects faces to names.

In his statement on Wednesday, Zuckerberg did not meaningfully clarify how Facebook will determine what stays on its platform and what goes. Though he noted that “when someone tries to silence others or attacks them based on who they are or what they believe, that hurts us all and is unacceptable,” it does not appear to be unacceptable on Facebook.

Asked how its policy might be evolving, Facebook told me that it does not tolerate hate speech or posts praising acts of violence or hate groups on its platform. This policy, like all policies, is open to interpretation and it’s possible that interpretation could shift further over time.

In spite of Reddit’s mostly hands-off policy and reliance on subreddit-specific moderators, racism on Reddit often takes quirkier forms meant to avoid potential detection. In true Reddit style, overtly racist posts and comments are often played off as self-parodies, draping a thin layer of self-referential humor over what is usually just outright white supremacy. On one thread, users enthusiastically counted up from the number 1,488,000. On subreddits like /r/greentext, users post screencaps of posts from 4chan, host of some popular far right and white supremacist communities. They’re careful not to post links to 4chan itself and by screencapping they can avoid searchable text while still replicating most of the content.

Following the violence in Charlottesville, Reddit told me that it banned /r/physical_removal for “a violation of our content policy, specifically, the posting of content that incites violence.” The company appears responsive to user-generated campaigns when they draw sufficient attention to an issue, which appears to be the goal of /r/AgainstHateSubreddits, a compendium of Redditor-reported hate speech.

Initially, YouTube’s search made finding white supremacist stuff kind of hard. Given Google’s web search prowess it makes sense that the company would do a better job of burying objectionable content than a site like Facebook, but it wasn’t buried very deep. After a few searches didn’t turn up much, I struck Nazis on a video that prominently displayed a 1488 with a slew of links to the Daily Stormer. 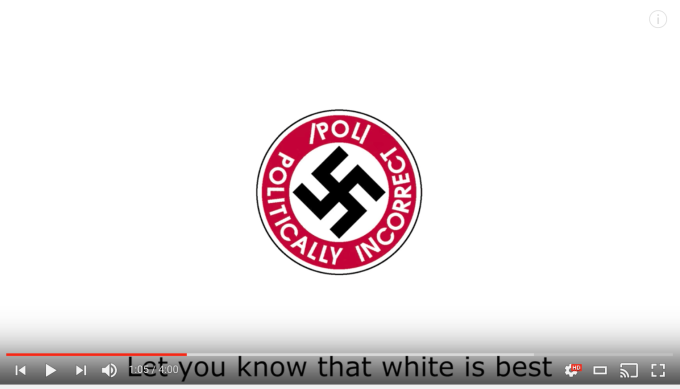 Because it’s an entertainment site as much as a social network, many of my search results were home-brewed music videos depicting Nazi imagery with little or no context. A cursory glance at the user names and links was the only overt hint, with, again, many, many 1488s. Some more narrative racism came with disclaimers that the content was satire or just a joke.

Elsewhere, content drawn directly from 4chan’s infamous far right hub /pol/  (short for “politically incorrect”) was repurposed on a more mainstream platform. Because YouTube, like many of these sites, offers recommended content related to what you’re viewing, stumbling onto a little bit of white supremacy opens up a cascading slide of swastikas and racial epithets. Just a few clicks away from a music video declaring whites the master race I ran into a video created by “fashygamer1488” with the following text:

“Hey goys, its [me] here with another video, please write ur comments below, no (((jews))) or googles allowed (Google is a secret alt-right codeword that means the N word lol)…”

In June, YouTube followed Reddit’s example, creating a separate class of objectionable content that it would no longer monetize. This followed a corporate outcry from brands concerned that their ads were being served along with videos containing hate speech. In just a little bit of time spent browsing YouTube’s white supremacist content, I did not run into anything that set this content apart from the rest of its videos, though YouTube has said that feature is coming “soon” and that the “videos will remain on YouTube behind an interstitial, won’t be recommended, won’t be monetized, and won’t have key features including comments, suggested videos, and likes.”

For now, the suggestion engine hums along, pointing me toward a selection of Hitler youth haircut instructional videos. 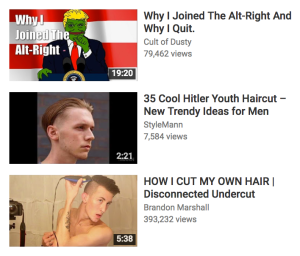 Twitter is more responsive as a search engine than something like Facebook, but the search results are often messily curated. My first search for 1488 quickly pulls up tweets like a picture of a white, blue-eyed baby with the text “14 words” and a photo of Hitler. In other tweets, users with neo-Nazi black sun icons and hybrid Trump/Hitler background images call each other “fags” over who is and is not “boomerposting” (i.e. tweeting like a baby boomer).

Unsurprisingly, Twitter has it all. White supremacist demagogue Richard Spencer trying to remain relevant while his peers accuse him of being a Jew. Quotes hailing Trump’s off-the-rails presser that defended some white supremacists as “fine people.” Racist code words that reverse virtue-signal hate to anyone looking for a like-minded follow. Jokes about cars caked in Photoshopped blood. All of it sends the same message. 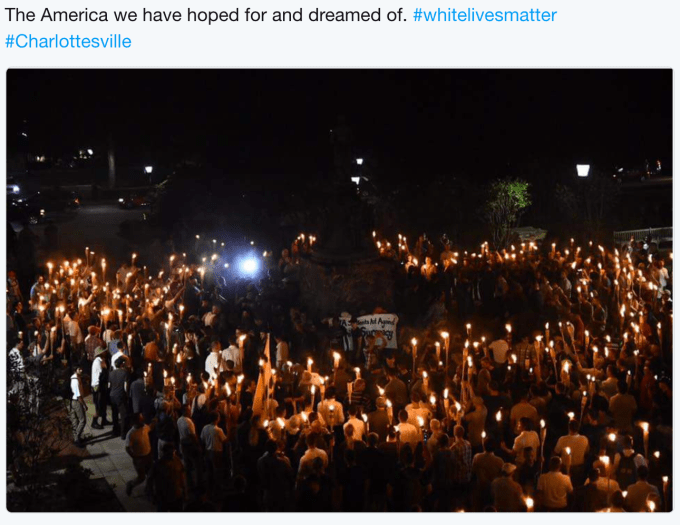 Tech at a crossroads

These major platforms offer a taste of the toxicity flowing through mainstream social networks, but there are many others. After incubating this kind of stuff for ages, gaming chat platform Discord just finished a major purge. Tumblr, Instagram and Snapchat are fighting the same fight and it’s not clear they’re winning. Meanwhile, far right offshoots like Gab are specifically designed with sustainable white supremacy in mind. The absolute ubiquity of Nazi insignia, Stormfront links and shockingly violent memes would appear to undercut objections by the extreme right that their speech is being suppressed with much success at all.

Depending on how you use the internet, the fact that this stuff is so easy to find on major social networks could range anywhere from shocking to wholly unsurprising. But the truth is that most of us shy away from looking at it. For anyone who isn’t the target demographic, all of this hate is ugly and exhausting. We’d rather just rest easy knowing that tech companies are working on it and they’d rather we didn’t haul up more of this stuff — they’re working on it.

As we can see from tech ratcheting up its response following Charlottesville, no policy is set in stone. While companies often point users to policies around what does and doesn’t fly on their platforms, ultimately the decision to ban content is a subjective response to getting too much heat. Given that willingness to bend to public sentiment, corporate pressure and user-driven anti-hate campaigns are proving themselves to be powerful tools, even if it’s not clear where exactly to draw the line. Racial slurs? Nazi insignia? Overt threats of specific violence? For tech, the coming weeks will be a bellwether.

Anywhere you go, white supremacist content has a foothold if not an entire underground compound bedecked in red and black — one that remains even after the Charlottesville backlash. All one needs to do is look. Whether tech companies choose to see is a different matter altogether.