Amazon has been doubling down on its private label business in recent months, though many of its own brands aren’t easily identifiable to consumers as they don’t indicate they’re Amazon-made products. But these private labels have been gaining steam, according to a new report out this week from 1010data. Several Amazon brands have been seeing tremendous growth, it found, including AmazonBasics, kids’ clothing brand Scout + Ro, Amazon Elements, and other Amazon-made devices like Echo, Kindle, and Fire TV.

During the first half of the year, Amazon’s private labels accounted for just 2 percent of total units sold, excluding marketplace and subscriptions, but the retailer boosted that figure to 12 percent during Prime Day, the report found.

Not all that surprisingly, Amazon’s private label line AmazonBasics was the top performer so far this year. This line today includes a wide array of “everyday essentials,” including electronic accessories like HDMI cables and phone chargers, batteries, (non-Alexa) bluetooth speakers, pet supplies, office accessories, and even home goods like bed sheets, bath towels, and knife sets, among other things. In total, it accounts for nearly 2,000 different products, making it Amazon’s largest private label to date.

According to 1010data, this group of products pulled in over $200 million in sales during the first half of 2017. 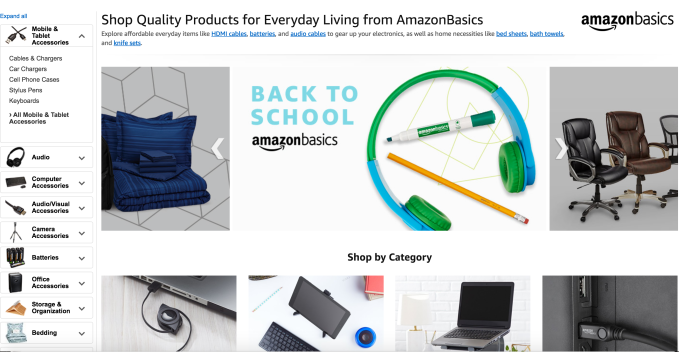 That was closely followed by Amazon’s private label electronics lines, including Echo, Fire TV and Kindle, which pulled in $120 million, $110 million, and $75 million, respectively during the same time frame. Combined, they accounted for 55 percent of Amazon’s private label sales, the report said. Echo was a huge part of this growth trend, with sales doubling year-over-year (up 101 percent); however, Kindle Fire sales have nearly tripled, up 184 percent year-over-year.

Amazon Elements, which is one of the retailer’s oldest private labels, is best known for its baby wipes, but it recently expanded to include health supplements. The addition seems to have helped, as it was another top performer with $9.5 million in sales during the first half of the year.

More recently, Amazon has been moving into the fashion business, with a growing collection of own-label clothing lines. A few of these are already seeing traction. Women’s clothing brand Lark + Ro, men’s dress shirts from Buttoned Down, and staple clothing items from Amazon Essentials all made the top ten.

Meanwhile, kids’ clothing brand Scout + Ro has seen the most aggressive growth, with a 542 percent increase year-over-year. This growth is tied directly to the line’s expansion – over the past year, the line has grown its product selection by fivefold. Other gaining private fashion labels include men’s shoes Franklin & Freeman and women’s clothing brand Lark + Ro.

But not all the private labels are seeing increases. Even though bedding and bath brand Pinzon pulled in $6.6 million in the first half of the year, it sold fewer units this year compared with the last, leading to negative 28 percent year-over-year growth.

The report also dove into conversion rates for Amazon’s labels, and found that Amazon Elements is stealing the show with a 42 percent conversion rate – or four times better than any other Amazon brand.

The report examined individual SKUs, as well, to see which items were the best sellers among the private labels. Fire TV Stick with Alexa Voice Remote came out on top, followed by the black Echo Dot speaker, then several AmazonBasics products. The original Echo and Echo Dot in white also made the top 10. Echo devices’ presence on this chart also isn’t too surprising – these items were Prime Day’s best sellers, it was reported in July. 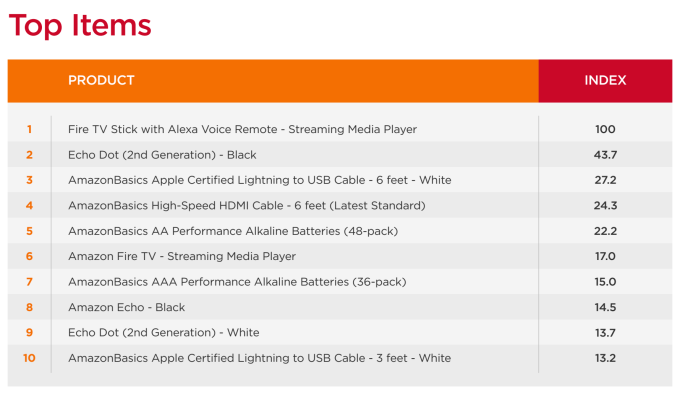 Amazon has no intention of slowing its private label business, it seems. A recent Quartz report uncovered a good handful of new trademarks for private label brands that haven’t yet launched on the retailer’s site. The reasoning here is obvious – private labels have better margins, and will increase Amazon’s bottom line.

The company’s strategy for its private labels differs from brand to brand, however. In some cases, the brands are exclusive for Prime members, while others are broadly available. Brands like Kindle, Echo and Fire are well-known as Amazon products, as are those with “Amazon” in their name. In fashion, Amazon is hiding its association for the most part, beyond the everyday wear found in Amazon Essentials. That’s typical for private label fashion, though – Target and Walmart do the same.

But Amazon’s advantage over brick-and-mortar stores is that it can promote its fashion labels to shoppers over others, if it chose. It’s also poised to launch Prime Wardrobe, a home try-on service, which rumor has it may integrate with Echo Look. It wouldn’t be surprising to see it also leveraged to push Amazon’s own fashion brands to consumers, either.

1010data doesn’t specifically detail its data sourcing due to contractual obligations, but it broadly says that its market analysis involves proprietary information arising from tracking consumer purchases offline and online.