Meet Teleport: An app that’s using a trained neural network to power a selfie-editing feature that lets you change the color of your hair at the touch of a button.

Fancy seeing how you’d look with red locks or blue? No problemo. Just upload your selfie, wait a few ticks while the AI gets to work figuring out which bits of your face are hair and which are not, and then tap on a shade of your choice to try out a new do.

Co-founder Victor Koch says the team’s experiments with neural networks have resulted in an app that makes hair coloring “qualitative and closer to natural”.

The app also lets you blur the background of a selfie. Or insert alternative backgrounds, including uploading photos of your choice.

But its most eye-catching feature is definitely the ability to generate an instant collage of brightly mopped selfies — offering a sort of insta-pop-art that’s ready to load straight into Instagram to ask your followers which look works best for you.

While not perfectly photorealistic in every instance, results can look relatively realistic, depending on how dark/light your natural hair color is — and at least give you an idea of what a particular hair dye might do for you.

Teleport launched officially in late July, initially in Europe, before being opened up globally. Koch claims it’s had two million downloads at this point, and generated more than 75k shares on Instagram thus far, or ~250k across social platforms in general. Instagram is where Teleport’s makers are clearly hoping to grab #attention. 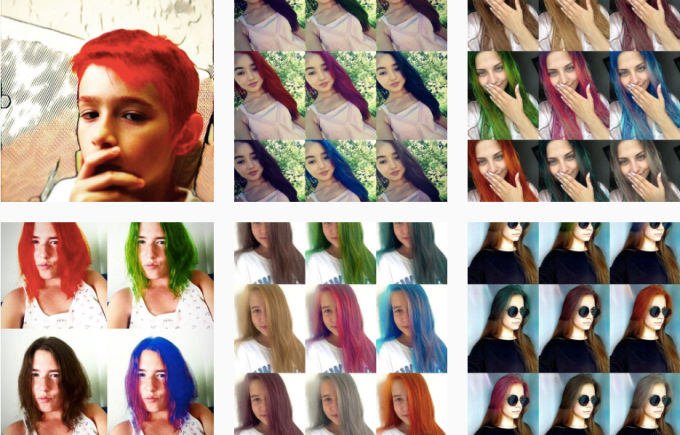 Koch describes the app as a “neural photo-editor” — putting in the same category as the likes of the rather more radically transformative FaceApp, which had a moment of viral popularity earlier this year when people realized its gender-bending potential.

Last year another viral hit in the ‘neural photo-editing’ space was Prisma, which utilized AI running on smartphone hardware to power a style transfer feature that could turn plain old photos into painterly graphics in the style of particular artists.

Since then, style transfer has been absorbed into mainstream apps, with social giants like Facebook cloning the feature. While Google has been working in this space for longer, building automatic photo-editing features powered by AI and baking them into its own photo products to enhance the feature set.

In Teleport’s case, Koch says they’re using convolution neural networks for semantic segmentation of images/video — the team also has an app for selfie-video that lets users change the background as they shoot.

Teleport’s selfie editor app has been in development for around seven months, according to Koch, with the US-based team having raised $1 million thus far from private investors to fund development.

“The idea was born out of a set of experiments using neural networks… On complex problems, wide and deep networks significantly outperform small networks and other methods based on manual feature creation due to their flexibility but require a sufficient amount of data to avoid overfitting. However their processing time, size, and memory consumption are also much larger,” he says.

“We train our models using Tensorflow, because currently it is the most powerful and actively developing deep learning framework. We have several Amazon Instances which we use to train our model. Our dataset consists of 30k photos chosen manually. Moreover, we created our own framework which is up to 20 times faster than the popular Tensorflow library.”

The app is a free download, as you’d expect for this sort of visual novelty, but the team reckons there could be monetization potential in future by integrating with large cosmetics companies — i.e. those which sell hair dyes, since the app can reproduce the colors at least quasi-realistically and offer ‘try before you dye’.

Koch says they do also plan on adding more features, such as the ability to change hair color in real-time video, and, er, change skin color… The latter does sound a tad ill-advised, given, for example, the controversy around Snapchat’s Bob Marley filter last year. FaceApp also had to apologize after it made a ‘hotness’ filter that bleached the skin of POC.