Venmo today rolled out a feature designed to make it easier to find friends within its mobile payments app, so you can add them to your connections list or get paid yourself. The feature, found under the new menu option “Scan Code,” is available now in both the iOS and Android version of the Venmo app. When tapped, it launches a new interface that allows you to either use the phone’s camera to scan a friend’s code or view your own, unique Venmo code.

Your Venmo code itself is a simple QR code that links to your profile in the app.

In addition to being able to scan the code from the phone’s screen directly, a built-in sharing feature lets you post your code to other messaging applications, including iMessage, social networks, email, notes, or save it as an image to your phone’s photo gallery for later use.

A small QR code also appears next to your profile photo, above the app’s navigation. A tap on it will launch a full-screen view of your Venmo code, ready to be scanned. 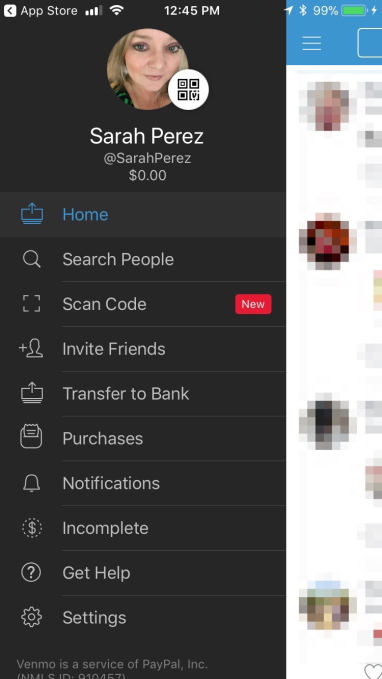 Though a somewhat minor addition, the launch of QR codes goes a long way to make it faster to add friends on Venmo – something that’s a particular challenge when you’re looking for a friend who has a common name, when you don’t know a friend’s contact information, or whose Venmo handle (their @username) isn’t easy to guess.

Prior to this, users could add friends by sending them an initial payment using either their phone number or email address. Or you could login to the Venmo homepage and send an invite. The Venmo mobile app could also tap into your phone’s address book in order to automatically add friends, and allow you to send invites to those who weren’t yet using Venmo.

Venmo is not the first to implement QR codes in its app. The use of QR codes in social apps has grown more popular in recent years in the U.S. – especially after Snapchat’s 2015 launch of its cooler take on the aging barcode format with “Snapcodes” for connecting the app’s users.

And in China in particular, it’s already fairly common to scan QR codes for payments, in addition to other use cases, like adding friends or downloading WeChat mini programs, among other things.

Other mobile apps, including Messenger, Kik, WeChat, Line, and, most recently Spotify, among others, have adopted QR codes, too. Even Apple has woken up to the QR code’s popularity – its iOS 11 operating system, still in beta, will support QR code scanning right from the camera.

Venmo’s new QR codes are available in the updated version of the Venmo mobile app for iOS and Android, out now.

Update: Venmo has now published an official announcement detailing the new feature on its blog.