Public markets are riding high, and many big tech acquirers are flush with cash. However, it’s a very dull year for big acquisitions of private technology companies.

Seven months into 2017 and we’ve seen just one big unicorn M&A deal: Cisco’s $3.7 billion purchase of AppDynamics. And that was back in January. Two other one-time unicorns acquired this year, data management technology provider SimpliVity and Middle Eastern online retailer Souq.com, sold for well below their peak private valuations.

The unicorn M&A scene looks particularly sluggish and valuation-challenged when compared to last year. In 2016, acquirers snapped up five tech unicorns at prices that were higher or about the same as their private valuations (here’s the list). And none of those companies had to first dangle the prospect of an impending IPO, as was the case for AppDynamics, which sold days before its planned public debut. 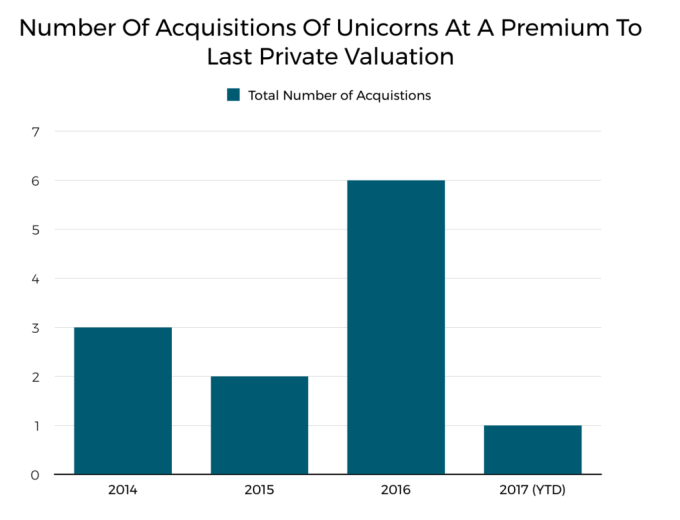 It’s not just the unicorn space where big deals aren’t happening. So far this year, only 17 well-funded private technology companies (defined here as those that raised $20 million or more in venture investment) have gone on to be acquired for disclosed or reported valuations over $100 million. Meanwhile, in 2016, there were almost that many at valuations of $500 million or more. 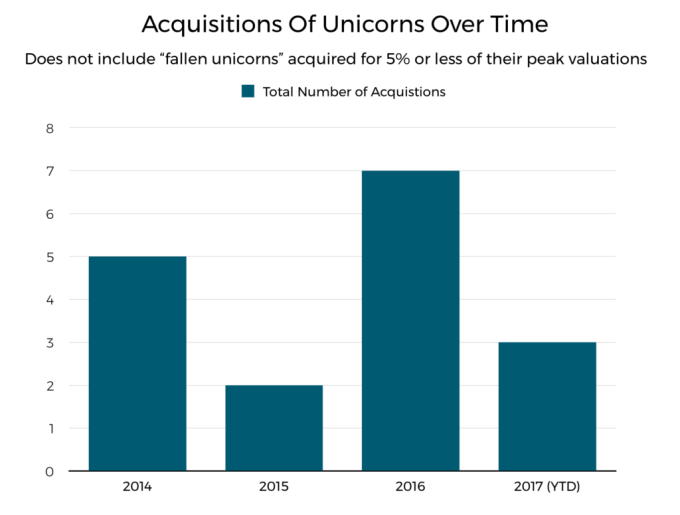 What does it mean?

So what’s going on? Can this be written off as just a slow period for big venture-backed M&A? Is it a valuation issue? Or are there structural shifts occurring that explain acquirers’ wariness to shell out for big purchases?

“It could be happenstance, or some sectors may be running into resistance due to high multiples,” says David Blumberg, managing partner at early-stage firm Blumberg Capital. He added that acquirers may also be waiting on the sidelines to see what happens with proposed tax reforms.

A Trump administration plan to dramatically reduce taxes on repatriated earnings may be a factor in delaying M&A. Currently, big technology companies are holding hundreds of billions of dollars in overseas accounts to shelter their earnings from U.S. taxes. Apple alone is estimated to be holding on to a cash stockpile of more than $250 billion, most in non-U.S. accounts. The Trump proposal would reportedly cut public companies’ income tax rate to 15 percent from 35 percent. It would also cut the tax on repatriated offshore earnings to 10 percent.

Fast-growing, venture-backed companies are also finding it easier to stay private longer, making them less receptive to sub-optimal acquisition offers. After all, who needs an exit when SoftBank is offering a fast $200 million?

Typically, Kulkarni says, early investors are looking to sell 10 to 15 percent of their holdings, and employees somewhat more. Such sales are no substitute for an acquisition or IPO exit, but it can help a company retain key employees, satisfy stakeholders and delay exit by perhaps a year or more.