Face-morphing app FaceApp, which uses a neural network for editing selfies in a photorealistic fashion, has updated its iOS and Android apps to what it’s calling FaceApp 2.0 — further fleshing out its monetization play with a Pro version that contains a series of selfie styling/beautifying filters.

The app became a bit of a viral hit earlier this year, off the back of a set of free filters that let people radically change the appearance of a selfie or portrait photo, including adding a toothy smile, switching genders, and dialing age appearance way up or way down.

It also ran into some race controversy over a ‘hotness’ filter which had originally been included in the app, after people found it was lightening skin tone as one of its ‘beautifying’ effects — leading to accusations of prejudice.

The founder subsequently apologized for what he described as an “unfortunate side-effect of the underlying neural network caused by the training set bias” — and the offending filter was renamed, while the team worked on a fix.

v2 of the app still includes a selection of free filters (though no longer a ‘hotness’ filter), grouped together under the heading “fun”. There’s also a new section called ‘Style’, which requires a Pro upgrade.

The face-altering effects being offered here are more obviously aimed at burnishing and beautifying the appearance of selfies, which FaceApp is hoping people will be willing to pay for, including a “makeup” filter and a “hipster”, goatee-adding option.

v2 of the app also includes support for face-morphing full-size photos, and a refreshed UI. 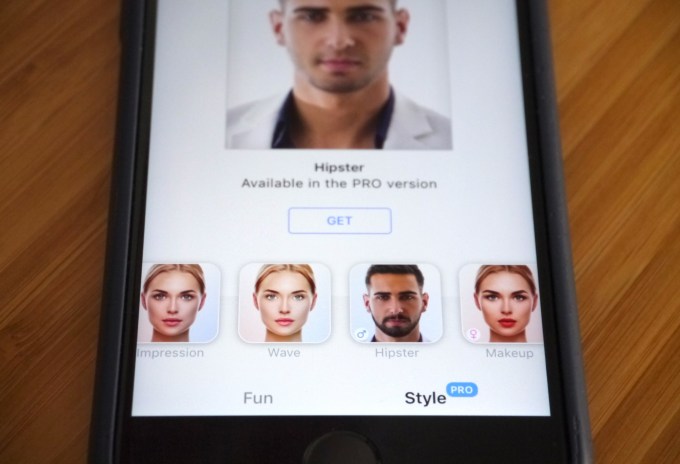 “Before this update, you could upgrade to the Pro version to get some extra features (e. g. remove watermarks) and turn off ads,” notes founder and CEO Yaroslav Goncharov. “The feedback we got is that there are a lot of people that are ready to pay for our app but expect to get new filters in return.”

Goncharov won’t disclose any new usage metrics for FaceApp at this point, but says since its initial release in January it’s had more than 45 million downloads.

Whether many users can be convinced to shell out for a few selfie beautifying effects remains to be seen, as there are a lot of existing apps that offer such effects — including multiple makeup apps/apps for smoothing and softening skin tone, and/or giving you a stylized cute/kawaii look (e.g. long-time Chinese app Meitu).

Whereas FaceApp grabbed initial attention for the novelty of its more radical alterations, such as a gender swapping feature which has led to the strange (and sometimes) public pass of men longing to meet their female selves. And women creating female versions of leading men in the Trump administration…

I used FaceApp on the men of the GOP. I call it "Too Many Pams." pic.twitter.com/nLvOjLGNXo

Clearly these novelty filters have helped raise FaceApp’s profile. It’s less clear whether a reputation for silly and/or uncanny valley neural network effects will translate into lots of paying customers for rather more subtle selfie alterations.

We also haven’t had a chance to test out FaceApp’s new style features, so can’t assess how well they stack up against existing selfie beautifying apps. The hipster goatee does at least sound a bit different — if not necessarily something lots of people would be willing to pay for. Especially as pricing for Pro looks pretty steep; it’s listed as $20. (Update: $19.99 is for a lifetime subscription; there’s also a $1.99 monthly subscription; or $9.99 per year option.)

Asked if they are confident they’ve fully fixed the race controversy issue, Goncharov says that avoiding the pitfall of algorithmic bias is something that requires ongoing attention.

“When dealing with such complex algorithms and neural networks, it would be naive and even irresponsible to declare such an issue completely fixed. It is an ongoing process,” he tells TechCrunch.

“What I can say is that we are committed to keeping this issue in mind at all phases of our product cycle from creating datasets and training neural networks to quality assurance and processing customer feedback. Our style filters designed to preserve ethnicity origin and our tests show that they do this quite well.”