Mystro hopes to put 33 percent more money per year in the pockets of Uber and Lyft drivers through an app.

It’s tough out there for on-demand drivers, and every second en route counts if they want to hit that bonus or just bring enough home to make the rent. But there’s a bit of an art to maximizing earnings, and it takes a while for newbies to get the hang of how it all works. There are countless articles and tips on the internet to help them do it, but Mystro co-founder and three-year Uber veteran Herb Coakley wants to make it easier and safer for everyone on the road from the get-go.

His app helps drivers continuously pick up the most profitable rides in the shortest amount of time, based on the filters each driver sets. All a driver has to do is tell the app they’re ready to go and it’s a hands-free experience after that.

Coakley, who holds a masters in physics and was making films in L.A. before his life as an Uber driver, says it took him hitting rock bottom to come up with the idea. “I was going through a divorce at the time and basically hit a pretty tough spot trying to figure out what I was going to do next.”

He was sleeping in his car and then later at a friend’s house when he saw a commercial for Uber drivers. He soon joined and quickly realized how difficult the job can be.

“Everyone said to make money you gotta drive for both [Uber and Lyft] so I did that but I started realizing how hard it can be switching back and forth between apps and it just seemed so unsafe. You have to keep your eyes on the road but tap between apps,” he said. 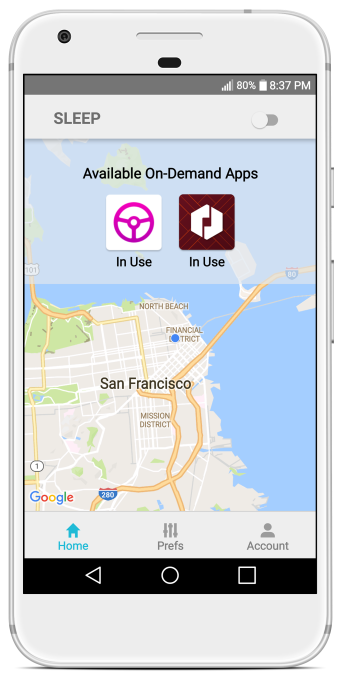 Coakley started thinking up a better system and asking trusted experts how he could make something that would seamlessly integrate the apps and maximize profit, but everyone told him there’s no way to do it without getting permission to scrape Uber’s and Lyft’s APIs.

He knew that wasn’t likely, but moved himself up to San Francisco to see if some of the developers here might be able to help. They weren’t. Coakley was about to give up when he thought to put an ad on Craigslist and see if anyone could help him there. That’s where he met Matt Rajcok.

Instead of building on Uber’s and Lyft’s APIs, Rajcok proposed using Android’s AccessibilityService. This service is used to safely guide those with disabilities using Android apps and proved a good source for combining Uber and Lyft driver apps.

Coakley and his co-founder Dwayne Shaw couldn’t afford Rajcok or any other developer at the time but, as a little Silicon Valley luck would have it, Coakley was telling one of his passengers, Googler Andrew Taylor, about the idea. Taylor thought it was pretty good. Bonus, Taylor also happened to be running a small investment firm on the side and soon cut Coakley a check for $100,000 to build the app.

He hired Rajcok with the initial investment, grew his user base to more than 10,000 and is now in Y Combinator’s latest batch of startups.

“The last six months have been the weirdest thing in my life, ever,” Coakley told me over the phone.

Mystro is limited to drivers who have an Android phone for now. Though, Coakley says he’s still looking into a workaround for iPhone and that he’s reached out to Uber and plans to reach out to Lyft to see if now they’d be open to working with him. He hasn’t heard back so far, and there’s always the possibility they could sue or try to shut down what he’s doing.

“We had our lawyers go through and we really did a lot of work to make sure we were on the right side of everything,” Coakley said. But he’s hopeful Uber and Lyft will see what he’s doing as a positive.

“The safer it is and the more money they make they’re more likely to stay on the platform. That actually helps everybody,” he said.

Drivers interested can test out the service for free for up to 10 rides per week. It’s $12 per month after that, or $99 for the year.