Wi-Fi hotspot maker Karma Mobility will this fall unveil a specialized version of its KarmaGo hotspot device that includes built-in security features, including support for private anonymous browsing through Tor, an integrated VPN, black listing, and ad blocking. For customers, the promise is a device that encrypts your web activity, hides your physical location and identity, and adds protection against invasive advertising and malware, among other things.

To what extent this will all work as promised still remains to be seen – the “Karma Black” device, as it’s called, isn’t being made available for sale until September, the company says. It’s also not detailing specifics, like the product’s hardware specs or its pricing at this point.

However, Karma is promising some sort of trade-in offer for existing KarmaGo customers who want to take advantage of the new Black product. Beyond the additional security features, the device may be worth swapping out because it’s likely to sport new hardware internals, as well.

It’s sort of funny that a privacy-focused device is coming from Karma, of all companies. The original value proposition for the device maker was one where users would openly share their hotspot with others nearby. This would reward the Karma device owner with a credit to their account and additional data. If you actually wanted the security of using a private Wi-Fi network with a passphrase, you’d have to subscribe to Karma’s premium service.

According to Karma’s announcement, the Black device will also take advantage of the same 2G/3G/LTE service the KarmaGo offers, which is today available as tiered “Pulse” monthly subscriptions, based on GB used per month, or available on a pay-as-you-go basis through “Drift.” 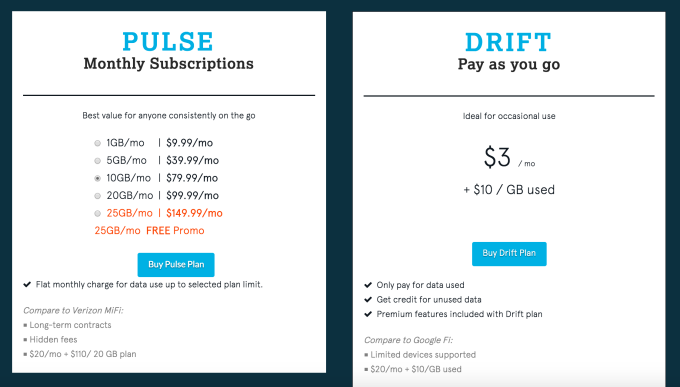 The company last year had to revamp its data plans, after having introduced an Unlimited plan called Neverstop that it found to be unsustainable. Karma had first tried to save the Neverstop plan by throttling speeds and introducing data caps before realizing it just wouldn’t work. Disappointed users were offered refunds as a result, and ultimately it was a bad look for the company, and may have impacted its ability to retain loyal customers.

The new plans Karma introduced weren’t as competitive as Neverstop once was, given its promises of worry-free data usage for just $50/month. Now, when you hit your data limit on the Pulse tiered plans, you either have to upgrade to the next tier up or buy another GB of data for $15. That’s more in line with the going rate for overages across carriers (and $5 more than Google’s Project Fi.)

That could also mean there’s less of a draw for Karma devices, especially amid user concerns that its plans could be revamped again with little warning.

The Karma Black is clearly meant to shift focus away from data plan pricing as a selling point for Karma devices. Instead, the company is positioning the product launch as a response to the elimination of FCC regulations that had prevented internet providers from selling customer data to advertisers.

In other words, buy a Karma device to snub your nose at the telcos, is the message between the lines here.

“Karma is committed to protecting the privacy of our customers, even in the face of these regulatory challenges. Getting or staying ‘off the grid,’ in terms of surfing the public internet, is more and more important to people who believe that being online should not mean giving up their right to lawful private activity,” said Todd Wallace, CEO of Karma Mobility, in a statement.

But despite its lofty goals, a device like this will have challenges in carving out a niche for itself.

Security-minded pros will be underwhelmed with its limitations, and feel their existing setups are more secure and trustworthy. Meanwhile, a number of mainstream users may not even understand the changes for ISPs that involve reselling their customer data. Or they’ve given to a feeling of defeat – of course everything you do online is tracked and for sale. I guess that’s just the price you pay for internet access, they say, sadly shaking their heads.

Karma says it will release more information regarding the Black’s distribution plans later in the month.