Hyperloop One is celebrating record achievements with its Phase 2 tests on its Nevada DevLoop track, but the company is already looking ahead to what comes next.

I spoke to CEO Rob Lloyd about how Hyperloop One got to today’s 192 mph XP-1 pod speed record, and what happens now, both for further technical testing and from a business perspective.

The next step for the testing facility, aside from increasing speed incrementally until it can reach the top achievable velocity of 250 mph on the current 1620-foot length of test track, is building and testing an airlock system that will allow passengers and cargo to be loaded onto, and off of the XP-1 pod at stations along a future Hyperloop transit route.

“We are actually now starting to install the concept of an airlock, so that we’ll have an entry and exit way to load the pod, which will then inform station design and other parts of the overall system,” Lloyd said. “The next big step is airlock, and further development of some of the core tech.”

Further technical testing could include an extension of the DevLoop test track, Lloyd said, though he also added that he’s not sure yet if Hyperloop One will end up pursuing construction of that extension. The team believes they’d need an additional 2,000 meters (about 1.2 miles) of track to achieve a max theoretical speed of 700 mph for the test pod, which is what it could possible reach in real-world commercial systems. “The math of acceleration has followed exactly our predicted patterns,” Lloyd added, leaving him confident that those speeds are real-world achievable. 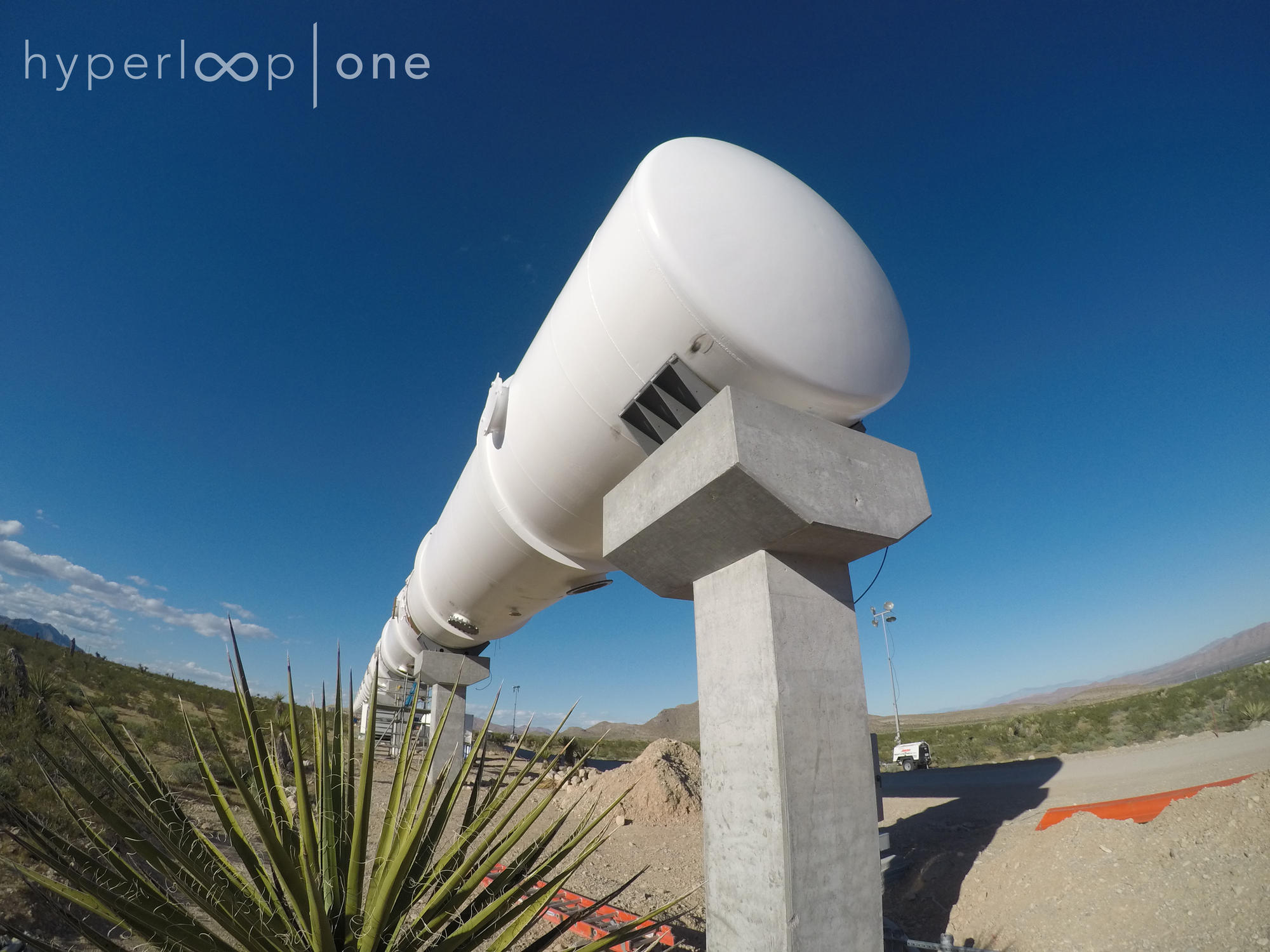 The final tube installed on the DevLoop test track in Nevada.

Timing for these tests was perfectly in line with Hyperloop One’s planning, Lloyd says, including the work that went into getting the track ready for this first test after its initial system trial in May. That included extended the magnetic levitation track, depressurizing the entire length of tube and updating the motor and guidance systems, he said, all of which performed successfully in keeping with company projections. Lloyd notes that this was all done with temperatures in the desert exceeding 115-degrees Fahrenheit, too.

Meanwhile, these tests also help set up Hyperloop One for more discussions with potential commercial partners, including government and transit authority regulators, Lloyd says. They’re at the stage now where discussions can focus on making sure the funding sources and necessary approvals are being locked down, and Lloyd says it should help them maintain their target dates of announcing the first fully fleshed out projects and confirmed partners by early next year, and operating the first three active Hyperloop systems (either transit or cargo) by 2021.

“I would say the big pivot for the company now is to actually engage in deep commercial discussions with governments and customers around the world, about the projects that they’ve been imagining that they could solve with Hyperloop technology,” Lloyd explained. “Our focus now is really shifting, not just the tech, but to the commercialization phase.”

Ultimately, Lloyd thinks that what Hyperloop One has accomplished most with these tests is demonstrate the speed at which it can operate: With a relatively small team of 300, it managed to create and use this fully functional full-scale test track and pod within just 10 months, he points out. He’s hoping that sends a message to potential partners: specifically, its signals that Hyperloop One isn’t just ready to talk – it’s ready to build. 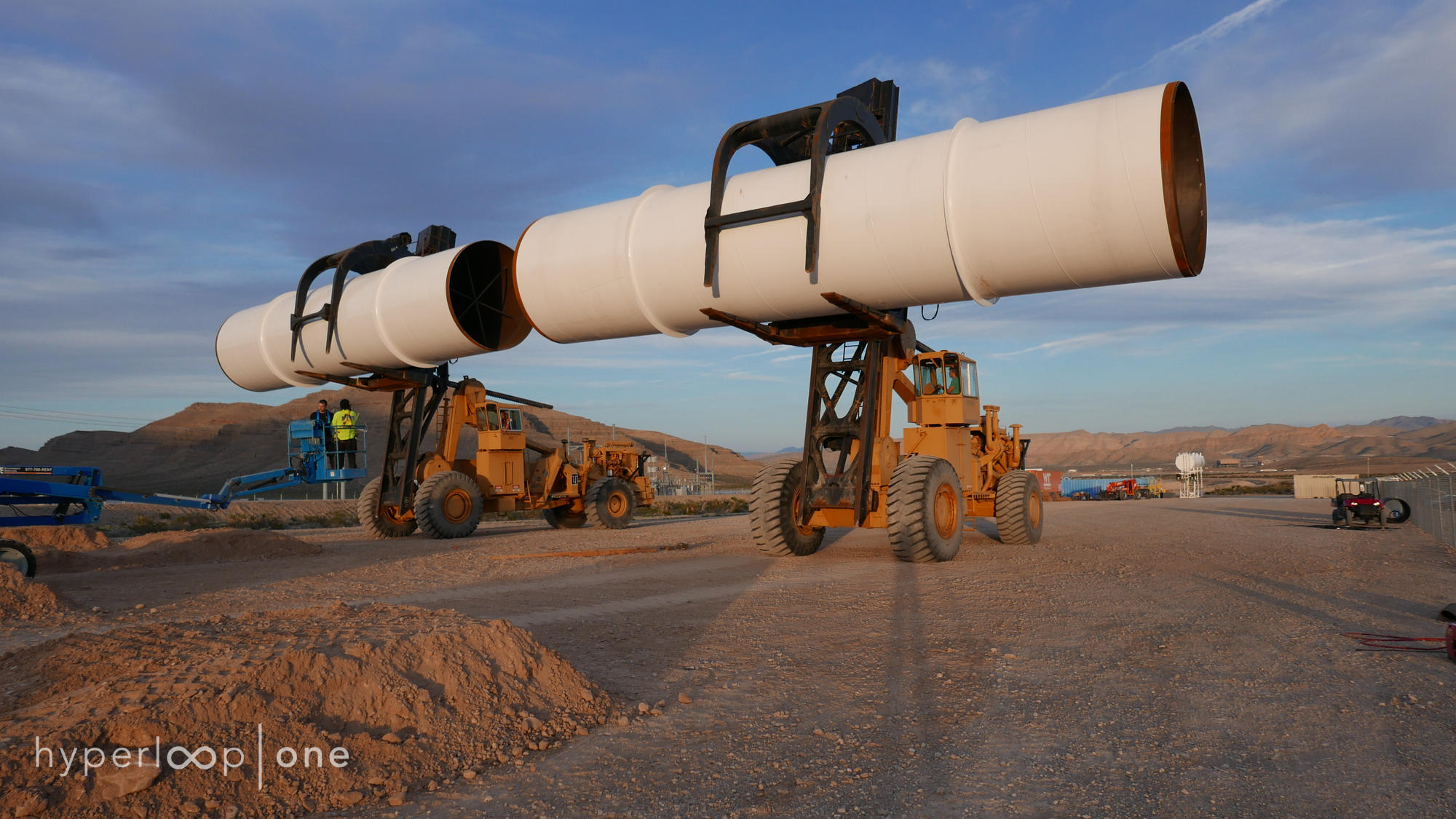 The DevLoop’s humble beginnings. It was built in just 10 months, start to finish.

Last October, Hyperloop One announced a $50 million investment round, with the goal of using that funding to achieve a full-size system test, and that’s what Lloyd says they’ve now achieved. He remained coy on specifics of current and future funding efforts, but said he has confidence in CFO Brent Callinicos’ ability to pull of the same kind of “magic” he achieved earlier on in his career as CFO at Uber during one of its early key phases of growth.

Hyperloop One still has a long road ahead in terms of getting to full-scale commercial roll out, but it’s making progress at a rate few probably though likely in terms of showing the real viability of the system, and its ability to construct full-scale working Hyperloops. Regulatory approval may prove a more challenging hurdle than the tech, in some cases, but it seems eager to take on that challenge.