Four years ago, the deep state was the enemy. Edward Snowden had just revealed its machinations. The head of the NSA was angrily catcalled during his Black Hat keynote. “We”–hackers, individualists, and/or everyone in tech who hopes we’re building a better future–readied for a battle against surveillance capitalism and the surveillance state. How hopelessly wrong we were.

Four years later, the deep state seems much more like the enemy of our enemy. The cultural and political battle which has actually arisen is one against — bizarrely, surreally — 19th-century style ethno-nationalism; against people who want to forcibly deport millions from their homes, people who want to oppress minorities of all kinds, and, not least, outright white nationalists. It seems that angry, scared, insecure men and women worldwide have responded to ever-increasing complexity and interconnectedness by resorting to the old-fashioned simplicities of racism, xenophobia, homophobia, transphobia, Islamophobia, and other forms of hate.

And, uh, I’m sorry to say this, but while I know that in our heart of hearts we all imagine ourselves as the true iconoclastic rebel heroes boldy and bravely standing up to The Man, courtesy of years of Hollywood … in this battle, the other side thinks of themselves in exactly the same way. There is no shortage of hackers / iconoclasts / individualists among the white supremacists. Consider Weev, once quasi-respected for his trolling skills, once a semi-hero/martyr in the hacker world for his (admittedly bullshit) conviction for the crime of incrementing a URL, now an outright neo-Nazi. Consider Curtis Yarvin. Consider former tech journalist Milo Yiannopolous.

“We,” or at least too many of us, are still operating with the same, wrong, mindset. That old battle against The (Surveillance) Man won’t help much if we lose this new battle first. Strong crypto is not an especially good defense against street police brutality, immigration bans, bans on military service, and ethnic cleansing in the form of mass deportations. This isn’t so much a battle against Authority as it is a battle of ideas. (So let’s keep in mind that it looks really really bad, in the arena of ideas, when “we” appear to be opposed to free speech — even when the speech in question is despicable.)

This new confrontation is still a very technical one. You only need to scan the headlines from the last year to realize that this is in large part a battle of hacks and leaks, ranging across the spectrum from personal to nation-state, and a battle of “information operations.” Check out this remarkable slide from this year’s Black Hat keynote, courtesy of Facebook CSO Alex Stamos: 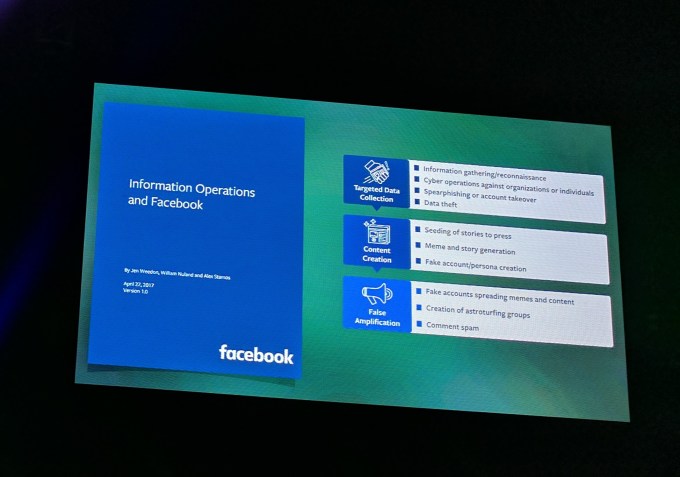 So maybe we need to stop trying to adopt the Snowden-era mindset, that of cyberpunks sticking it to evil governments and corporations, to this age of Trump and Brexit. His battle is not today’s battle. Maybe we need to think a little less about crypto, 0-days, and surveillance, and a little more about epistemology, information ops, and winning hearts & minds. Most controversially of all, maybe we need to stop being so reflexively anti-government / anti-megacorp, and take a more nuanced view of massive organizations and their many tentacles and subdivisions. They might become tomorrow’s enemies of freedom, as ever more power accrues to them; but today’s enemies are an entirely different, and far more dangerous, popular movement.