Your Notifications tab on Twitter might be getting a little more busy. The company recently added a new feature to this section on both mobile and web, which aims to clue you into what people you follow are up to – including whether they’re tweeting about a particular Twitter trend, sharing a link to a buzzing news article, or even following another user’s account.

If this sounds familiar, that’s because Twitter’s ability to track and alert you to this information has existed for years. But before it was only delivered via push notifications. It’s now appearing in the same tab where you track the activity surrounding your own account and tweets – like who’s retweeting you, favoriting your tweets, or following you.

This information first became available in September 2013, when Twitter rolled out a new notification type that aimed to help you stay “in the know,” it said. The feature itself had been developed via Twitter’s experimental account, @MagicRecs, where it had tested how to better personalize its service to end users. It then turned these “interesting activity” recommendations into push notification on iOS and Android, which you could toggle on or off.

We first noticed the new addition to the Notifications tab when a number of Twitter users began to tweet about change.

Twitter confirmed with TechCrunch that the feature, which was not officially announced, rolled out to users last week across iOS, Android and web. It says its goal is to make sure that people don’t miss content that may be interesting to them.

Some people may have seen the feature appear as far back as late last year. That’s because Twitter tests new additions like this with select groups of users before making them more broadly available. But in this case, the feature wasn’t just randomly A/B tested. Twitter says it was rolled out to certain types of users last year, before becoming available to all.

While everyone technically has the feature now, that doesn’t mean you’ll see it all the time. The notifications themselves are triggered by signals that differ from user to user.

As is often the case when it comes to Twitter product updates, not everyone is thrilled about the change. To some extent, this could be because of a bug that was sending the notifications more often than it should. This has been fixed now.

Why is this shit in my notifications @twitter … pic.twitter.com/xiK0v5j7tW

This new "feature", where Twitter notifies me that some random peole are tweeting about a random topic… sucks.

Another new twitter feature no one asked for apparently pic.twitter.com/NfRUX9iQvV

Twitter can you not fill my notifications tab with all this crap pls pic.twitter.com/UPw7J2UT5v

Why oh why is Twitter putting day-old breaking news stories in my notifications tab? #nonono pic.twitter.com/YSHpG7YLV6

But the larger issue is that Twitter’s Notifications tab is an area of the app users check on a regular basis to see activity associated with their content, not what others are up to – like what subjects people are tweeting about, links they’re sharing, or the people they decided to follow.

Arguably, the Notifications tab is fairly busy as is, due to the way it mixes in more minor notifications – like favs and retweets – with more critical ones, like replies.

But Twitter wouldn’t be the first to combine updates related to your personal content with those from across your wider network, all in one area. Facebook does this, too. In its notifications section, it alerts you to a wide range of updates – including not only who liked or commented on your own posts, but also updates on ongoing threads you participated in, friends’ birthdays, posts from select friends and Pages, events, and much more.

Instagram, on the other hand, separates out the activity from your wider network under the “Following” tab of its notifications section (under the heart icon), which makes it easier to see just the activity around your own posts within its “You” section. 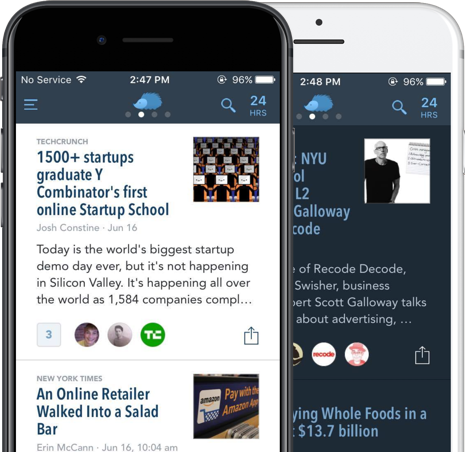 It makes sense that Twitter would move more deeply into this area, given there’s already a market for “personalized top news” pulled from Twitter.

For example, third-party app Nuzzel works with your Twitter account to highlight the links your friends are sharing. It’s a useful way of finding what’s popular, without having to tediously scroll through your Twitter Timeline.

With this new feature, however, Twitter could reduce the need for Nuzzel.

As for the user backlash, it comes down to the challenges Twitter faces in building features to aid newcomers, which can impact its growth and bottom line. These changes tend upset its longtime power users, who aren’t in as much need of discovery tools.

There is some good news if you fall into that latter camp, though.

Twitter says if you don’t want these new notifications, you can tap on the down arrow next to the notification and choose “see less often.”