Netflix’s booming subscriber growth, announced in the company’s earnings last week, is also being felt on the App Store, where its app has again become the top earner in terms of revenue. According a recent report from app store analytics firm Sensor Tower, the app in Q2 saw 233 percent revenue growth year-over-year to $153 million in the most recent quarter. That’s up from the $46 million seen at this same time last year, across both top app store platforms, and on the iOS App Store alone.

This level of growth puts Netflix far ahead of the average revenue growth across both app stores, which is currently at 56 percent. In other words, Netflix’s move up the revenue charts isn’t just tied the ongoing growth of the app ecosystem and its related app businesses, but is attributable specifically to Netflix’s ability to add new subscribers.

Last week, the streaming service reported it had added 5.2 million subscribers in the quarter, which was more than the 3.2 million it had expected. The majority, or 4 million-plus, of those subscribers came from international markets, which can also help to explain the App Store revenue increases. Often, new Netflix users are signing up for the streaming service via their phones and then paying through in-app purchases.

Netflix’s revenue in the second quarter was up by 32 percent, to $2.79 billion; in the prior quarter, it saw 36 percent revenue growth, to reach $2.48 billion. However, these figures take into account the revenue generated by subscribers across platforms – including mobile, desktop computers, set-top boxes, and elsewhere.

With 233 percent growth across the app stores, Sensor Tower’s report rightly points out that Netflix’s mobile revenue is far more pronounced than the revenue being generated by non-mobile platforms.

Netflix is also outpacing its streaming rival Hulu, whose app store revenue grew by just 22 percent during the quarter, the report also noted. 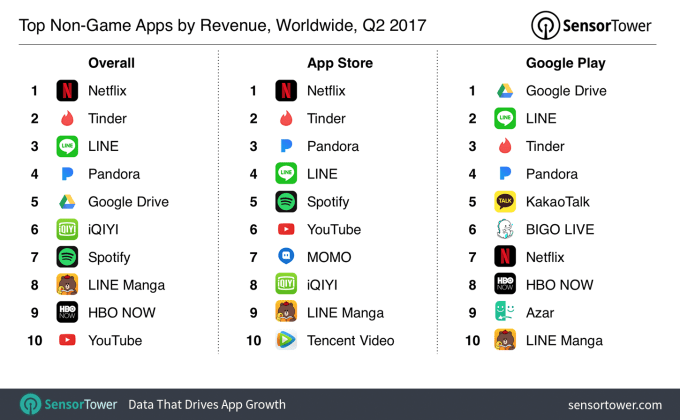 One of the big draws for Netflix – as the company said itself during its earnings – its is slate of original content. This has been a huge investment for the company in recent years. Netflix said previously that it plans to invest $6 billion in original content this year, including 40 feature films. The company has been willing to pay top dollar for movies, too, as with its $90 million+ investment in its first potential blockbuster, the Will Smith fantasy epic “Bright” or Martin Scorsese’s $100 million-plus mob movie “The Irishman.”

Netflix even issued a challenge of sorts to the Hollywood movie industry in its earning release, noting that it now plans to disrupt the movie business as it once disrupted TV.

“…just as we changed and reinvented the TV business by putting consumers first and making access to content more convenient, we believe internet TV can similarly reinvigorate the film business,” the statement read.

Beyond Netflix, a number of other subscription-based businesses hit the top revenue charts during the quarter, too. On the iOS App Store, Pandora clocked in at #3 pointing to some gains for its premium subscriptions; Spotify was #5; and YouTube, which offers subscriptions via YouTube Red, was #6.

Across both the iOS App Store and Google Play combined, Pandora was #4, Spotify #7, YouTube was #10 and another streaming service, HBO NOW, also popped up in the #9 slot. The full report from Sensor Tower, which focused on non-game apps’ growth and revenue, is here.