Clearly, Wall Street didn’t do a good job with its predictions, but Microsoft had a great quarter. Unsurprisingly, its stock is up after the earnings release.

As usual, all eyes are on how Microsoft’s Azure cloud computing platform performed. While Azure’s growth has slowed down a tiny bit over the last few quarters (and we’re still talking close to 100 percent annual growth), it’s one of the main drivers of Microsoft’s top-line growth. In the last quarter, Microsoft reported $6.8 billion in revenue for its “Intelligent Cloud” business (which includes more than just Azure) and said its annual cloud run rate was $15.2 billion. This quarter, this area delivered revenues of $7.4 billion (up 11 percent from last year) and the commercial cloud annualized run rate is now up to 18.9 billion. 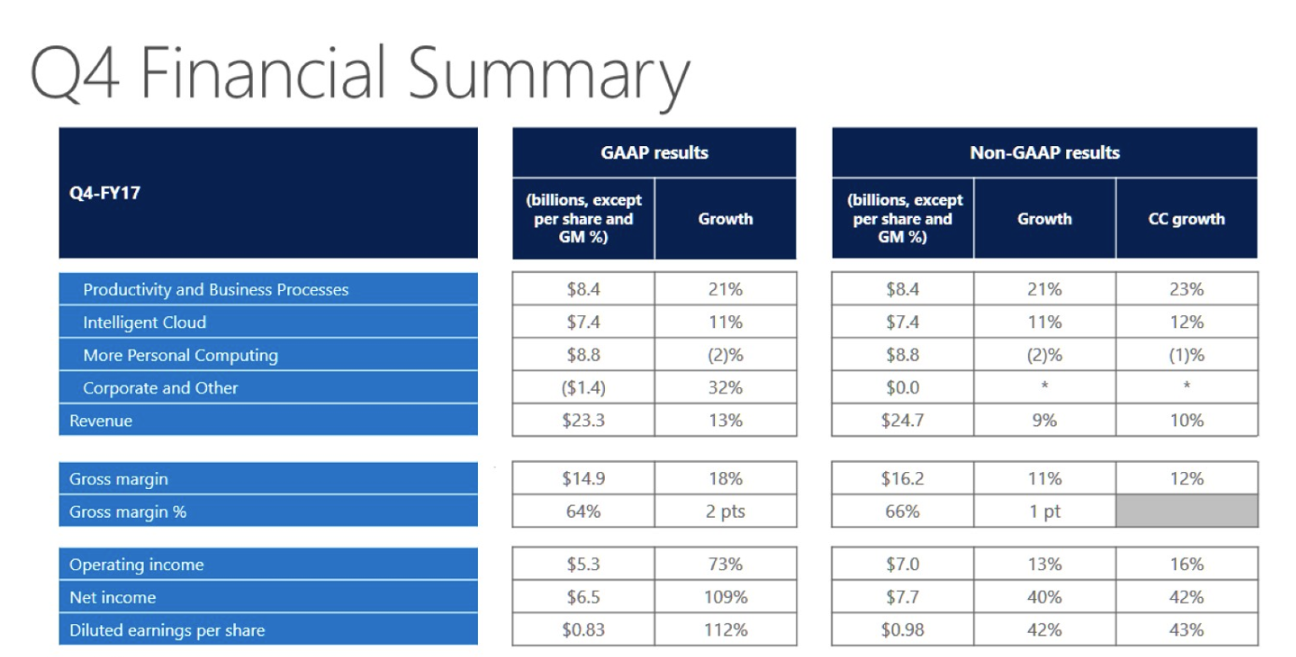 “Innovation across our cloud platforms drove strong results this quarter,” said Satya Nadella, chief executive officer at Microsoft, in a canned statement. “Customers are looking to Microsoft and our thriving partner ecosystem to accelerate their own digital transformations and to unlock new opportunity in this era of intelligent cloud and intelligent edge.”

Additional highlights here are a 15 percent growth in server products and cloud services and Azure growing at a more than healthy 97 percent year-over-year (with Azure compute usage also doubling from last year).

Microsoft also said that its installed base for its Enterprise Mobility product has now hit more than 50 million.

Microsoft’s gross margins in this area also got a healthy boost. After the release, Stephanie Rodriguez, Microsoft’s Director of Investor Relations, told me that that she sees two drivers for this: the introduction and customer adoption of higher-value services and Microsoft’s ability to improve its own efficiencies as its product portfolio gains scale. “This was a really big quarter for us in terms of our commercial base,” she told me. “What we saw was increased customer commitment to commercial cloud and really great renewals.”

In the last quarter, Microsoft’s More Personal Computing segment took a hit because the company sold significantly fewer Surface devices than in previous quarters. Over the last few months, Microsoft launched a number of new devices, including a new Surface Pro and its first real laptop. These didn’t go on sale until late in the quarter, though. Analysts expected about $8.61 billion in sales for this segment and Microsoft delivered $8.8 billion, down 2 percent.

The reason for this, Microsoft argues, is lower phone revenue (“phone revenue was immaterial and declined $361 million,” Microsoft writes), though this was offset by growth in search, Windows and gaming revenue. The number of Xbox Live active users is holding steady at about 53 million and search revenue grew 10 percent year-over-year (likely driven by the integration of Bing into Windows 10).

Office 365 and the rest of Microsoft’s productivity tools have also long been a fast-growing segment for the company. This quarter, Microsoft reported revenue of $8.4 billion (up 21 percent) for this area. In our conversation, Rodriguez noted that Office 365 now also has 27 million customers on the consumer side.