This spring, Amazon introduced Alexa to a wider audience by making the virtual assistant a feature that could be accessed within the retailer’s main shopping app. However, that integration – which allows you to ask Alexa about news, weather, basic facts, or use the assistant’s add-on “skills,” among other things –  was available only for iPhone users. This week, Alexa is arriving on Android, as well.

Amazon hasn’t made a formal announcement about the launch but, when asked, the company confirmed the integration is indeed rolling out this week.

Looks like Alexa was just added to the Amazon app for Android! Who wants to try playing Deal or No Deal from their Amazon app? :) pic.twitter.com/vnxBW11pA8

It still seems a little odd for Alexa to be integrated with the Amazon shopping application, given that Amazon has a standalone Alexa app already available.

But Amazon is likely relying on its flagship app’s massive reach to market Alexa’s capabilities to a broader customer base – including those who may not quite understand yet what Alexa is or what she can do. It’s sort of like a way to try a demo of Alexa without actually having to buy an Echo or other Alexa-powered device.

Plus, given that Amazon’s app already had voice capabilities for things like checking on orders or finding products, it makes sense to simply augment those existing commands by integrating Alexa’s more powerful assistant.

As with the Alexa that ships on Echo speakers and other gadgets, the in-app version of Alexa can perform a similar set of functions, including answering basic factual questions about people, places, dates, music, sports and more, or give you an update on your daily news through the Flash Briefing feature, and more.

Alexa can also dole out information on weather and traffic conditions, or even play music for you while you shop within the Amazon app.

The in-app Alexa also lets you control smart home devices (to an extent), or use other Alexa skills that let you do things like play a game, order an Uber, place your Starbucks pick-up order, and more. 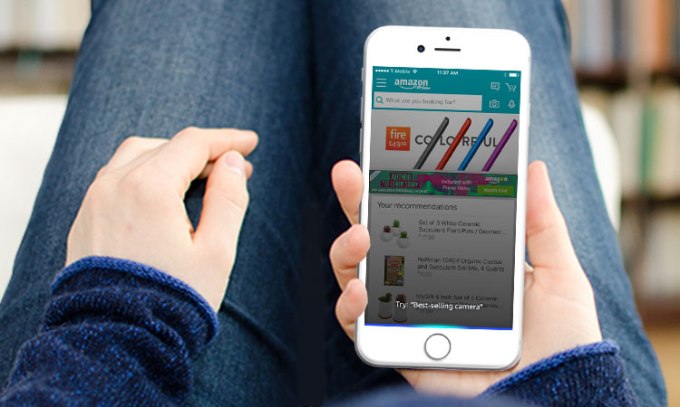 Above: Alexa in the iOS Amazon app

It doesn’t seem like Amazon shopping app users would really need to perform these sort of tasks from their Amazon app, but again, this feels more like an Alexa demo than an everyday use case. The idea is to get consumers familiar with Alexa, which could encourage them to purchase a hardware device, like the Echo or Echo Dot, to bring her into their home.

The Alexa feature isn’t live for all Amazon app users on Android at this time.

In fact, it seems that current Echo device owners got an early heads up on the integration by way of the Alexa companion app. In the Alexa app, a notification appeared alerting to a new Alexa device being automatically added to users’ accounts. (See above tweet). The new addition, as it turned out, was the Amazon mobile app. Surprise!

The notification card also includes options to customize Alexa, or dismiss the card.

As far as we can tell, there isn’t any new Alexa functionality included with the Android launch – it’s just now becoming available to Android users in addition to iOS. Like most releases of this scale, the feature is rolling out gradually, rather than hitting all users at once.