Today Google officially launched “feed” in its main iOS and Android apps. Finally, technology has evolved to bring us personalized news without a social graph or personality quiz. Instead, Google combines the most important news stories of the day with ones about topics you’ve previously searched. That last part will strike some as a creepy misappropriation of sensitive data. But once people start scrolling, they might find those recycled insights quite delightful.

A genius solution to the problem that killed Google Plus

You don’t friend anyone, so there’s none of the filter-bubble echosphere problem of Facebook. You don’t manually follow publishers, so you don’t have to plant flags at a particular end of the political spectrum like on Twitter. And you don’t “Like” content, so there’s no pressure to support something out of guilt, pity or social obligation.

The Google feed (lowercase?) instead looks at what’s popular around your town and the world, tying you closer to your community. Controversial news topics show a sliding carousel of different sources to widen your perspective. And Google understands that your interests wax and wane over time, so if you stop searching for something the algorithm allows that topic to atrophy in your feed. 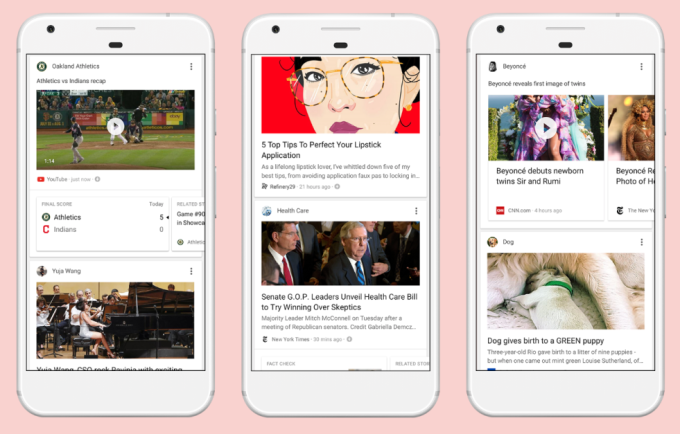 The lack of your friends’ endorsements for links means you’re never persuaded to click something you didn’t think you cared about. Perhaps that trades the filter bubbles of a few friends for a solo filter condom. But we already have so many sources of spontaneous social content discovery. After testing since December, the launch of Google’s single-player feed adds something different to our mix of apps.

Instead of spotlighting its core incompetency in social, Google leverages its core competency knowing everything you do online thanks to its ownership of search, email, calendar, maps, YouTube and the Android operating system. The Google Now brand is being retired, and its utilitarian alerts about traffic and appointments relegated to a secondary tab in the Google app. But the underlying technology that pulled data from your Google app ecosystem had been wisely repurposed as signals about the news and entertainment you desire.

The Google feed’s greatest flaw is its lack of depth. Facebook brags that it chooses just the best 200 stories from around 3,500 it could show you each day. That’s in part because it’s had years to learn what you Like. After a few vertical swipes, Google has a tough time correlating your searches with current news, and the feed’s relevance starts to plummet. But at least the Google app seems cognizant of its shallow content pool, deterring further browsing past the first 10 links by forcing you to tap a “more stories” button instead of infinitely scrolling.

All in all, this feed is a genius solution to the problem that killed Google Plus: No friends. Rather than create a copycat feed that depended on them and fell short in their absence, Google purposefully built a ghost town that treats their omission as a feature, not a bug.