Messaging apps today are one of the most popular ways consumers communicate today, not just with each other but, increasingly, with businesses and services. Now there are signs that we could see another big player enter the messaging fray, alongside more established services from Facebook, Snapchat, Wechat and more.

Amazon appears to be sounding out the market on a new service called Anytime, a full-featured, standalone messaging app for smartphones, tablets, PCs and smart watches designed to let people chat with text and video, send each other fun photos with filters, play games and engage with other Amazon services like music and food ordering (and other shopping), and interact with businesses. 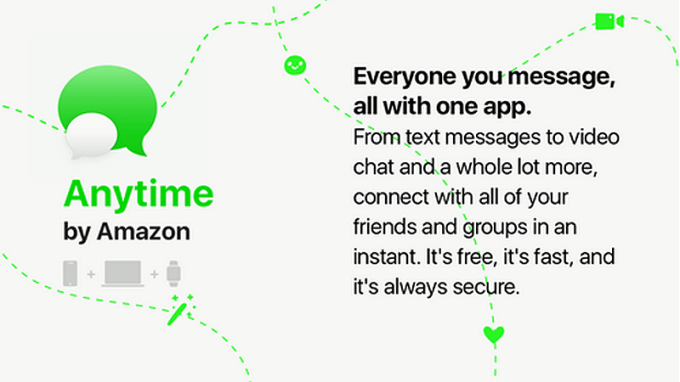 The company has been running a survey getting feedback on the new app, according to AFTV News, which has published screenshots detailing the Anytime name and some of the features, provided by a user who claimed to have received the survey.

The description in the survey notes that the app would also allow people to connect to each other without needing to know their phone numbers — a common connector among other messaging apps like WhatsApp or Viber. “Reach all your friends just using their name. No numbers needed,” it notes.

One thing to flag is that one of the survey’s pages shared by AFTV also contains a typo in a section describing privacy on the app: “Keep chats private and encryt important messages,” it reads. This could point to this either not being a real survey from Amazon, or someone in Amazon’s market research team failing to run a spell check. It wouldn’t be Amazon’s first typo. 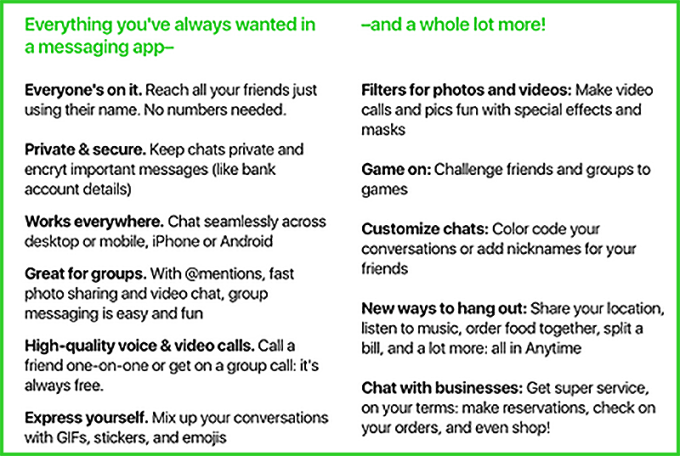 We have reached out to Amazon to ask about all of this. The company has acknowledged the question but has not provided a response. In the meantime, we’ve looked around and can’t find any clues on the internet so far that point to the existence of Anytime.

However, the idea of Amazon launching a consumer messaging app is not that far-fetched. There are a number of reasons why:

For starters, Amazon has already been building messaging services, both for enterprises and consumers.

On the enterprise front, the company’s AWS division released a communications service called Chime earlier this year that includes both messaging and videoconferencing features. The app is built in part using technology that Amazon picked up through its acquisition of talent and technology from a few different startups, including videoconferencing app Biba and meeting productivity service Do.

Interestingly, as we noted at the time that we uncovered proof of the Biba acquisition, the company could easily use the technology for enterprise services (and it appears that it has), but there was a chance it could also find its way into consumer products as well. This could be one of those products.

Also notable is the fact that Amazon has already started to dip its toes into consumer communications, namely with Alexa Calling.

As we pointed out when the free calling and messaging service was launched in May, we thought it was notable that Amazon was from the start expanding the communications experience outside of the Echo-device ecosystem: people could also use their Alexa apps — on smartphones and other hardware — to communicate with each other.

It makes a lot of sense that Amazon would develop a more focused, standalone messaging experience as a progression of that.

There is also Amazon’s long game to consider. Back in 1998, nearly 20 years ago, Amazon acquired a startup out of Boston called PlanetAll, which might best be described as a very early predecessor to Facebook (right down to the Harvard pedigree).

Jeff Bezos, Amazon’s founder and CEO, at the time noted that PlanetAll was “the most innovative use of the Internet I’ve seen… It’s simply a breakthrough in doing something as fundamental and important as staying in touch. The reason PlanetAll has over 1.5 million members–and is growing even faster than the Internet–is simple: it creates extraordinary value for its users. I believe PlanetAll will prove to be one of the most important online applications.”

Wise words, considering what Facebook has come to represent in our world today. However, Amazon ended up shutting down PlanetAll in 2000, incorporating some of its recommendation technology into its Marketplace.

Notably, it has held on to PlanetAll’s social networking patents (as well as the PlanetAll.net redirection to Amazon.com). What we are seeing now could be one of Amazon’s moves to reenter into this space.

There are other hints we’ve had at TC that there has been a larger social network strategy underway at Amazon. One tip we got in 2016 sums it up: “Someone needs to do some investigating on Amazon’s new top-secret social media platform that is said to rival Facebook,” it read. “This is not Goodreads, this is something totally different that will integrate with Amazon.” (Amazon never replied to our request for comment at the time we got that tip.)

I speculated in May that Alexa Calling could have been related to this; Anytime (or whatever the app’s name may be) could be, too.

There are also other precedents here that are worth noting. Rakuten — described as the “Amazon of Japan” by some — acquired its own messaging app, Viber, in 2014. Viber is now working on more integrations with other Rakuten services, including shopping recommendations.

Messaging services have evolved a ton over the last couple of years, and now are used for much more than simple text messaging and free calls. Facebook and apps out of Asia like Line and WeChat have led the charge with new features like AI-based bots for users communicate with businesses and to pick up information, and ways to buy items, play games and more.

Amazon has had mixed success with social selling (whatever happened to #AmazonCart?) but all the same, my guess is that it doesn’t want to lose ownership of whatever customer transactions may be happening on these platforms. Having its own messaging service — an extension of the conversations users are already having with Amazon via Alexa on the Echo — would let it create more tightly integrated experiences, such as group food ordering and group music listening. In keeping with how Amazon has been developing products like the Echo and its Fire tablets, it tries to build in synergy with its other products from the start.

We’ll update this post as we learn more. (And if you know something about Anytime or any of Amazon’s other movements in social, get in touch.)

Update: No response from Amazon, but a reliable source confirms that the company has been working on a new messaging app.

“I have heard it called Anywhere internally for a while,” he said. “Amazon may [instead] try to use the Fire branding. But I think that will not happen. The thing is this is a full on social network type of expansion, with social shopping as a part of it.”

He also added it may be a different name altogether and could encompass other features: Amazon’s Twitch and Alexa teams have been collaborating lately, too, on ways to create more social shopping experiences that involve chatting and video, he noted.

Here’s something else to ponder: when I wrote about Amazon quietly acquiring Biba, I noted that the company it made the transaction under the name “Justin Acquisition” rather than Amazon, and wondered if it was a long-term reference to Amazon building more messaging tools that might play into some of the messaging inroads it has already made with Twitch. The gaming network has been offering a standalone app called Twitch Messenger for some time now.