Following a host of delays, Kano is finally shipping its latest coding product for kids, the Pixel Kit. It’s cute, compact and colorful and is aiming to light up kids’ imaginations.

The device, which retails for $79.99, bears some resemblance to a pixelated Lucite Etch A Sketch, but at its heart the kid-friendly gadget is all about getting kids to engage with technology and learn that they can create and shape what electronics do.

Kids assemble the components and learn to control the device through the company’s software suite, which can help them get used to the fundamentals of coding. By building pixel art in a methodical way, the Pixel Kit has the benefit of getting kids engaged with art and tech at the same time.

The Pixel Kit joins Kano’s growing list of products, like the Kano Computer Kit and Screen Kit. While the other devices retail for $150 each, the more accessible price point on the Pixel Kit should make it an easier buy for parents intrigued by the concept.

The London-based Kano Computing has raised $15 million from investors to help it create the bright and intuitive kits, but it has also relied heavily on Kickstarter, raising $1.4 million and $643 thousand in a pair of campaigns.

The latest campaign, taking place in September of last year, showed off three new products: the Pixel Kit, a Camera Kit and a Speaker Kit.

Check out an in-depth look from last year on Kano’s new suite of devices here. 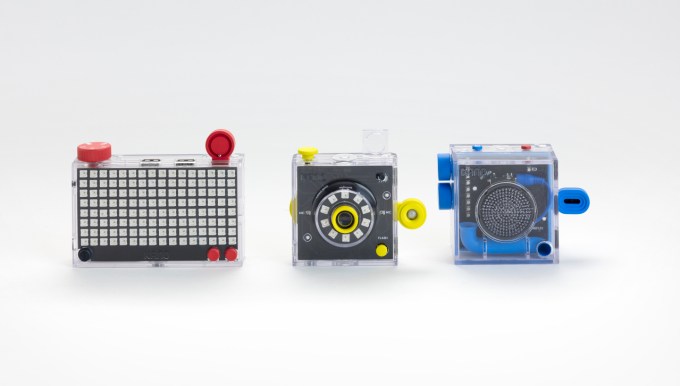 While the Pixel Kit is arriving several months later than its December 2016 target ship date, it’s hitting a price point that is even cheaper than its backers paid (that price being $99; the target retail price was $129.99).

The company is now shifting efforts to the other kits, though, at this date, Kano had told backers they would be shipping the last of their three products, instead of just the first. The company has not established any updated estimates for their later devices according to recent comments on its Kickstarter campaign.

The Pixel Kit is available online for $79.99 at the company’s site.