It’s worth noting that while men are slightly more likely than women to be harassed online (44 percent versus 37 percent), women are more likely to be sexually harassed online. For example, 53 percent of women surveyed reported receiving explicit images they did not request.

Pew last completed a survey like this back in 2014. At that time, 40 percent of those surveyed reported experiencing online harassment and 73 percent reported seeing it happen to someone else. That means there’s been a slight increase in online harassment since 2014.

Unsurprisingly, social media is where people are most likely to experience online harassment, with 58 percent of those harassed saying the most recent incident happened on a social media platform. Also unsurprising is the fact that more than half of people harassed don’t know the person harassing them.

On doxing, trolling, hacking and swatting 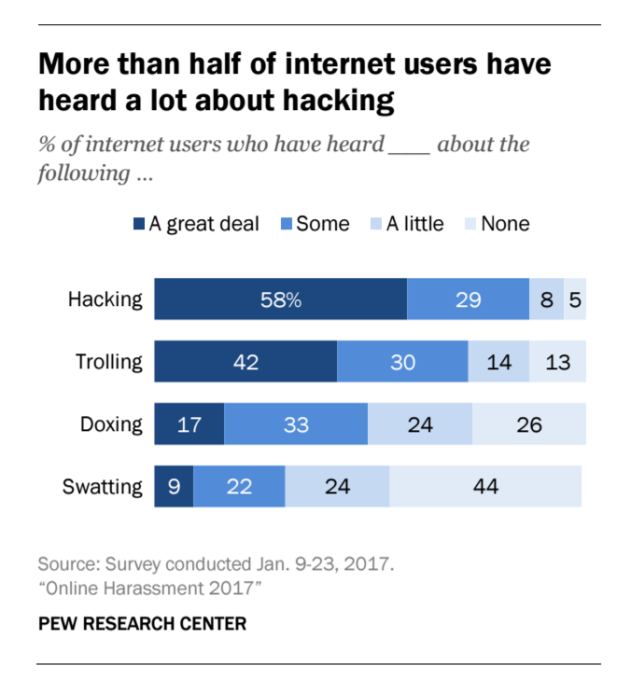 Pew also explored “emergent” forms of online harassment, like doxing (posting someone’s personal information online without consent), trolling (intentionally trying to provoke or upset someone), hacking (illegally accessing someone’s accounts) and swatting (when you call 911 for a fake emergency and have the police show up at that person’s house).

“While many Americans are not aware of these behaviors, they have all been used to escalate abuse online,” the report states.

To be honest, I was not familiar with doxing or swatting before about a year ago. And it seems that other people on the internet have mixed knowledge and awareness about those forms of harassment.

There are 85 pages of content to explore in the report, which you can check out here.