Dave McClure has resigned as general partner of 500 Startups, TechCrunch has learned. We have confirmed co-founder Christine Tsai asked for his resignation and he accepted, according to a letter sent to limited partners today.

We reached out to 500 Startups for comment and they also confirmed the resignation. McClure had already stepped down as CEO.

In the letter sent to LPs, Tsai says that she and the management team feel that it is in the best interest of the long-term success of 500 for Dave to step down completely from all GP entities and the firm overall. 500 has dozens of different investment vehicles spread around the globe.

Tsai also says that the firm has been made aware of another sexual harassment report against Dave — which it investigated and determined was unacceptable behavior.

Tsai says that the firm cannot be certain that there won’t be future reports of harassment so it needed to remove Dave. But, as it cannot do so without his consent as a co-founder and GP, it needed his cooperation. He has agreed to resign.

Over the past week, McClure has been at the center of a storm of trouble for 500. A New York Times article outlined incidences of sexual misconduct including unwanted advances on founder Sarah Kunst. After the article, McClure published a public mea culpa admitting to multiple incidences of inappropriate behavior towards women in his position at 500. Just last night, 500 Startups had to apologize to its Australian partner LaunchVic for not disclosing its internal investigation into sexual harassment claims against McClure.

There are still questions about the timing of the internal investigation, McClure’s removal and his continued involvement with firm activities. More on that later.

The full text of the letter sent to LPs is below: 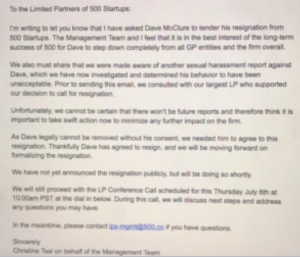