In the nascent connected speaker market, consumers appear to be gravitating toward the more affordably priced Amazon Echo Dot, according to new e-commerce sales data released this morning by Adobe. However, Google’s decision to release its Echo competitor, Google Home, in November paid off well, the study found. During the 2016 holidays, Google Home was able to outsell both Amazon Echo and Echo Dot, before losing ground to the Dot in the first quarter of this year.

Overall, Adobe’s report paints a picture of a respectable market for voice devices, but one it says is “not massive” yet, adding that the devices are “not quite a household item.”

However, it is one that’s steadily growing. Online sales grew 39 percent year-over-year, says Adobe. And the devices were especially popular gifts during the holidays — 3 out of 4 voice devices were sold during that period. 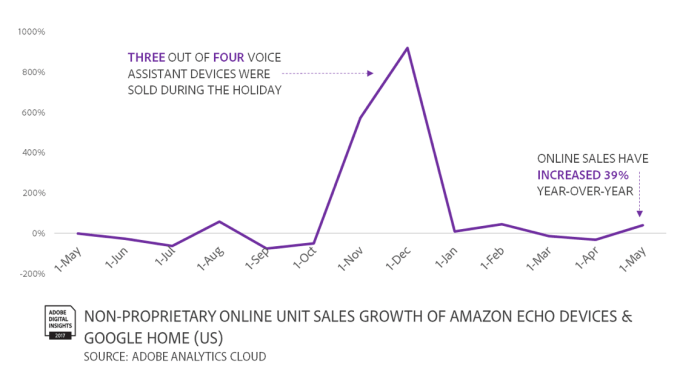 Adobe’s findings for this report were based on an analysis of 14.3 billion visits to online retailers from May 2016 to May 2017, measured by Adobe Analytics Cloud, as well as 14.5 million social mentions around voice assistants and voice assistant devices, tracked by Adobe Marketing Cloud.

However, this data doesn’t paint a complete picture of the market for smart speakers, because it’s tracking online retail sales that are taking place outside of Amazon and Google’s own storefronts. Clearly, those sites are responsible for a large number of sales for these voice-powered speakers — figures Adobe doesn’t have.

Consider instead, this a window into the market, rather than a definitive snapshot.

That said, there are still some interesting trends to be found.

For example, Google Home lead the pack in terms of revenue, both before and after the holidays. 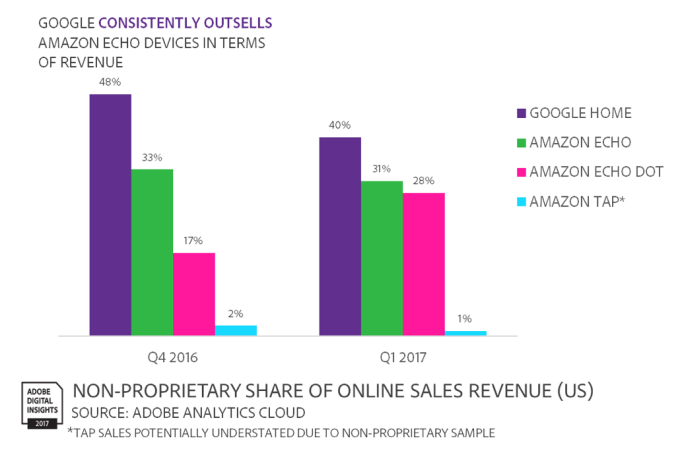 During the holidays, Google snagged 48 percent of revenue, compared with 33 percent for Echo, 17 percent for Echo Dot and just 2 percent for Amazon Tap. Afterwards, Google dropped to 40 percent, but still topped Echo’s 31 percent, Echo Dot’s 28 percent and Tap’s 1 percent. (The Tap sales may be under-represented here, Adobe says, because of the source of this data.)

Google Home also sold more units than the Echo Dot during the holidays, but just barely, accounting for 39 percent of unit sales versus Dot’s 38 percent. The original Echo held a 21 percent share during this time.

After the holidays, though, the Dot quickly caught up in terms of unit sales, topping Google Home with a 53 percent share compared with Home’s 30 percent. 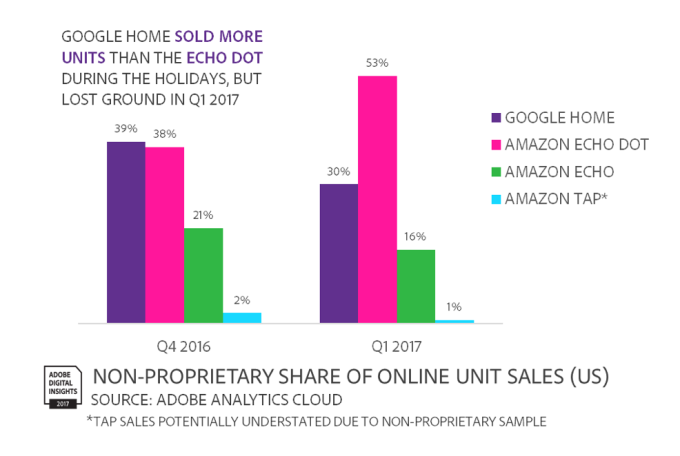 These figures indicate that Google Home’s launch timing played a big role in being able to give it a boost over Amazon devices during the holiday shopping season. But it’s also a reflection of the data in this analysis itself — that is, sales from non-proprietary retailers in the U.S. just don’t tell the whole story.

The full study also looked into other aspects of voice assistants, like social mentions and custom interactions pulled from IFTTT’s service. Siri still leads in terms of social buzz, though Samsung’s Bixby saw a bit of a spike when announced in March.

Meanwhile, there are now 778,000 connections to voice assistants on IFTTT — like those that sync your Alexa To Do List with your iOS Reminders app, for example. That figure grew 6.4 times in 2016, and has grown 4.3 times in 2017. 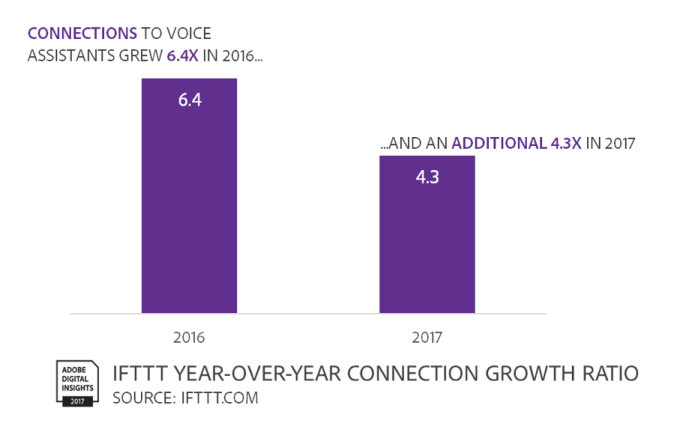