LiveLike, the service that partners with sports broadcasters to create and host their VR viewing experiences, is going social.

As a refresher, LiveLike’s VR experience is a “virtual suite” overlooking the field, where you can select different camera angles, look around the suite, view pre-produced content, etc. We’ve looked at the experience before, and think it’s much more interactive than VR solutions that just provide viewers with a floating screen to watch the game.

And now you’ll be able to do this with friends. Starting with the CONCACAF Soccer Gold Cup next week, users in the Fox Sports VR App (made by LiveLike) will be able to watch with their friends.

Upon opening the app, users will be able to connect to Facebook and join a room with any of their Facebook friends who have also downloaded the app, or can select a random option where they are put in a room with three other viewers. 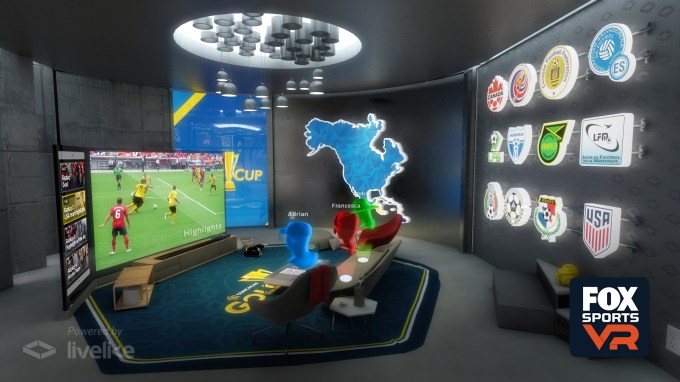 In the app you appear as an avatar (which is basic, but still slightly customizable) with your name above, and can turn and talk to your friends while watching the game. LiveLike explained that they’re using 3D audio, meaning your friend’s voice will get louder when you look at them and quieter when you turn back to the action, making the experience feel a little more real.

And to make it more accessible for everyone, you now don’t even need to have a headset to use the app. Users can still download the app on their phone or tablet and experience a slimmed-down version — basically they can scroll and pan around and see everything they’d see if they were actually in VR.

LiveLike is planning to put this social feature in every deployment they do going forward, but cautioned that there is a chance some partners may not want the feature in their broadcast. But outside of that, LiveLike sees these social features as the future of their platform.

Eventually the startup wants to build in community-focused functionality, like the ability to watch the game in a virtual room with other fans from your team. And this community aspect could convince fans to increase the time they spend in VR, which may help transform it from a novelty into an experience people actually prefer over traditional TV, especially if they are watching alone.

Here’s a video of what LiveLike’s experience looks like now (without the new social features).