Blue Apron — the next big consumer IPO for 2017 — isn’t looking as good as it was just a few weeks ago.

The company said in an updated filing with the Securities and Exchange Commission that it would cut its IPO price range target to between $10 and $11 per share, down from between $15 and $17 per share. Normally these price ranges move around, but this is a pretty significant haircut for a company that looked like it was having a better 2017 aside from heavy burn on marketing and growth.

If the company priced at $10 it would put its valuation just under $2 billion (including the option for underwriters to purchase additional shares, or the “greenshoe”). That was Blue Apron’s valuation in 2015 when it raised $135 million in a venture financing round. Sometimes this is a set up for an IPO pop the next day — investors and the companies like to see around a 20 percent bounce or so — but it still means that the reaction from investors may have been more tepid than expected.

It can be easy to point to Amazon’s massive $13.7 billion bid for Whole Foods nearly two weeks ago as a major sticking point for Blue Apron’s IPO. Whole Foods would immediately give Amazon hundreds of nodes in residential and metropolitan areas that have the capability of handling fresh food and produce. That’s no doubt a huge question mark for Blue Apron going forward. But Blue Apron’s challenges go beyond a competitor like Amazon and were already somewhat apparent in the company’s financials when it first filed to go public.

In the first quarter of 2017, Blue Apron lost more than $52 million on revenue of around $245 million. That’s almost as much as it lost in all of 2016 — when it burned through $54.8 million — as it began aggressively spending on growth. One of Blue Apron’s problems, in particular, is branching beyond metro areas where the brand is well known among younger audiences. That requires a ton of marketing spend, as well as looking into marketing in new kinds of venues like more traditional campaigns.

In the first quarter this year, Blue Apron said it had 1.04 million customers, up from 649,000 customers in the first quarter of 2016. The company also said it had 879,000 customers in the fourth quarter of 2016, and that growth has been somewhat rocky over the past several quarters. To be sure, it is growing, but it’s probably less consistent than investors might like given the big ramp in spending on marketing. 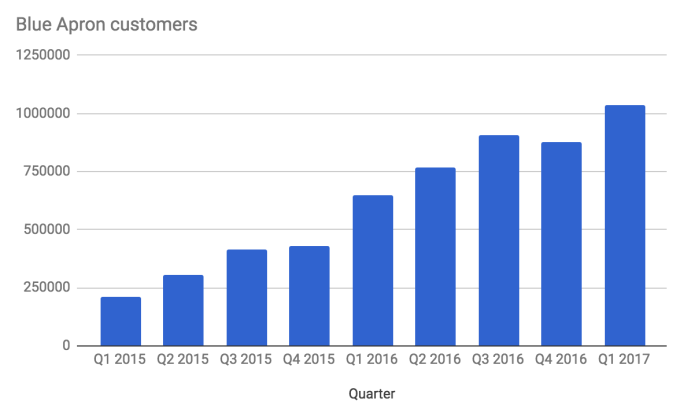 Its orders, too, are rising rapidly — especially a big jump between Q4 last year and Q1 this year — but it still has to effectively acquire a customer and return the value on what it spent marketing to that customer. Services like Blue Apron may have been effective initially through word of mouth and promotions, but as it gets more and more expensive to acquire customers the company has to figure out ways to keep them for a longer amount of time in order to earn back that spend. As of Q1 this year, Blue Apron says the average customer orders 4.1 meals.

Blue Apron is looking to raise more than $300 million in the IPO, a move that will shore up its war chest as it looks to expand into broader markets. At the midpoint of the last price range, Blue Apron would have been valued at around $3 billion.

So Blue Apron is in a semi-tricky spot: it’s a growth story, but it’s also coming after the major whiff from Snap that sent its shares spiraling downward after a successful IPO and the following scrutiny on new IPOs. Amazon definitely didn’t help by potentially becoming an existential threat right in the middle of its road show to woo investors. Blue Apron, it would seem, will be going out the door with a much more conservative range (though it’s likely to change again, as these tend to do) in order to maximize the success of its IPO. It just means the leading digit might be a little lower than we’d all expected.