Whale, the Q&A app backed by Twitch co-founder Justin Kan, has gotten a major update and refreshed design that makes it easier to discover video content on the service.

The iOS-only app launched in October 2016, pivoting from a music app after Kan was inspired by Chinese Q&A service Fenda. The goal was to enable users to ask questions or get advice from subject matter experts, such as investment or product development tips from Kan. It used a payment mechanism to incentivize users to respond to questions with the promise of earning cash, but it has now scraped that approach — and a whole lot more — with this update.

More widely, Whale has adopted a Tinder-style swipe mechanism to help you find questions that are interesting to you quickly and easily. The app serves up questions that have been asked to users you follow. Swiping right on a question indicates that you are interested in hearing the response and, if and when that video is posted, it will then show up in the ‘Watch’ tab of the app. A subtle option in the top-left corner of the ‘Explore’ (swipe) tab lets you find people to ask questions to.

Finally, the third tab — ‘Answer’ — is where you can find the questions that you have been asked by other Whale users. 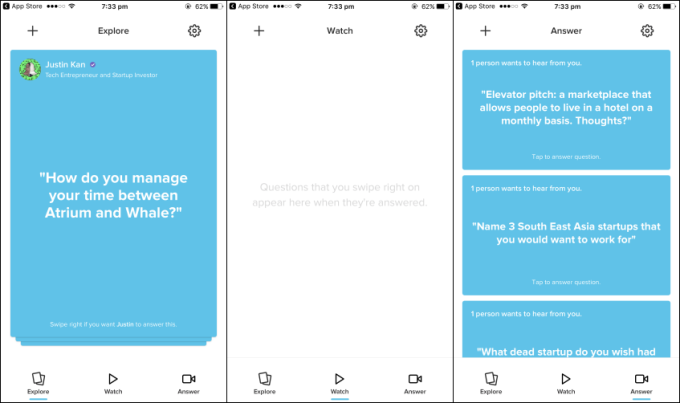 For now, Whale is dispensing with user profiles and follow/following on the grounds that they were never central to its design, but it will return them to the app in a future update, according a post on Medium. User profiles have also temporarily been removed, but they too will be back. One thing that won’t return, however, is the Facebook log-in option. Whale has instead go all-in on Twitter because it is “the platform that best mirrors one’s interest graph.”

As for the currency incentive, the team conceded that it was complicated for new users to understand. And, for those who did get it, Whale found that most content was available for free, while some users hoarded coins rather than spending them.

“Ultimately, we see Whale as a place for learning and making authentic connections with people so the coins got in the way of this mission. If you purchased a coin pack, we’ll contact you regarding a full refund,” the company said.

I liked Whale when it first launched, but, as time passed I found myself using it less and less even though there are plenty of compelling videos there. That may well have been down to discovery, so I’m quite interested to see whether this wholesale change will increase my usage of the service going forward.

As for Kan himself, he was initially fairly hands on with Whale, but he has since launched other projects that are likely impacting his availability now.

In March he launched his own incubator, Zero-F, which plans to start two or three companies per year. Whale is one of the original batch, but his two others have been busy lately. Newly launched legal startup Atrium just landed $10.5 million in funding, while ScriptDash rebranded to Alto and raised $23 million to pursue a nationwide expansion.