Dating apps are, in their own way, a form of social networking – especially as they expand into new areas like friend-finding or professional networking. So it only makes sense that they would adopt video as well, given the growing popularity of the format on social apps like Facebook, Instagram and Snapchat, as well as the industry’s larger embrace of “Stories” as a means of offering an angle into people’s lives, activities, and interests.

This week, both Hinge and Zoosk’s Lively are rolling out support for video, each in their own way.

Hinge, for example, will now allow users to augment their user profiles on the service with video. The company says users can add videos up to 30 seconds long, by pulling from those that already exist on their phone. However, it’s shying away from short-form, disappearing videos like those found in Instagram, Snapchat, or Messenger “Stories.” 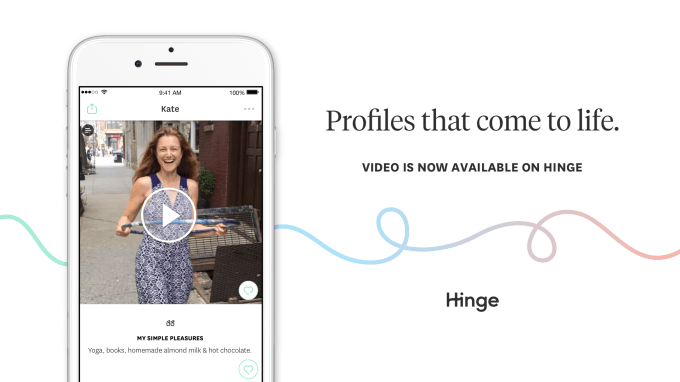 In fact, Hinge will not prompt people to take a front-facing video at all, only those pre-recorded or previously shared to Facebook or Instagram. (The videos imported from social networks can be longer than 30 seconds, Hinge notes.)

Instead, Hinge believes support for videos will allow members to better show who they really are, by sharing fun or memorable moments and activities from their lives. This continues the dating service’s larger mission of helping users find relationships, not casual encounters.

​”​On Hinge we encourage our members to be authentic with one another because we know that leads to the best connections,” explains Hinge founder and CEO Justin McLeod. “Our profiles already do a great job, but video creates the opportunity for our members to learn about potential matches in a way that simply can’t be captured with still photos and text.​”

The company will also encourage video adoption, too, by showing Hinge profiles with video to five times more people it says.

Meanwhile, Zoosk’s newer product Lively is hoping to capitalize on video to bring more people to its app.

Launched last summer as a product from the company’s R&D group, Zoosk Labs, Lively had adopted video from the get-go. In Lively, users upload photos and videos that are then turned into story collages, which also include transitions and movement.

Again, the idea is that using video can show off someone’s personality much better than static, photo-only profiles.

Now, Zoosk is pushing the bar even further in terms of video with the launch of live video chat. The feature, which will be public on Wednesday morning, is designed to help users make connections with people that extend beyond dating.

In the updated app, users will be able to pick a topic and start chatting with others who are also available to chat. But unlike with Lively’s profile videos, the chat feature allows users to start their session with their screen blurred. This helps users instantly feel more comfortable, the company explains, without having to worry about what they look like right away.

“Lively is about creating fun ways to help people connect, not just match,” says Zoosk’s SVP of Product Behzad Behrouzi. “We’re hoping to create an overall experience where people can feel more relaxed being themselves, and more excited to meet and get to know other people.” 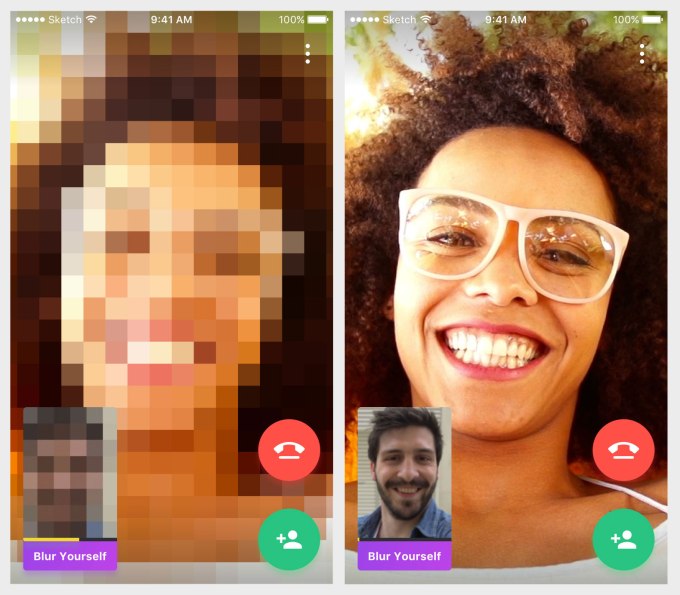 This feature will push Lively beyond dating to help users just generally meet new people. This trend is not one that’s limited to Lively. Top dating apps like Tinder, Bumble and others have also adopted friend-finding features as of late, as they become more like social networks. And Bumble is preparing to launch into professional networking in September, with the debut of BumbleBizz.

Shortly after, Bumble will roll out its own video support as well.

Announced in January, BumbleVID will allow users to share video “stories” on their profile. Bumble says it decided to hold the feature back because it would make more sense from an engineering perspective to launch it in the rebuilt app arriving this fall. That version of the app will support BumbleBizz, but will also introduce features that let you craft different profiles for dating, friends, and professional networking. 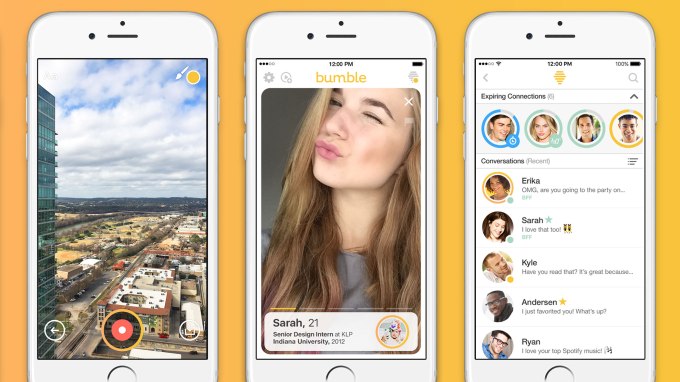 Similar to Snapchat and Instagram, Bumble will support short-form videos recorded live or in the past 24 hours, which can be either posted to your profile for all to see, or only shared with matches.

Also like Stories on other social apps, these videos will vanish in a day. However, a later version of the app will allow for a semi-permanent way to keep them. (More to come on that this fall.)

Again, Bumble’s interest in video has a lot to do with how the company feels the format will help users show more of themselves, which is the common thread between all the dating apps’ embrace of video.

“It’s more of a way to storytell, and express yourself beyond a photo,” explains Bumble co-founder CEO Whitney Wolfe, “but in a way that was native to how we in our audience already use social media video. We didn’t want to reinvent the wheel – we wanted to just take what was already working well in other platforms, and give them the opportunity to do that with people they don’t know yet, versus their friends,” she says.

But these newer dating apps like Lively, Bumble and Hinge aren’t alone in making video a key feature in their updated user experiences. Even longtime dating giant Match.com is getting into the video game. 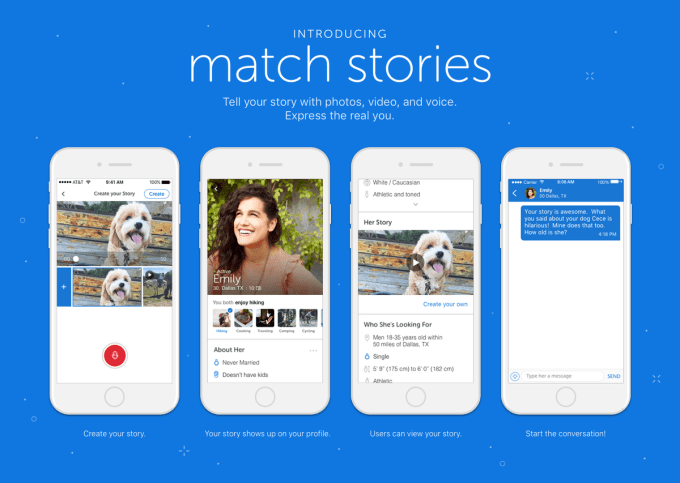 The company this week announced its plans for a Stories feature, too. In Match’s case, the stories can stretch to 60 seconds, as compared with Bumble’s 10-second videos, for example. And they’re meant to be a combination of photos and videos, similar to what’s available on Lively. Plus, you can narrate the content if you’d like, to describe the imagery you’re showing.

“It gives people flexibility,” Match CEO Mandy Ginsberg explained earlier in an interview with Mashable. “Hearing someone talk about their photo is far better than just seeing the photo. Seeing a video and hearing their voice is, I think, the holy grail in terms of figuring out your attraction.”

Match says Stories will launch into testing in the “coming weeks,” with a national rollout planned for later this year.

Video chat, however, is not on Match.com’s public roadmap, nor Bumble’s, nor Hinge’s.

This is likely because of the additional overhead that comes with allowing users to chat live, not only from a product and engineering standpoint, but also from a community safety perspective. It also may not be necessary – after all, if two people enjoy chatting with each other a lot, what usually comes next is a request along the lines of, “let’s get off this app.”

Lively’s video chat launches tomorrow, around 9 AM PT. Hinge’s video is live now. Match and Bumble will roll out video later this year.